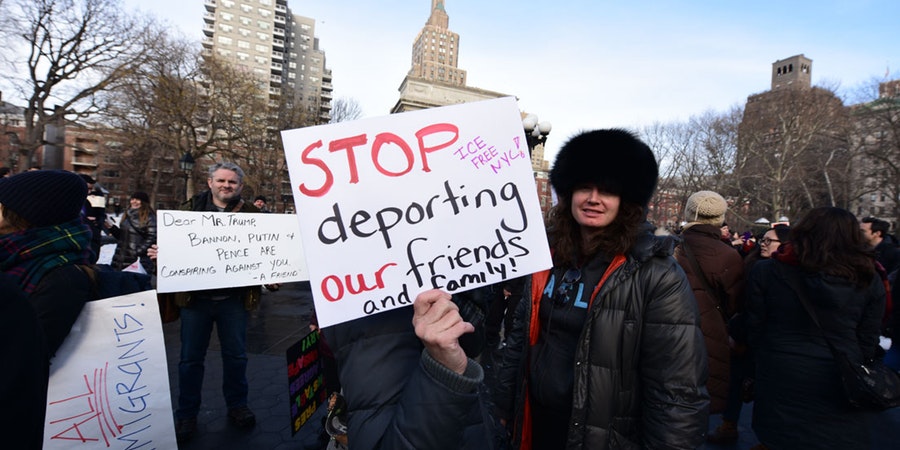 In the United States, a sanctuary city (or in some cases, a sanctuary county) is a local jurisdiction that limits its cooperation with federal immigration enforcement authorities. Most sanctuary policies involve two components: 1) local law enforcement or other city or county employees are not permitted to ask about a person’s immigration status; and 2) local jails will not hold individuals who have broken local laws longer than required so that Immigration and Customs Enforcement (ICE) has time to detain them. The idea of sanctuary cities arouses strong moral passions. For some, the term “sanctuary city” evokes images of a local community resisting unjust immigration enforcement, while for others it connotes lawlessness and disorder.

In “From Strangers to Neighbors: Towards an Ethic of Sanctuary Cities,” Gary Slater argues that the ethical meaning of “sanctuary” embodied in current sanctuary city policies throughout the United States is actually relatively thin; sanctuary city policies limit the cooperation of local government agencies with federal immigration enforcement, but in themselves do not create communities in which immigrants are welcomed as neighbors. As Slater puts it, “The upshot of the legal/ethical distinction with respect to sanctuary cities is that of an ethically negative space at the local level, one that can be filled with various forms of religious life in light of turning strangers into neighbors. An ethics of sanctuary cities can build on this necessary but insufficient set of policies to articulate a more robust vision for the fulfillment of sanctuary’s potential” (p. 60). Slater appeals to Catholic social teaching to develop a more positive ethic of sanctuary and provide the “robust vision” needed for local resistance against current immigration enforcement policy.

Slater notes that although Strangers No Longer: Together on the Journey of Hope, the Catholic bishops of the United States and Mexico’s 2003 pastoral letter on migration, offers a rich theology of migration, “There is an unresolved tension regarding border security and the right of migrants to seek better lives” (p. 65) that renders the letter’s application to sanctuary city policy ambiguous. Slater refers specifically to paragraph 39 of the letter:

The Church recognizes the right of a sovereign state to control its borders in furtherance of the common good. It also recognizes the right of human persons to migrate so that they can realize their God-given rights. These teachings complement each other. While the sovereign state may impose reasonable limits on immigration, the common good is not served when the basic human rights of the individual are violated. In the current condition of the world, in which global poverty and persecution are rampant, the presumption is that persons must migrate in order to support and protect themselves and that nations who are able to receive them should do so whenever possible. It is through this lens that we assess the current migration reality between the United States and Mexico.

The tension this and similar passages creates between the rights of migrants and the authority of the state to enforce immigration law “detracts from the ability to ground the principles of Catholic social teaching within the specific contexts needed. . . . [T]he abstract principles [the letter] invokes could in fact support either side of this issue” (p. 67). By seeming to give the sovereign state the primary responsibility for the common good, and linking that responsibility to controlling the border, the letter could be interpreted as an argument against sanctuary city policies.

As Slater mentions, he is not the first to note this tension in Strangers No Longer, and I myself have explored it in a post here at Catholic Moral Theology. Slater believes that this tension creates a serious drawback for developing an ethic of sanctuary, but I believe that understood in the broader context of Catholic teaching, the framing of the issue by the US and Mexican bishops remains fruitful.

The ethical principles that the bishop propose to guide immigration policy are rooted in the teaching of Pope John XXIII’s 1963 encyclical Pacem in Terris. As Justin Parrish Ashworth notes (as cited by Slater), Strangers No Longer appeals to: 1) the dignity of the human person; 2) the common good; 3) the universality of the common good; and 4) solidarity. Of course, these are also the central principles of Pacem in Terris.

Pacem in Terris presents what the political scientist Daniele Archibugi calls a cosmopolitan model of international order. On the one hand, Pope John insists that we must think of humankind as a single family (#98) and that we must work toward the “universal common good” that encompasses the good of each and every individual who makes up this family (##132, 139). On the other hand, sovereign states remain the primary instruments for working toward the common good, despite the inherent tension between states’ particular interests and the universal common good.

Pope John recognizes that sovereign states will be limited in their ability to promote the universal common good, and therefore he calls for international cooperation among states and the establishment of international institutions to manage issues such as disarmament and economic development that cut across national borders (#137). Nevertheless, John resists the imposition of a world state. Appealing to the principle of subsidiarity, he insists that international institutions must address “problems which, because of their extreme gravity, vastness and urgency, must be considered too difficult for the rulers of individual States to solve with any degree of success” (#140), but must also “create world conditions in which the public authorities of each nation, its citizens and intermediate groups, can carry out their tasks, fullfill their duties and claim their rights with greater security” (#141).

This call for limited but real authority for international institutions, according to Archibugi, is one feature of the cosmopolitan model of international order. A second is a concern for those individuals who move from one state to another because their rights are not fully respected in their home country, or those who are even rendered stateless as a result of violence or persecution. For example, the philosopher Immanuel Kant called for a “cosmopolitan law of hospitality” in which strangers would be treated with respect in foreign nations. Focusing more particularly on refugees and migrants, Pope John states that “Refugees cannot lose [their] rights simply because they are deprived of citizenship of their own States” (#105), and he therefore calls for recognition of the right to migrate, although like the US and Mexican bishops, he claims that the duty of states to accept migrants is conditioned by what “the good of their own community, rightly understood, permits” (#106). Building on the principles of Pacem in Terris, in a 2010 address, Pope Benedict XVI calls for international coordination among states to ensure that the rights of migrants and refugees can be respected and that wealthier states exercise their responsibility to welcome them.

There is certainly a tension between the rights of migrants and the authority of the sovereign state to control its borders in Strangers No Longer, and in Catholic social teaching more broadly, but this tension must be seen in the context of Catholic social teaching’s cosmopolitan ethic. Slater is right to note, though, that this tension is particularly acute when examining the issue of sanctuary cities, “which represent less a transnational framework than a subunit within a nation-state and which represent concrete conditions whose relationship to both national and transnational frameworks is not always clear” (p. 66). As the above citations from Pope John XXIII and Benedict XVI suggest, Catholic social teaching has more readily appealed to international institutions to address the limitations or failures of states in achieving the common good, and not “subunit[s] within a nation-state.”

Nevertheless, there is no reason why the principle of subsidiarity could not be applied in such a way that these subunits, or “intermediate communities” as they are often called in the documents of Catholic social teaching, could address the failures of the state in achieving the common good. Indeed, in his 1961 encyclical Mater et Magistra, Pope John XXIII insists that “We consider it altogether vital that the numerous intermediary bodies and corporate enterprises . . . be really autonomous, and loyally collaborate in pursuit of their own specific interests and those of the common good” (#65). Although Pope John envisions a collaborative relationship between the state and these intermediate communities (whether they be private or public), the issue of sanctuary cities raises the possibility of a situation in which local communities play a role in ensuring the rights of individuals when the state is unable or unwilling to do so. Local communities might exercise subsidiarity as a form of resistance against unjust policies of the state, in this case unjust immigration enforcement policies.

Although Slater is right that Catholic social teaching has been relatively silent on the question of sanctuary cities, the above reflections show that the cosmopolitan ethic of Pacem in Terris and Strangers No Longer has resources available for developing an ethic of sanctuary. This cosmopolitan ethic centers on the dignity of the human person and the rights that flow from it, including the right to migrate. As Slater notes, the tension inherent in this cosmopolitan ethic arises from the central responsibility given to the sovereign state in achieving the common good, even though the common good is universal and therefore transcends the interests of any particular state. On the question of migration, this tension is reflected in the authority given to the state to control its borders, in seeming conflict with the right to migrate. Nevertheless, Catholic social teaching attempts to resolve this tension in two ways: 1) by calling for international institutions that can address the universal common good and protect the rights of persons when states fail to do so; and 2) by appealing to the principle of subsidiarity, which calls on the state to make room for local, intermediate communities that can foster solidarity or fraternity. Sanctuary cities can be seen as one embodiment of the latter, a form of resistance to unjust immigration enforcement policies that attempt to protect the rights of migrants and contribute to flourishing communities. Catholic social teaching therefore provides more robust and substantial support for the constructive proposals outlined by Slater elsewhere in his essay than his initial assessment of Strangers No Longer might suggest.