Fraternity and Solidarity in Pope Benedict XVI’s Caritas in Veritate 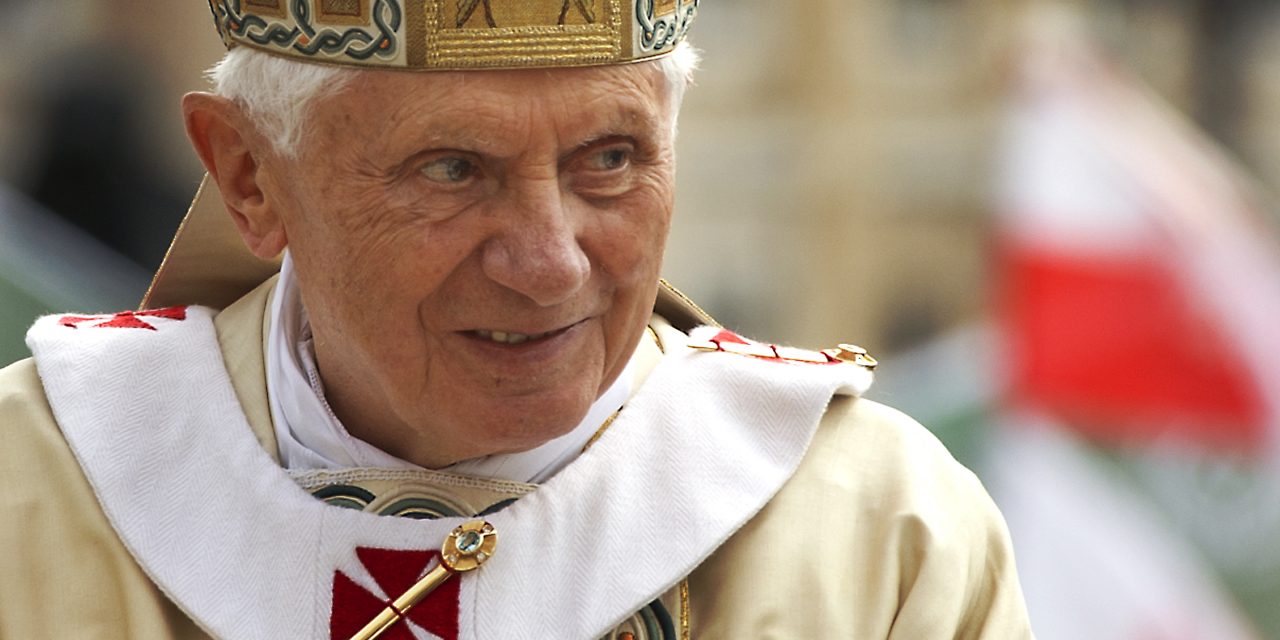 The documents of Catholic social teaching are a treasure store that reward repeated reading. I recently learned from reading a commentary on Pope Benedict XVI’s Caritas in Veritate by the Italian economist Stefano Zamagni that in the encyclical, Benedict makes it a point to distinguish the terms “fraternity” and “solidarity,” two terms that on the surface seem fairly similar. In Zamagni’s view, this represents a development in Catholic social teaching. Zamagni describes the difference in this way: “solidarity is the principle of social organization that enables unequals to become equals, fraternity is the principle that allows equals to be diverse.”

What does he mean here? Zamagni goes on to explain that struggles for equal dignity and equal rights are struggles of solidarity, for example the labor movement and the civil rights movement in the United States. He is less clear on what fraternity entails. He writes that fraternity “allows people who are equal in dignity and in their fundamental rights to make different life plans, or to express their charisma in different ways.” What this means is not entirely clear; fraternity seems like it ought to be something that binds people together, and it is not clear how tolerating others’ “different life plans” fits the bill.

What Zamagni means by fraternity becomes clearer when he links it with the concepts of reciprocity and gift exchange, forms of economic exchange that he contrasts with the exchange of equivalence. In the latter, the value of goods and services are figured ahead of time, and an exchange is considered fair and just when the goods and services exchanged are deemed equal in value. In reciprocal relations, by contrast, one person gives the other a gift he or she believes will be good for that person, with the understanding that at some later point the other will reciprocate with a gift of their own, but with no expectation that the return gift will necessarily be equal in value to the one first given. Zamagni’s distinction between solidarity and fraternity therefore becomes clearer. In an exchange of equivalence, the persons exchanging goods or services are treated as equals, but they are also treated as abstractions since the exchange is motivated primarily by mutual self-interest. In contrast, in a reciprocal or gift exchange, the persons relate to one another as unique individuals and act for the good of the other person.

Pope Benedict’s usage of the terms “solidarity” and “fraternity” (and the associated term “reciprocity”) is somewhat fuzzy, but by and large bears out Zamagni’s analysis. For example, he sometimes uses the terms side by side as if they are distinct (for example, no. 13). More importantly, the terms seem to function somewhat differently in the encyclical. He associates solidarity, for example, with the concept of justice. In paragraph 35, he makes the case that the economy should not only be characterized by commutative justice, “which regulates the relations of giving and receiving between parties to a transaction,” but also by distributive justice and social justice. An economy exhibiting these three types of justice would demonstrate “internal forms of solidarity and mutual trust.” He likewise associates solidarity, justice, and the common good in paragraph 38.

Solidarity is also associated with the state, although not exclusively so. For example, in paragraph 36 immediately following the above discussion of justice in the economy, he claims that the state has the principal responsibility for ensuring that the economy is oriented toward the common good. Elsewhere he writes that “traditional forms of the social state” (i.e., the welfare state) are an embodiment of solidarity (no. 25). Later on he adds, however, that solidarity “cannot . . . be merely delegated to the State,” arguing that there must be space for exercises of solidarity within the economy distinct from the efforts of the state (no. 38).

Benedict is less clear what he means by “fraternity”, and he uses this and the related term “reciprocity” less frequently than he does “solidarity.” There are some clues to what he means by the term, however. He suggests that fraternity extends beyond justice without excluding the latter (no. 34). Elsewhere he elaborates on this point, stating: “Reason, by itself, is capable of grasping the equality between men and of giving stability to their civic coexistence, but it cannot establish fraternity. This originates in a transcendent vocation from God the Father, who loved us first, teaching us through the Son what fraternal charity is” (no. 19). Therefore, fraternity is not just something that transcends justice and the equality of persons, but is also closely linked to the concept of gratuitousness that Benedict draws on throughout the encyclical.

Benedict also links fraternity and reciprocity with the traditional principle of subsidiarity. For example, he writes that “By considering reciprocity as the heart of what it is to be a human being, subsidiarity is the most effective antidote against any form of all-encompassing welfare state” (no. 57). He goes on to propose that the principles of subsidiarity and solidarity ought to balance one other, to avoid the extremes of “social privatism” and “paternalist social assistance” respectively. This suggests, in line with Zamagni’s analysis, that fraternity signifies a more personal form of relationship in smaller-scale communities, whereas solidarity represents a more impersonal regard for the dignity and equality of all persons.

Along the same lines, whereas solidarity is associated primarily, although not exclusively, with the state, fraternity is associated above all with civil society. Indeed, the third chapter of the encyclical is entitled “Fraternity, Economic Development and Civil Society.” He claims that civil society is “the most natural setting” for fraternity (no. 38), although the primary thrust of that chapter is that fraternity must extend from civil society into economic life. One of the most original aspects of Caritas in Veritate is its proposal of business enterprises that embody fraternity, reciprocity, and gratuitousness.

All that being said, in some instances the encyclical is less clear about the distinction between solidarity and fraternity, in fact using the terms almost interchangeably. For example, in one passage he writes that “the principle of gratuitousness and the logic of gift as an expression of fraternity can and must find their place within normal economic activity” (no. 36). Elsewhere, however, he recommends “economic forms based on solidarity” to open the market to “reciprocal gift” (no. 39). Are these passages expressing different ideas, or making a similar point using different language? It is unclear.

Is Benedict’s distinction between fraternity and solidarity a helpful one? Daniel Finn, in another commentary on the encyclical, points out that the term “fraternity” itself does not work well in English, not only because for most Americans the word immediately conjures up university Greek life, but more importantly because the gendered language undermines the intent to “allow equals to be diverse.” But what of the underlying concept?

It is worthwhile to contrast Benedict’s treatment of fraternity and solidarity with his predecessor Pope John Paul II’s understanding of solidarity (the term “fraternity” does not appear in any of his tree social encyclicals). In John Paul’s most detailed treatment of solidarity in Sollicitudo Rei Socialis, he defines it as “a firm and persevering determination to commit oneself to the common good; that is to say to the good of all and of each individual, because we are all really responsible for all” (no. 38). This definition is quite similar to Benedict’s usage of the term, and in fact he cites this definition in Caritas in Veritate (no. 38). On the other hand, in Centesimus Annus he writes that it is civil society, or as he describes it “intermediate communities,” that “give life to specific networks of solidarity” (no. 49). These communities prevent society “from becoming an anonymous and impersonal mass” and help it to become more “personalized.” Here “solidarity” seems to be more similar to what Benedict means by “fraternity.”

Is there some benefit, then, from distinguishing fraternity from solidarity? On the negative side, by using the term “solidarity” to describe both a virtue developed within the more intimate or personal communities of civil society and a commitment to all members of the human family, John Paul’s account more clearly brings out the connection between these micro- and macro-level relationships. Through smaller-scale communities, we learn to open our hearts in a way that then carries over to becoming “really responsible for all” on a wider scale. On the other hand, in Caritas in Veritate there are only hints of a similar relationship between fraternity and solidarity. John Paul’s views, in which solidarity is fostered in and through subsidiary, seems more satisfactory than Benedict’s description of subsidiarity and solidarity as opposing principles that must be balanced.

In John Paul’s philosophical works written before his election to the papacy, however, he distinguishes between two types of human relationships: “I-Thou relationships” and “I-We relationships.” The former are more personal and ideally involve a more complete form of self-giving, while the latter are more impersonal but also capable of exhibiting solidarity and a shared commitment to the common good. He also envisions two forms of common life characteristic of these two types of relationship, distinguishing between “community” and “society.” These two forms of common life ought to be mutually reinforcing, with communities fostering the virtues needed for life in society, and societies creating space in which communities can flourish. The similarities between this line of thinking and Benedict’s treatment of fraternity and solidarity are clear. Distinguishing the latter two terms, then, does usefully distinguish these two types of relationships while also providing a way to think about the relationship between them.

Whether or not the concept of “fraternity” will join the canon of Catholic social teaching alongside more traditional concepts like “solidarity,” “subsidiarity,” and “the common good,” only time will tell. Zamagni’s commentary on Caritas in Veritate, however, provides the valuable service of clarifying what Benedict is up to in the encyclical and helping us think through what a society of solidarity and fraternity might look like.

Should shame make a comeback?

Women in the Church