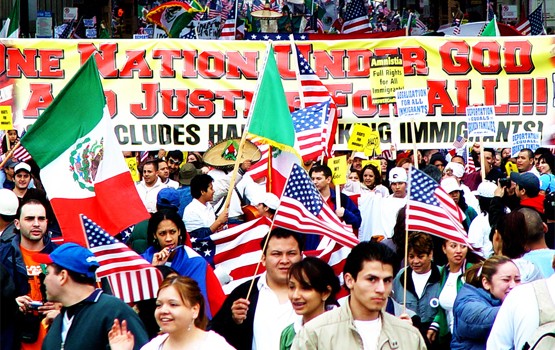 Today is May Day, and across the country people will be taking to the streets to protest against the Trump administration’s immigration policies. Although May Day has traditionally been considered a day of struggle for the rights of workers, in recent years in the United States it has come to be associated with the rights of immigrants, as well. In 2006, for example, over a million people nationwide joined protests against harsh immigration measures then being considered by the U.S. House of Representatives. Although today’s protests are not expected to come close to those numbers, there will be events in around 200 cities across the country, with the largest being marches in New York, Chicago, Los Angeles, and Washington, DC.

May Day, or International Workers’ Day, was first celebrated by socialists, communists, and others involved in the workers’ movement in the late nineteenth century to commemorate the Haymarket affair, a labor protest that fell into violence in Chicago in 1886. In 1955 Pope Pius XII designated May 1 a feast day of St. Joseph, the Patron of Workers, to counteract the communist connotations of the day and to strengthen Catholic efforts to advocate for the rights of workers. Of course, the rights of workers had been central to official Catholic social teaching since Pope Leo XIII’s Rerum Novarum, in 1891 and even earlier to the work of Catholic labor leaders and other advocates.

Catholic history and teaching provide many reasons why it makes sense to link the rights of workers and the rights of immigrants. In the United States, many of the workers who participated in those earliest May Day protests were themselves immigrants from countries like Ireland, Poland, Italy, and Czechoslovakia, and a good deal of them were Catholics. In later decades Catholics held a significant number of leadership roles in labor unions in the U.S., and the U.S. Catholic bishops and organizations like the Association of Catholic Trade Unionists (ACTU) helped organize and train workers.

In later decades when union opinion was divided on the issue of immigration, Catholics played a significant role in uniting the two causes. For example, Msgr. George Higgins, who long worked on labor issues for the U.S. bishops, argued that labor unions should make efforts to organize immigrant workers, both legal and undocumented, to ensure fairer working conditions for those workers, both as a matter of justice and to prevent unfair competition with American workers.

In today’s political rhetoric, immigrants are often portrayed as a threat to native-born American workers. Immigrant laborers are willing to work for relatively low wages, and therefore drive down the wages of native-born workers through competition. Even in highly skilled sectors like the tech industry, employers are willing to hire immigrant workers over their American counterparts. Catholic social teaching, however, suggests that we should resist the temptation to pit vulnerable groups against one another, particularly when doing so lets off the hook those who are exploiting them.

Catholic teaching makes clear that workers must not only be paid a fair wage and provided with safe working conditions, but that they should have at least some role in the management (if not the ownership) of the business. The availability of immigrant labor can certainly undermine labor unions’ efforts to achieve these goals, which is why in recent decades labor unions have focused on organizing immigrant workers and applying fair labor standards to worker visa programs. In this way native-born and immigrant laborers can work together as a united front.

Since at least the 1970s, the number of workers in the United States who belong to unions has been on the decline, and unions’ political clout has waned. This is certainly one reason for the unions’ alliance with immigrants’ rights groups, although this alliance is not a panacea. Rather, in addition to aggressive efforts to organize workers in untraditional sectors of the economy, such as those in the fast food industry in recent years, unions must find creative ways to communicate with people about the rights of labor and what can be accomplished through activism and organizing. Catholics must be part of these efforts, and happily labor leaders, in particular AFL-CIO President Richard Trumka, have been open to dialogue and cooperation between the labor movement and the Catholic Church. Let us take this May Day as an opportunity to further this cooperation, whether by participating in a protest or in some other way, and help build a society that better promotes the rights of workers and immigrants.