I have just returned from the funeral Mass for Dr. Terry Nichols, a member of the theology department at the University of St. Thomas for the past 27 years.  Although I had only known him for the last 3 years since I joined the department here, my impressions of him have been confirmed by the many comments I have heard from others.  He was tirelessly enthusiastic about his work in theology, and in particular in his dedication to interfaith dialogue as the founding director of the Muslim-Christian Dialogue Center at St. Thomas.

When I first arrived at St. Thomas in 2011 Terry’s office was located adjacent to the faculty lounge where the coffee machine is located.  Since I frequented this locale to refill my cup often, Terry would regularly come out and speak with me in his gentle but passionately engaged manner.  Inevitably, he would be teeming with excitement over some new theological discovery he had made.  I recall him telling me that he received a random email from a Muslim scholar in Iran who was looking for Christian dialogue partners in the West but had been unable to make any connections.  Terry was giddy with excitement about the prospect of meeting with this scholar and his colleagues, and after following up with this gentlemen he eventually arranged for several members of our department to meet with a group of Iranian Muslim scholars in Rome!  These encounters at the watering hole impressed me in two ways.  First, Terry was able to talk about his own intellectual pursuits with enthusiasm that invited me to join him in his joy, rather than promoting his work or his ego.  (If you happen to work in academia, you will know what a rare gift this is!)  Second, he made me feel instantly welcome at St. Thomas, simply by making himself available, asking about my teaching and research, and sharing a brief exchange over freshly brewed coffee.  I just learned today that his hospitality expanded beyond the department, as he and his family had taken into their homes various guests over the years who were in need of a safe place to live and a little extra support.

In his homily at Terry’s funeral Mass earlier today, Fr. Erich Rutten spoke eloquently about Terry’s “restlessness.”  It was a restlessness that often produced anxiety, but it also spurred his work, and probably contributed to his desire to get up out of his chair and talk with me at the coffee machine.  But Fr. Erich also described this as a kind of holy restlessness (what Fr. Ronald Rolheiser might call a “holy longing”), because Terry knew that he could never be satisfied with anything in this life.  In fact, Terry literally wrote the book on Death and the Afterlife (Brazos, 2010), so he knew that true rest will only come in resting in the presence of God in the kingdom of heaven.  Although restlessness and anxiety can be a distraction from the important things in life, the kind of holy restlessness that Terry exhibited helps us to remember to never be satisfied with the things of this world, no matter how important they may be.

It is fitting that we honor Terry’s passing during Holy Week, right before we celebrate the resurrection.  I have never been very good at fasting during Lent or on Good Friday.  I find that letting go of snacking between meals or other forms of fasting produces in me an insatiable urge to pick up something to eat to satisfy the restlessness that fasting produces.  I would imagine that when Mary Magdalene, Peter, and the unnamed disciple first discovered the empty tomb in the reading from John’s gospel for this coming Easter Sunday, they experienced a similar kind of restlessness – a desire to fill that restlessness with understanding.  But Terry’s very being helped me to understand that perhaps that restlessness is there to spur us on the to final goal where the only true rest that we can know is possible.

And may perpetual light shine upon him! 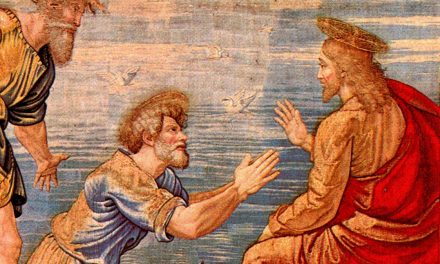