Many who read this blog will be familiar with David Gushee–the powerhouse Distinguished University Professor of Christian Ethics at Mercer.

A first rate scholar, he is a member of the board of the Society of Christian Ethics and has published a number of important books–including the recent The Future of Faith in American Politics with Baylor University Press.  A well-known activist, he has not only written several books for a broad audience, but he is a former columnist on faith for the USA Today and currently serves on the White House nonpartisan advisory ethics commission on torture and detention.  (Also check out his recent NPR appearance with Krista Tippett’s “On Being” show here.) In addition to teaching, serving his Church as an ordained minister, and being a father and husband, he has somehow found a way to direct Mercer’s Center for Theology and Public Life and chair the Mercer Lyceum initiative on rebuilding democracy.

But wait, there’s more.  In the last year he has had three more books come out:

1.  A New Evangelical Manifesto: A Kingdom Vision for the Common Good.  In this book, Gushee not only writes a substantial amount, but gathers voices on a wide-ranging number of topics: human trafficking, healthcare, race, abortion, nuclear weapons, war, and global poverty.  I wrote a chapter titled “Reducing Abortion.”

2.  Yours Is the Day, Lord, Yours Is the Night: A Morning and Evening Prayer Book.  Written with his wife Jeanie, I already use this book to guide (and–lets be honest–push) my morning and evening prayer.  At once connected to the tradition, but broadly ecumenical as well, you can pray along with everyone from Gregory the Great, Martin Luther, Pope John Paul II–and everyone in between.  This book is a treasure.

3.  The Sacredness of Human Life: Why an Ancient Biblical Vision Is Key to the World’s Future.  Cathleen Kaveny’s blurb for this book called it a “magisterial volume” and if anything this is an understatement.  I believe it is destined to became the most important book on this topic for a generation. Though it just came out in 2013 I’ve already adopted it for one of my classes; it is especially helpful for those who would like to give their students great background in ethics, yes, but also scripture and history at the same time.

We in the New York area are very lucky to have Gushee coming to town to speak on the topic of his new book on the Sacredness of Life.  If you are going to be around (or would like to be!) Wednesday, January 30th, please drop by Duane Library’s Tognino Hall (on Fordham’s main Bronx campus) at 5 p.m. for his remarks. 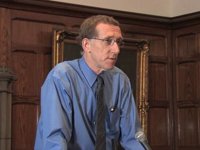