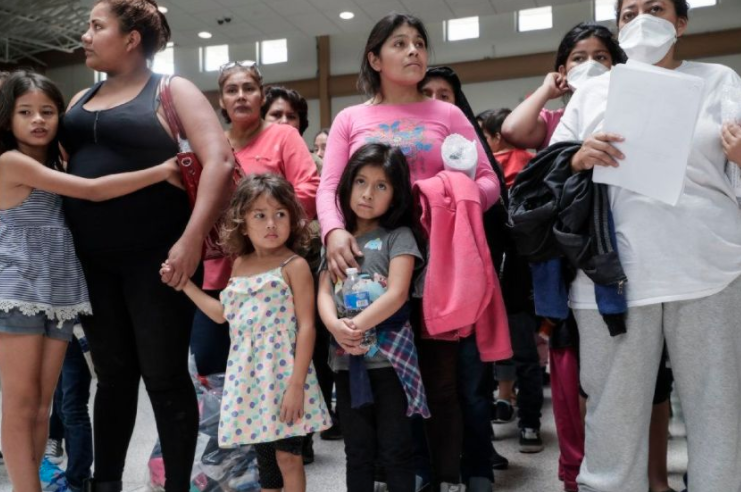 This is the twelfth post in our Conscience at the Polls series and is a guest post by Dr. Victor Carmona. The series is intended to help Catholic voters consider a wide range of issues relevant to the 2020 U.S. Presidential election, with special concern for the common good. Victor Carmona, Ph.D. is an Assistant Professor of Theology and Religious Studies at the University of San Diego. His most recent pieces include chapters on immigration in Value and Vulnerability: An Interfaith Dialogue on Human Dignity, edited by Petrusek and Rothchild (University of Notre Dame Press, 2020) and in Sex, Love, and Families: Catholic Perspectives, edited by King and Rubio (Liturgical Press, 2020). In his research on immigration, Carmona pursues a Catholic and global perspective that is grounded in Latinx points of view.

This election season, Robert McElroy and Mark Seitz, bishops of San Diego and El Paso, set their sights on the corrosive effect that single-issue voting and a nearly exclusive focus on the presidential race are having in the church and broader society. Their words are both welcoming and challenging in the context of border life. They are welcoming because they offer support to Catholics, including many Latinx young adults, who question the notion that one should only vote for a candidate who states an opposition to abortion—challenging because they are a reminder that the task of citizenship is ongoing between elections. Their words help frame the act of voting not just as having to do with avoiding evil but also with doing the good (paraphrasing medieval theologian Thomas Aquinas’ first principle of practical reasoning).

From a perspective informed by a Catholic moral imagination that conceives of the task of voting as doing the good and not just avoiding evil, the need for immigration reform offers a clear starting point in one’s decision-making process (though evidently not the only one). As the bishops of the US and Mexico write in their 2003 pastoral letter, Strangers No Longer: Together on the Journey of Hope:


We judge ourselves as a community of faith by the way we treat the most vulnerable among us. The treatment of migrants challenges the consciences of elected officials, policymakers, enforcement officers, residents of border communities, and providers of legal aid and social services, many of whom share our Catholic faith.

Our country’s treatment of immigrants, refugees, and asylum seekers has worsened during the past decade or so. The Obama Administration’s mass deportations, which it undertook with the assumption that they would motivate Republicans in Congress to support immigration reform, won President Obama the moniker “Deporter in Chief” (fairly or not). President Obama then used his executive authority to protect children (many now in their mid-twenties) who were brought into the US without authorization. Still, the harm to many families and their communities had been done. As for the Trump Administration, its weaponization of border enforcement and the immigration debate has led to an aggressive stance against providing relief to 10.5 million undocumented immigrants, most of whom have deep ties to US communities (62% have lived here for a decade or more, 67% are in the workforce, and 34% own their home). It has also made the program that protects the legal status of nearly 700,000 Dreamers unstable, even after the Supreme Court upheld it. President Trump has also brought refugee admissions to a historically low ceiling of 18,000 per year, even though the United Nations and the US government have vetted them extensively. Finally, his Administration’s treatment of Central American asylum seekers at the border has been nothing short of brutal: from the detention of unaccompanied minors in cages to family separations to remaining in Mexico while awaiting their day in immigration court. Our country’s response to the pandemic has made things worse.

And yet, while our country’s treatment of immigrants, refugees, and asylum-seekers should not be the single issue that determines how one votes, it functions as a useful rule and measure of how well our society has pursued the common good. The way we treat the most vulnerable helps a voter discern the work that our society and its institutions (including government at all levels) need to prioritize to do the good. In making that claim, I am assuming that the pursuit of the common good should drive political decisions by citizens and political leaders alike (elected and unelected). That is becoming harder to take for granted in US political institutions, major parties included, even as the country faces major crises at once—like the Covid-19 pandemic, its ongoing racism epidemic, and its detrimental impact on the environment.

As Strangers No Longer notes, our country’s actions challenge the conscience of many who have been moved to respond accordingly. This election season, I encourage voters to keep three considerations in mind as they discern which candidates to elect to local, state, and federal office to advance the common good, particularly if they aim to do so from a perspective that is informed by our country’s treatment of the most vulnerable among us.

First, immigrants, including the undocumented, do not lead separate lives. After decades of being here, immigrants and citizens have befriended one another; many have even fallen in love. We are bound together in family life and friendships that advance the common good in many places: at school, at work, even at church.

Second, we can change our country’s treatment of immigrants, refugees, and asylum seekers for the better. Our society has used its political institutions to create the current immigration system. We can reform it by electing leaders whose view of the common good will not be so narrow as to assume it only extends to citizens. As the history of US immigration policy shows, we have done so multiple times. That does not imply that immigration reform will be a simple process nor one without sacrifice. In fact, it will require us to face hard truths about the role racism has had and continues to have in our immigration system.

Third, we are electing persons who can serve society by advancing the common good from the office they will hold. Here, Bishop McElroy offers helpful criteria to assess the candidate’s ability to do so: opportunity, competence, and character. Paraphrasing, does the candidate have the ability to discern opportunities to advance the common good? Does the candidate have the competence to create the necessary coalitions to carry out the duties of their office to such an end? Does the candidate have the character to act in a principled rather than a merely partisan way? The act of voting is not just about avoiding evil. A Catholic moral imagination that is rooted in the freedom of the children of God also conceives of voting as an act that offers us the ability to advance the common good across our society. In this series, Michael Jaycox offered an incisive post on the primacy of conscience that speaks to such freedom, which is deeply rooted in Scripture and tradition. I echo his wise words with a beautiful insight from Henri Nouwen, who describes conscience as “the aboriginal Vicar of Christ.” As we discern who to entrust with each of the many offices across the land, may we vote with a freedom that is rooted in Christ’s love.