Human actions are crucial for any moral theology because it is through a human being’s free actions (and free actions = human actions, properly understood) that human beings are moral beings.  As St. Thomas says in the prologue to the second part of his Summa Theologiae, theology’s primary interest in a human being is as the kind of being who is “the principle of his actions, as having free-will and control of his actions.” (ST I-II, prologue).

“Human acts,” as defined by the catechism are not merely anything that human beings may causally bring about.  Rather, a “human act” is what humans “do” through their free and deliberate choices.  All such choices in particular instances can be evaluated as being either morally good or bad choices, and typically lead to good or bad actions respectively.

To morally evaluate a human act, three things must be taken into consideration – the object, the intention, and the circumstances. (§1750)  Note that these are technical terms, whose meaning is not equivalent to the variety of everyday uses of these terms.  “A morally good act requires the goodness of the object, of the end [i.e. intention], and of the circumstances together.” (§1755)

In moral theology, the “object” of an act is a particular good chosen when the human will directs itself to something. (§1751)  By a “good chosen” we mean something that a person considers to be good or worthwhile to do, although it may or may not be actually good.  Or, as the encyclical Veritatis Splendor puts it, “the object of the act of willing is in fact a freely chosen kind of behaviour.” (VS §78)  For instance, my family needs a place to live, so I buy (or build) a house.   Obtaining a house for shelter is in itself a good thing, and short of problematic means to obtain the house, or other evil reasons for buying the house, or other odd cases we can leave aside, we can conclude that buying or building the house (i.e. the freely chosen kind of behaviour that is the ‘object of my act of willing’) to shelter my family in not only an apparent (i.e. intelligible) good, but in fact a real (i.e. the object is) good, and thus, all other things being equal, our reason judges obtaining this house to be a morally good action. (§1758)

On the other hand, say my new neighbour offends me (e.g. by seducing my spouse or by stealing my property) and I become enraged and seek to kill my neighbour.  I choose to kill my neighbour also as a “good chosen” (i.e. an intelligible thing to do).  I may consider it a “good chosen” because I believe it to be an appropriate form of retribution, or an appropriate means to recover the affections of my spouse, or as a means to recover the use of the lawnmower or television that my neighbour stole.  However, while the object of my acting (to kill my neighbour) is intelligible, it is not a reasonable “good chosen” and therefore the object chosen is morally evil.  Why is it morally evil?   Because killing my neighbour for any of the above reasons (nor for almost any purposed reason) is not reasonable.  A discussion of why killing is almost always unreasonable and thus morally evil is an important question, but beyond the scope of this answer.

The “circumstances” are by definition “secondary elements of a moral act”(§1753).  They are the kinds of things that make a good act more (or less) splendid, and aggravate (or mitigate) the badness of a bad act.  But by definition they “cannot change the moral quality of acts themselves.” (§1754)   Buying a house that is within my means, serves the various needs of my family well, and contributes to the improvement of the urban/suburban fabric, are ‘positive’ circumstances that makes the goodness of the act of house buying even better.  If I buy a house beyond my means, or choose to live in a gated community to avoid having to deal with “others” unlike me, or buy a “trophy” house out of vanity, these are ‘negative’ circumstances this mitigates the goodness of my act of buying the house to shelter my family.   If any of these ‘negative’ circumstances form a sufficiently significant motivation in my buying the house, or a ‘negative’ circumstance is sufficiently gravely problematic, then it could render my decision morally wrong.

If a circumstance looms significantly large enough to alter the fundamental description of the act – e.g. I buy the house not only to shelter my family but also because it is perfect for a secret marijuana ‘grow-op’ I wish to soon operate out of the basement – then this is no longer a circumstance, but part of the intention of the act, namely a key part of the good anticipated for which I buy the house.

In recent decades, there has been a tendency both in some kinds of secular (and apparently in some Catholic) ethics to claim that one can not morally evaluate an act according to the object, but only by reference to the “further intention” or motive.  So for example, say I deliberately kill my neighbour, but do so because they are dying and suffering and request that I euthanize them.   Some moralists argue that the fact that I deliberately kill an innocent person does not make the action wrong in itself, that one has to know the motive, and that in some cases the motive of eliminating their suffering can in some cases justify the act, makes it morally acceptable or even good.  The tradition argues that there are some acts (e.g. deliberately killing innocent persons) “which, in and of themselves, independently of circumstances an intentions, are always gravely illicit by reason of their object.”  ((§1756).  This is also an example of what the tradition means when it says “ ‘An evil action cannot be justified by reference to a good intention’  (St. Thomas Aquinas). The end does not justify the means.”  (§1759). 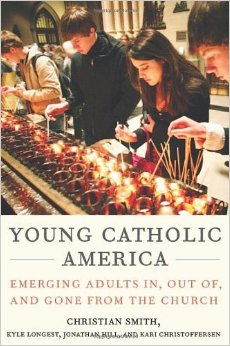 Five Insights from Young Catholic America (You Should Read This)