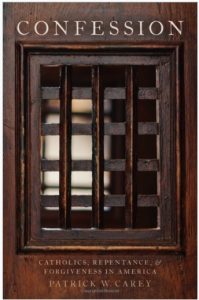 Those Catholic moral theologians who know the history of their field will no doubt have heard of the manualist tradition. Manuals, the guides developed through the years for priests hearing confession, are often examined as representatives of the field of moral theology, or at least, one precursor to that field.

And the manuals are fascinating examples of moral reasoning, particularly in focusing on assessing the culpability of penitents and prescribing suitable penances for the satisfaction of their sins. However, there are always risks of studying historical documents in isolation from a larger context. The documents by themselves provide a limited perspective.

For those unused to reading history, the detail may appear cumbersome at times. While Carey has clearly sorted through an enormous amount of material in organizing his narrative, he didn’t do so with an eye to a particular agenda. Unlike moral theologians who might consider the topic of confession either to disparage or promote, Carey’s history is of a different sort. Though the overall practice of confession in the U.S. has declined, this is not primarily a declension narrative, nor does Carey seek to celebrate the change as liberating consciences and advancing the field of moral theology.

One benefit of reading Carey’s book is the appreciation for the profound presence of the Catholic penitential tradition. Perhaps nothing so distinguishes this generation of American Catholics from previous generations than the lack of penitential culture, and Carey’s book is a stark reminder of this fact. This should be a foremost concern of moral theologians, since the naming of sins and practicing of virtue (penance belongs to the virtue of justice) is so important to the field.

Carey’s history, beginning in the colonial period, shows that penitential practices have always been crucial to Catholic practice and identity in the U.S. While one key penitential practice is the sacrament of penance, others such as fasting and meat abstinence were also included, contributing to a penitential culture. Moreover, Carey’s work indicates that until Vatican II, American Catholics recognized (as well as lived) the penitential values of the tradition, though the embodiment was admittedly sometimes imperfect and limited.

As he notes in his introduction: “The penitential tradition is not a universal remedy for solving social problems, but it is a way of life that can contribute to inner and social peace” (8). Carey does not get much more specific than this in assessing judgment and prescribing changes, except perhaps in his conclusion. Here he suggests value in non-sacramental penitential services to renew the cultural understanding of penance, and he also connects the larger need for reconciliation within the Church and society to the penitential tradition.

Of course, since he is a historian, we should not expect Carey to see it as his duty to prescribe numerous recommendations or detail the best future approaches to the sacrament of confession and penitential culture. Carey takes a big picture (or longue duree, as the French Annales school of historical writing might call it); he recognizes the ebb and flow of practices in the Catholic tradition, as well as the time it can take to see the overall results of movements within Catholicism.

This task of moving forward in response to Carey’s historical contribution rather belongs to moral theologians. In reading Carey’s book, we are left with questions of assessment for the past and diagnosis of the present. What were the pitfalls of past penitential practice, including the use of the sacrament of confession? How might such weaknesses be avoided in renewing penitential culture? Is it possible to increase one’s awareness of sins and contrition for sins without tending toward guilt and scrupulosity? Can we try to be penitential without also appearing hypocritical…and should that concern us? Is the American Catholic Church of the present missing out on anything substantial and worthwhile by lacking a strong penitential culture? Where is the need for reconciliation most profound in our Church, and how might that be assisted by the faithful’s increased sacramental practice of confession? What would change in the field of moral theology if moral theologians took seriously the importance of penance and sought to live that consistently in their own lives?

(A related review of Carey’s book will appear in the Journal of Moral Theology.)