In an invited post for the blog of the exciting new Center for FaithJustice, I once again tried to show how the liberal/conservative binary just doesn’t work even in the political arena from which it came, much less in a Church that started in the ancient Middle-East.

Some might suggest that a rejection of this binary means taking a ‘middle’ or ‘moderate’ position, but this is only the case if one accepts the linear binary in the first place. Indeed, because so many accept the binary, a position that falls out of its deconstruction will actually be quite radical and counter-cultural–indeed, anything but moderate. Such a position will not be the ‘center’ of anything, because to describe a discourse which engages the radically complex and multifaceted issues in play in such spatial terms is a fundamental mistake.  As Dana Dillon helpfully pointed out, it is better to think of the landscape in terms of different clusters of people who tend to answer various questions in similar ways.  But given the number of questions involved, and the different issues at stake in each question, many will find themselves in very different company depending what question is being asked.  This kind of radical complexity resists abstract categories and two-dimensional thinking.

The solution to this, it seems to me, is to work at seeing our interlocutors in the spirit of Christian charity and intellectual solidarity as real people with complex positions. Often, this simply requires meeting and interacting with them in good faith.  Too often those who get to publicly frame the issues of import today miss the particularity of persons and the the positions they hold, and instead define themselves by opposition to their interlocutors in the abstract–something that happens quite naturally when operating in the context of a linear binary like liberal/conservative, commitment/acceptance, etc. Getting beyond this way of thinking is, I believe, the task of all those who wish to have genuine exchange, open to a plurality of voices and commitments as they exist in real people rather than in abstract categories. 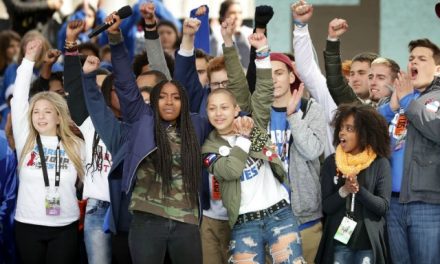 The Children of God: The Catholic Response to Gun Violence