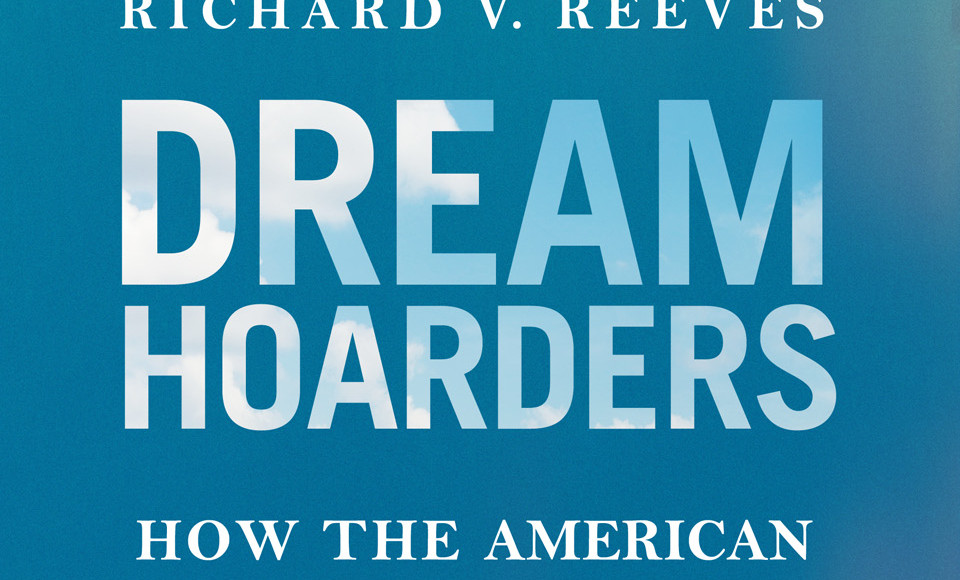 I’m grateful for many gifts my parents have given me, but certainly their stress on the importance of education and school is near the top of the list. Neither of them went to college, but they worked to send me to an outstanding Jesuit high school. From there, I went to Carleton College, a top-ten national liberal arts college, and the rest is history. So in a sense, I’ve lived “the American dream.” And if I did it, isn’t it possible for everyone to do it?

The message of Richard V. Reeves’ powerful new book, The Dream Hoarders, is yes and no. He writes, “It has become a staple of politicians to declare the American dream is dying or dead. But it is not dead. It is alive and well; but it is being hoarded by those of us in the upper-middle class. The question is: will we share it?” The basic premise of the book is that, in a variety of ways, the opportunities that both my parents and I benefitted from are becoming increasingly scarce. Want evidence? The book is filled with examples, but its case can be summed up in one statistic relevant to my own story. While I cannot find the (pre-Internet) acceptance rate for Carleton in my early-1990’s days, I believe it was somewhere around the number for the 1999-2000 academic year: 46.5%. But last year? Carleton accepted only 20.6% of its applicants. Increasingly, even the relatively obscure (and cold!) top-ten schools are surrounded by higher walls that are not simply financial. They are restricted by what Reeves terms “unfair opportunity hoarding.” For those fortunate enough to find themselves availed of the well-prepared opportunities cultivated by today’s upper-middle class, they are virtually protected by a “glass floor” that ensures the continuation of the American dream… for them.

Reeves’ book is a case for why focusing only on the 1% is misguided if we are genuinely concerned with the common good of American society. He suggests the kind of “two-Americas” picture depicted in Robert Putnam’s Our Kids and Charles Murray’s Coming Apart has to be laid at “our” feet – that is, the feet of the upper 20% or so of the income ladder. His book actually begins with a starling example, in which the Obama administration proposed phasing out tax-free college savings plans, only to face fierce (if quiet) resistance from Democratic members of Congress representing affluent districts. 529 savings plans are not of great interest to multimillionaires, but for the two-income professional couple in suburban DC, their commitment to saving a few hundred thousand dollars matters a lot. And so the proposal was discarded. For Reeves, the problem is that our politics pays far too little interest to the group of wealthier people who actually have the numbers to vote (and who participate at very high rates): not the 1%, but the upper-middle class.

The book is an illustration of a deeper contention about increasing inequality in advanced economies that, to my knowledge, was first explicated by Fred Hirsch in the 1970’s. In his classic The Social Limits to Growth, Hirsch suggests that in advanced economies, more and more economic resources are put into “positional goods” – goods and services whose desirability in part depend on their relative merit compared to what is consumed by others. This makes intuitive sense: once everyone has a house, then everyone wants to have a “nice” house – and in part, “nice” is a relative term. Everyone wants “fast” Internet, or “the best” schools for their children. But these qualitative aspects are, at least in part, relative, and they are not simply a matter of base envy. How many schools are “below average”? Well, half of them. Economist Robert Frank suggests these are “smart-for-one, dumb-for-all” problems: it is smart for one member of the society to seek the given advantage, but once everyone starts seeking it, the society can’t produce “more” of it, and so the competition simply eats up everyone’s resources. Hirsch pointed out decades ago that, once a larger group of the society becomes interested in positional goods, a society faces a paradox: it becomes richer, but it feels poorer, because the promise of advancement starts to focus on these zero-sum positional qualities. Thus, the promise of the American dream “for all” becomes impossible, because the contents of the dream keep getting more expensive. What is needed is sharing and collective action, but as Reeves’ 529 example shows, the sharing becomes harder and harder to achieve. (And for the other part of the picture, focused on how we all contribute to the insanity of financialization in the tech economy, the essential reading is Douglas Rushkoff’s Throwing Rocks at the Google Bus.)

The politics of both Left and Right tend to ignore this fundamental disease, focusing instead typically on easily-identifiable scapegoats to explain our problems. There is something in all of these. Race and 1% are both problems. Disability cheats and Chinese trade manipulation do in fact exist. But Reeves’ book does us a great favor by highlighting the key privilege: upper-middle-class-ness, which he particularly identifies with “merit of a certain kind” that happens to be well-rewarded by the current economic structure. Both sides may be dissatisfied with Reeves because, as the above claim makes clear, he’s nuanced. He doesn’t want to suggest that there’s no meritocratic system at work; he simply wants to say that there’s a lot more going on than this, and importantly, the system looks and acts differently than it did a couple generations ago. The upper-middle class have, in short, become more successful. More people can now have a personal driver at their disposal (Uber). More people can aspire to lots of foreign travel or to eating out or to a dizzying array of microbrewed beer. And importantly, they can do more to protect themselves and their kids’ privilege from the possibility that it will be lost.

As with another of our most pressing social problems, the environment, the central problem turns out to be us. And as with the environment, what is needed is some combination of structural and personal change. To some extent, the upper middle class could share its opportunities by being more intentional about its spending habits, both accepting a somewhat less enchanted lifestyle and using some of its wealth to make sure it’s not supporting the poorly-compensated Uber driver. But in another way, the necessity of sharing the privilege has to do with proper investment in the commons. That investment is not simply economic, but involves extending forms of social solidarity beyond the various (often invisible and unacknowledged) barriers that protect the class. And this too is not an easy conversation, since it will inevitably involve confronting challenges labelled as “culture.” It is no accident that economic researchers consistently point out that societies with high degrees of social solidarity often are highly homogeneous; it is no accident that the whitest state in our country gave us our most prominent Socialist. The challenge is then taking seriously cultural issues as part of the conversation about society-wide inequality, without falling into the pretend claim that culture is in fact all that matters for inequality.

In short, this really means recognizing the problem is not just the other. The problem is us. Every one of us. We don’t have a national conversation right now that can handle that. But we do have a theological vision for it.