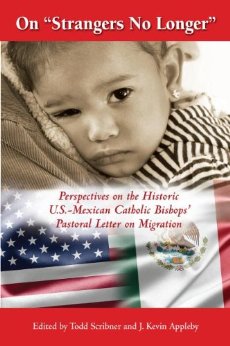 This year marks the tenth anniversary of the publication of the pastoral letter Strangers No Longer by the Catholic bishops of the United States and Mexico on the subject of immigration. In 2001, U.S. President George W. Bush and Mexican President Vicente Fox vowed to pursue a comprehensive overhaul of the U.S. immigration system that at the time garnered widespread support. By the time Strangers No Longer was published in 2003, immigration reform had been taken off the political agenda, both because of the change in political priorities to the war on terror and the war in Iraq, and because of an increasingly suspicious attitude toward foreigners among the American populace. The fact that ten years later the U.S. Congress is arguably closer to accomplishing meaningful immigration reform than at any time in the previous decade, largely along the lines advocated by the bishops, suggests that the letter was farsighted, if not prophetic.

The tenth anniversary of this prophetic document has been commemorated with the publication of On “Strangers No Longer”: Perspectives on the Historic U.S.-Mexican Catholic Bishops’ Pastoral Letter on Migration (New York: Paulist, 2013), edited by Todd Scribner, the education outreach coordinator for the United States Conference of Catholic Bishops’ Department of Migration and Refugee Services, and J. Kevin Appleby, the director of Migration Policy and Public Affairs for the USCCB. The volume brings together many of the leading Catholic voices on immigration from the U.S. and Mexico and successfully demonstrates the continuing relevance of the pastoral letter for immigration policy and pastoral ministry to immigrants.

One of the highlights of the book is Scribner’s essay “Immigration as a ‘Sign of the Times’: From the Nineteenth Century to the Present.” The history of the Catholic Church’s ministering to immigrants has been told many times; arguably it is the history of U.S. Catholicism. Scribner sets all that aside, instead providing the only history of the U.S. bishops’ political advocacy on the immigration issue of which I am aware, from their opposition to the racial quotas implemented in 1921 and 1924, to their support for the 1965 Immigration Act that established the basic framework of today’s immigration system, to their more recent efforts on behalf of immigration reform. In one of my undergraduate classes we read a history of U.S. immigration leading up to our study of Strangers No Longer; Scribner’s essay will easily complement this reading, demonstrating how Catholics have faithfully responded to the changing immigration landscape. The essay also provides several interesting tidbits: for example, John A. Ryan, the well-known advocate of the living wage in the early twentieth century, resisted the views of several leading bishops by advocating for a literacy test for immigrants (a test which became law in 1917), arguing that the influx of unskilled immigrants undermined the wages of American workers.

Besides looking to the past, several of the essays point to the present and the future. Appleby’s essay, “Moving Forward: Next Steps toward Immigration Reform,” describes efforts at immigration reform since the publication of the pastoral letter and the policies advocated by the bishops. The book was published when this year’s efforts at immigration reform were only in germination, but Appleby’s essay helps explain why the U.S. bishops have come out in support of the bill before Congress. Debates about immigration policy tend to revolve around the economic costs and benefits of migration; without ignoring these concerns, Catholic social teaching elevates the discourse by bringing our attention to broader issues of justice. Kristin Heyer (whose Kinship Across Borders: A Christian Ethic of Immigration has set the standard for Catholic reflection on the issue) contributes the essay “Legalization and the Undocumented According to Catholic Social Teaching,” which draws on the principles of the dignity of the human person and the common good to provide a rationale for a path to legal status for the 11 to 12 million undocumented immigrants currently residing in the U.S. and greater opportunities for legal migration. Colleen Cross, a graduate student at the University of Notre Dame who has previously worked on migration policy with the USCCB, writes on “Achieving the DREAM: Catholic Support for Immigrant Youth.” Cross provides a cogent argument for the DREAM Act. When she questions why the U.S. bishops have tended to advocate for it only as part of a more comprehensive reform rather than on its own merits, however, Cross tends to downplay the argument that making a special case for the legalization of children who were illegally brought to the U.S. without their choice implies that those who chose to enter the U.S. illegally should not have access to a legalization process.

Parts of the book are not easy reading. Patricia Zamudio from the Center for Research and Graduate Studies in Social Anthropology in Xalapa, Veracruz, Mexico gives heart-rending descriptions of the conditions faced by guest workers in the United States and Canada and by migrants from Central America attempting to cross through Mexico on their way to the United States. Zamudio shows that despite having visas, temporary workers are often subject to abuse by their employers, including the failure to reimburse fees associated with their visas, wage theft, and poor working conditions. Temporary workers lack adequate means to challenge abusive treatment, and U.S. policy disallows them from seeking different employers, forcing them to choose between putting up with the abuse or returning to their home countries. Central American migrants face even greater dangers crossing through Mexico, from the physical dangers of riding trains across the country to robbery and violence at the hands of corrupt police and drug cartels. In his 1981 encyclical Laborem Exercens, Pope John Paul II describes how in the modern economy, the most vulnerable populations are often treated as objects, as things, to be used for the generation of wealth for the more well-off. Zamudio’s portraits vividly illustrate how this continues to be the case despite the great advances of the twentieth and twenty-first centuries. Likewise, Terry Coonan and Maryann Cusimano Love explain how Catholic social teaching advocates for two exploited or vulnerable populations, the victims of human trafficking and refugees respectively, that often get ignored in discussions of immigration.

Strangers No Longer insists that the issue of immigration requires efforts by both the U.S. and Mexican governments, but subsequent discussions of the issue have given very little attention to conditions in Mexico. Zamudio’s description of migrants crossing Mexico is complemented by the essay by Leticia Calderon Chelius, from the Instituto Mora in Mexico City, who explains the origins of and changes in Mexican immigration policy. She points out that, even though Mexico itself is a large source of out-migration, it has traditionally had a hostile attitude toward foreigners as a result of the long-ruling PRI party’s nationalist ideology. Providing insight into an area unfamiliar even to many immersed in the immigration debate in the U.S., Calderon describes how Mexico’s immigration policy is undergoing fundamental changes, such as a 2008 law decriminalizing undocumented migration and a 2011 law which removed onerous restrictions on foreigners in Mexico and provided a new legal framework for migration. She points out, however, that the latter still does not provide a legal avenue for migrants simply seeking transit through Mexico and does not provide adequate safeguards against abuse by government authorities. In his essay “Migration, Development, and the Right Not to Have to Migrate in the New Era of Globalization,” Donald Kerwin advocates for a “migration and development” model for analyzing immigration, examining the role that migration plays in economic and social development, through remittances, easing labor pressures, and the formation of transnational networks. Strangers No Longer defends a right not to have to migrate, claiming that policies should be put in place allowing people to seek opportunities in their own countries. Kerwin suggests that this either/or dichotomy is too simplistic, as migration itself contributes to the development of more just conditions in the sending country.

Although providing an ethical framework for evaluating immigration policy, Strangers No Longer, as a pastoral document, also discusses the church’s ministry to immigrants. In his essay “Pastoral Perspectives on Migration: Immigrants as New Evangelizers,” Allan Figueroa Deck draws on his experience as the executive director of the USCCB’s Secretariat of Cultural Diversity to provide an overview of the pastoral contexts of immigrants in the U.S. Catholic Church. He claims that in general the church is moving from a model of relatively separate cultural “silos” to a more integrated, yet still diverse, church. He also argues that the church must engage in greater efforts to encourage lay ecclesial leadership among immigrants, especially Hispanics. Although not pastoral in focus, Mark Ensalaco’s “Illegal Immigration, the Bishops, and the Laity” is unique among the essays in the volume by seriously grappling with the ecclesial issue of disagreement among Catholics on immigration. While raising important challenges to the teachings of Strangers No Longer, Ensalaco’s essay is frustrating because in each section he attempts to respond to several pages of objections in just a couple of paragraphs. For example, he raises the serious objection that the document does not provide specific parameters for a prosperous nation’s obligations to accept immigrants and rejects efforts at border control “exerted merely for the purpose of acquiring additional wealth” (no. 36), ignoring real concerns about employment and wages among American workers. Yet, while responding to more obscure objections, Ensalaco leaves this pertinent challenge unaddressed.

Ensalaco also raises the important ecclesiological issue of the bishops’ authority to recommend and lobby for specific immigration policies. In response to the objection that the formulation of such policy is the proper responsibility of the laity, Ensalaco replies that “the bishops had the policy right.” But this is a pragmatic response to a fundamentally theological question, and besides, historically bishops have also been catastrophically wrong on political questions on numerous occasions. Whether or not bishops have the right to recommend specific policies, the more important question is whether their teaching is having a discernible effect on the faithful. As I have argued elsewhere, for the most part the answer is no, at least in part because of the bishops’ policy-centered and intellectual approach to teaching, in contrast to an affective, imagination-shaping approach. Daniel G. Groody, in his essay “A Mission of Reconciliation: Theological Perspectives of Pilgrim People,” provides a glimpse of this latter approach, encouraging theological reflection on the personal experience of migrants and of our common human experience of relationship with one another and with God.

On “Strangers No Longer” is the perfect companion to a pastoral document. Its essays provide the historical context for Strangers No Longer, both in terms of the church’s advocacy for immigration reform and of the political climate. They also provide theological and ethical reflection expanding on the document’s teaching. The book would be an ideal addition to classes covering Catholic social teaching or focusing on immigration. The book will also be useful to those involved in Hispanic ministry or immigration advocacy, but the accessibility and insight of the essays make the book of interest to anyone concerned with the immigration issue.

Finally, A Way “Beyond the Abortion Wars”