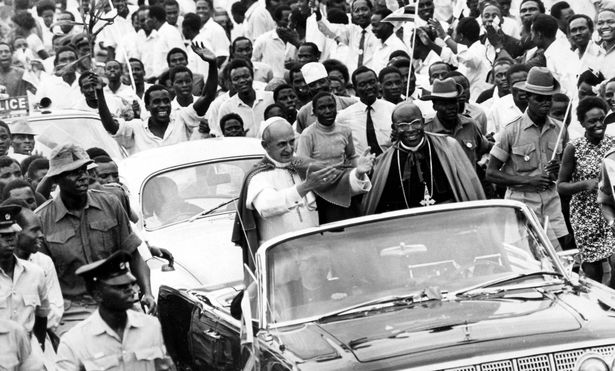 This year marks the fiftieth anniversary of Pope Paul VI’s Populorum Progressio, his landmark encyclical on economic and social development. To commemorate this anniversary, the Journal of Moral Theology has published a themed issue on the encyclical. Co-edited by Mari Rapela Heidt and myself, the issue covers a broad range of contemporary scholarship on the encyclical.

Several of the essays in the issue provide new insights into Populorum Progressio. Mari Rapela Heidt starts off the issue with an introductory essay providing valuable historical context for the encyclical. In particular, she looks at two important intellectual influences on the document: the Dominican economist Louis-Joseph Lebret, the editor of the journal Economie et Humanisme and author of the first draft of the encyclical; and Jacques Maritain, the French philosopher who developed the crucial concept of “integral humanism.”

Clemens Sedmak provides a profound Platonic-Augustinian interpretation of the encyclical. It is widely recognized that Populorum Progressio promotes an integral vision joining economic and social development with personal and spiritual development. Sedmak, however, argues that throughout the document Paul VI uses the language of personal virtue to describe social development, using the microcosm of the soul as a model for the macrocosm of society.

In his contribution, Kevin Ahern situates Populorum Progressio within the conversation over the relationship between evangelization and social action on behalf of justice that took place in the years after the Second Vatican Council, as well as the related conversation over the identity of the Jesuit order. The focus of his essay is on how the mission of the organization Jesuit Refugee Service draws on the integral vision of the encyclical. Barrett Turner tells a similar history in order to show how Pope Francis builds upon the vision of Populorum Progressio. In particular, Turner focuses on four principles of what could be called Catholic social praxis developed in Pope Francis’s speeches and writings: time is greater than space, realities are greater than ideas, unity prevails over conflict, and the whole is greater than the parts. These principles serve as a guide for living out the church’s more well-known social teachings.

Other essays in the issue draw on the spirit of Populorum Progressio while examining topics beyond the scope of the encyclical itself. Both Stan Chu Ilo and Raymond Olusesan Aina look at the social realities of sub-Saharan Africa in light of the encyclical. Ilo looks at how Populorum Progressio and Paul VI’s message to Africa Africae Terrarum inspired the local churches in Africa in their efforts to promote development. He also surveys the current landscape of development in Africa, considering the vision of Populorum Progressio in dialogue with more recent views on development. Aina contrasts Populorum Progressio with the social teachings of Popes John Paul II and Benedict XVI, arguing that the former provides a more radical critique of capitalism in line with the liberationist vision developed by African theologians since the council.

Finally, Marianne Tierney FitzGerald examines the pressing issue of feminicide in the countries of Mexico, Guatemala, and Honduras in light of Populorum Progressio’s integral vision of human development. Feminicide is the killing of women precisely because of their sex, a phenomenon that is exacerbated in the nexus of misogyny, poverty, organized criminal activity, and the violent culture left behind in the wake of political violence. Although Populorum Progressio does not adequately address the ways in which women in particular suffer from poverty and underdevelopment, FitzGerald convincingly argues that the encyclical’s vision of integral development nevertheless provides a helpful lens for addressing the contemporary issue of feminicide.

The church’s social teaching is a living tradition. Even after decades, the documents of the tradition continue to inspire new insights into their meaning and significance. Although written to address the specific problems of their own day, these documents continue to provide guidance as we face issues unimagined by the documents themselves. This special issue of the Journal of Moral Theology hopes to capture something of the enduring vision of Populorum Progressio.

Be Attentive Instead of Liberal or Conservative