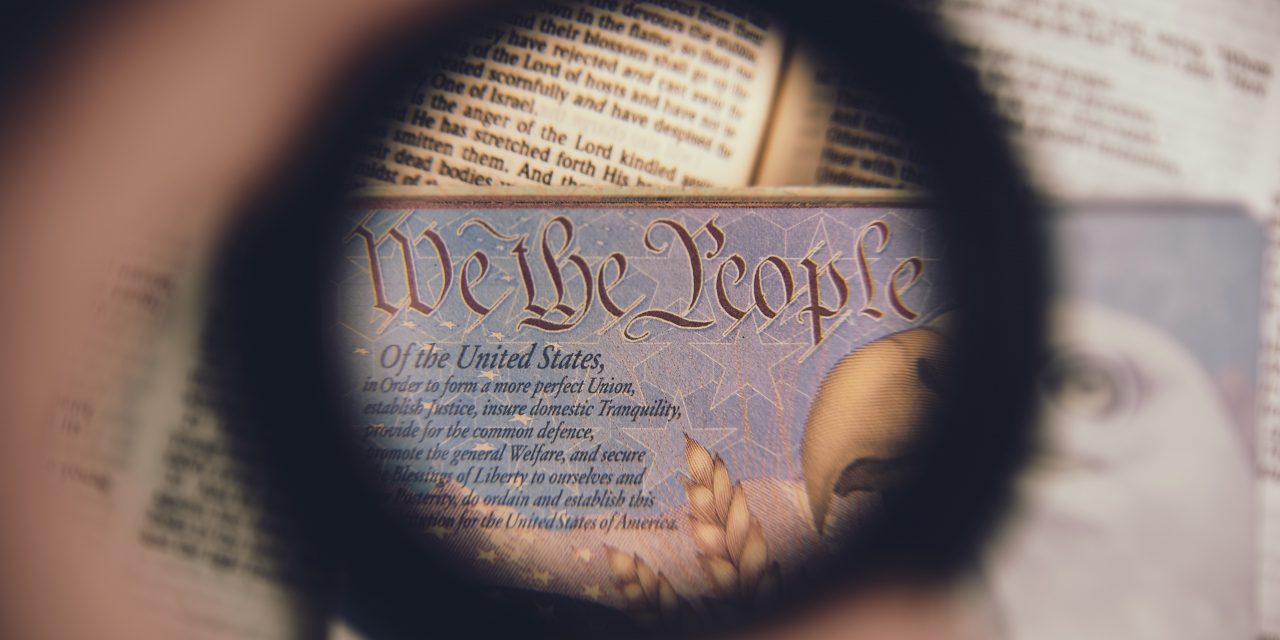 In recent days, much has been made of the president’s horrific suggestion (via Twitter, of course) that four American citizens, elected members of the House of Representatives, should “go back” to where they came from. This remarkable cheapening of our political discourse—which was already at a remarkable low—indicates that questions of identity and exclusion will be at the heart of our national consciousness during the 2020 campaign, especially if the pundits are correct and stoking racial divisions is a central plank of Trump’s reelection strategy.

Regardless of whether this issue becomes the central question of the next 13 months or not, the president’s decision to cast aspersions in this way, and his supporter’s willingness to latch onto it, make it a matter that demands response in the moment. This had me thinking about how Catholics should respond in light of the faith.

First, Catholics need to confront racism when it occurs. There were many recriminations last week as the House of Representatives passed a resolution condemning the president’s racist comments, which stoked a divisive debate challenging even the idea that one might call his offensive statements racist, a debacle that led almost everyone in the president’s party to vote against the assertion “That the House of Representatives—(1) believes that immigrants and their descendants have made American stronger, and that those who take the oath of citizenship are every bit as American as those whose families have lived in the United States for many generations…” because it also “strongly condemns President Donald Trump’s racist comments.”

Catholics ought to resist this kind of hand-wringing and call out racism when they see it. In fact, this duty is incumbent on Catholics for, as the U.S. Bishops remind us, “too often racism comes in the form of the sin of omission, when individuals, communities, and even churches remain silent and fail to act against racial injustice when it is encountered.” Naturally, this requires recognizing racism when it is encountered, something that is often difficult in a cultural context that is colored by its long (and ongoing) history of racial prejudices. To help clarify, the USCCB has tried to answer “What Is Racism?” in its November 2018 pastoral letter against racism, Open Wide Our Hearts:

Racism arises when—either consciously or unconsciously—a person holds that his or her own race or ethnicity is superior, and therefore judges persons of other races or ethnicities as inferior and unworthy of equal regard. When this conviction or attitude leads individuals or groups to exclude, ridicule, mistreat, or unjustly discriminate against persons on the basis of their race or ethnicity, it is sinful. Racist acts are sinful because they violate justice. They reveal a failure to acknowledge the human dignity of the persons offended, to recognize them as the neighbors Christ calls us to love (Mt 22:39).

This is the racism seen in the suggestion that four congresswomen, all of whom are women of color, must go back to where they came from because it manifests the judgment that one’s “own race or ethnicity is superior” and that these women of other races and ethnicities are “inferior and unworthy of equal regard.” Furthermore, the comments required presuming that people of color must not be from the United States, an assumption that assumes a strictly white definition of the country and that therefore serves to “exclude, ridicule, [and] mistreat” on the basis of race and ethnicity.

Catholics must not be afraid to challenge these assaults on human dignity as an act of their faith.

At the same time, it seems to me that Catholics can do more than simply condemn these sorts of racist tropes when they occur. Catholics can also contribute to the very conversation that gives rise to these prejudicial assumptions by diving into the controversial questions about national identity that the president seems intent on stoking. Here, I think, the Church has its own parallel experience to draw upon, although sometimes it would be best if that were to serve as a “negative contrast experience,” as the theologian Edward Schillebeeckx might say.

The Catholic Church has long faced a similar set of questions about who is “Catholic” enough to bear that moniker incontrovertibly. Indeed, today one can regularly find the charge that someone who professes the faith is not “Catholic enough” to be a “real Catholic” because they don’t do x, y, or z. Or, more commonly, because they don’t do x, y, or z vocally enough. In some ways, the recent controversy with Brebeuf Jesuit in Indianapolis was just a tangible (and institutional) manifestation of this persistent debate.

Despite the ways these debates often play out in the news and on social media, the Church has answers to these questions. “By baptism one is incorporated into the Church of Christ and is constituted a person in it with the duties and rights which are proper to Christians in keeping with their condition, insofar as they are in ecclesiastical communion and unless a legitimately issued sanction stands in the way.” (Code of Canon Law, Can. 96).

In other words, the person who is “Catholic” enough to bear that moniker incontrovertibly is the person who has been baptized Catholic and who has not subsequently been excommunicated.

Contrary to popular belief and convention, there is not some laundry list of statements and political decisions one has to sign off on to be Catholic enough. At its core, baptism serves the yes or no box that defines a person’s Catholic identity. Other features and questions are ancillary issues that can legitimately help one determine if he or she is living up to all the promises that that baptism entails, but they alone are not the qualifications that make one Catholic.

Catholics would do well to take this understanding seriously, and to start acting like they believe what the Church says about the bar for Catholic identity. This, of course, is not always easy, especially in a polarized ecclesial environment. Perhaps the Second Vatican Council’s teaching on the “‘hierarchy’ of truths” could be helpful, since this reminds Catholics that the Church’s numerous doctrines “vary in their relation to the fundamental Christian faith,” and so not every culture war issue is as determinative of Catholic identity as it might appear (see Unitas Redintegratio, 11). As Pope Francis warns, “the biggest problem is when the message we preach…seems identified with those secondary aspects [of moral teaching] which, important as they are, do not in and of themselves convey the heart of Christ’s message” (Evangelii Gaudium 34).

If Catholics were to take these ideas more seriously, and to approach the question of who counts as Catholic with more charity, then we might be able to set an example for a nation that seems poised to succumb to the same temptations that have divided the Church: namely, to draw the boundaries of exclusion much more harshly than its stated ideals entail.

Whatever one thinks about the rightful boundaries of the generic term “American” (and I know colleagues from Latin American countries who take umbrage at the notion that this term applies exclusively to people from the United States), there is a clearer demarcation for the official category of “American citizen” and, much like the official category of “Catholic” in the Roman Rite, it has few hurdles.

There are no permissible racial or ethnic barriers to becoming an American citizen. There are no party ideology litmus tests to take on the rights stated, and responsibilities implied, in the First Amendment. The journey is not easy, but for those who take it and have the chance to follow through, they have as much a right to bear the name when they take the oath as any other American citizen. The results of citizenship may not be accompanied by an ontological change the way the Catholic Church believes baptism does, but the process yields a no less definitive outcome. No one who bears the name needs to “go back” because they have a different skin color, a different accent, or even a different political opinion. They belong.

Ultimately, it seems, Catholics and Americans (to say nothing of American Catholics) have reason to learn the same lesson. If they are to be true to their ideals and explicit standards, they must be quicker to assume inclusion than to pronounce exclusion in cases of identity. Once we make that decision, we can then begin the much more complicated, but much more worthwhile, task of figuring out how we make a community with so much diversity.

As a Catholic ecclesiologist might insist, there must be unity in diversity.

As an American historian would remind, out of many, one.