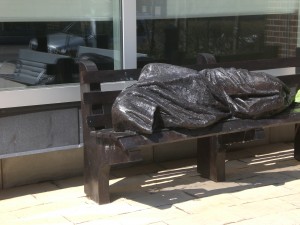 This week, Congress considers legislation that would eliminate the National Housing Trust Fund and significantly reduce housing grants to state and local governments over the next 2 years. The USCCB has sent out an Action Alert asking Catholics to call upon Congress to reject these cuts and continue funding these crucial programs that support so many people and families in desperate need of housing assistance. Stephen Schneck has argued eloquently that housing is a human right. Moreover, participation in this political action is a both a Christian duty and an opportunity to grow in crucial moral virtues.

Catholic social teaching is clear: Christians have a duty to participate in the realization of the common good. The standard definition of the common good, drawn from Gaudium et Spes #26, is “the sum total of social conditions which allow people, either as groups or as individuals, to reach their fulfillment more fully and more easily.” Can you imagine a person or a family reaching their fulfillment without a home and the safety, security, and rootedness it provides? Can you imagine a community flourishing with many of its members suffering from homelessness and home insecurity? There is no commitment to human flourishing without a commitment to affordable housing.

The Catholic conception of the common good is not “the greatest good for the greatest number,” though even that model would have us do more for the homeless than we do. On a Catholic view,  the good of all is tied up with the good of each, and the best way to measure the attainment of the common good is the situation of the most vulnerable. Simply because of their economic status, those who are homeless are in this population. But many of these people are vulnerable for additional reasons: they are families with small children, immigrants, elderly, those with mental illness, cognitive impairment or physical disabilities. It is scandalous for Christians to turn away from those Christ called the least of his brothers and sisters.

Pope St. John Paul II wrote eloquently of solidarity both as an inescapable “bond of interdependence” uniting the human family at every level and as a moral virtue that works to help us both recognize this bond and act upon it. He insisted that solidarity is not a “feeling of vague compassion or shallow distress at the misfortunes of so many people, both near and far. On the contrary, it is a firm and persevering determination to commit oneself to the common good. That is to say to the good of all and of each individual, because we are all really responsible for all” (#38). Pope Francis has urged Christians to interrupt the globalization of indifference.  We must not be indifferent to the housing crisis on the streets of our own cities. We must not give in to the temptation to turn away from these brothers and sisters in need.

Looking for a simple act (or three) to step out of your indifference, do your Christian duty, and grow in the virtue of solidarity? Here are a few options. First, join the USCCB campaign to defeat this legislation here. You fill in the blanks, and that site will help you send an email to your US Representative. Alternatively (or in addition), compose your own email, snail mail, tweet, or even phone call to your congressional representative. Finally, write or call Senator Susan Collins (R-Maine, and a Catholic), Chair of the Subcommittee for Transportation, Housing and Urban Development and urge her to use her leadership role to withdraw this legislation. Mere moments can help enhance the good of our vulnerable brothers and sisters. How can we not take the time?