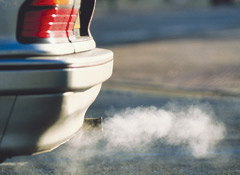 Over at dotcommonweal the other day, I commented on a study that showed how little people are willing to pay to get a cleaner energy supply. Even the majority who express concern about global warming are very reluctant to put their money where their mouth is and make a sacrifice to change our direction.

This inability to sacrifice even a little of our way of life in order to address the monumental problem has been brought out more personally for me in the last few months. For over a decade, I’ve lived a car-dependent life. I lived in places where there weren’t alternatives to driving that were realistic, especially for the daily task of getting to and from work. I did what I could – I picked residences that at least allowed some freedom. In Cold Spring, Minnesota, I lived around the corner from the main street and a couple blocks from the parish. In Frederick, Maryland, I took advantage a walkable library, fitness center, and church. But I still had (fairly long) drives to work, and more importantly, I lived in places where drives – whether long or short – weren’t hassle. There was always parking, and genuine traffic delays were rare.

This summer, I moved to Washington, DC, with great anticipation: I could finally break the dependence. Besides a city neighborhood scale that meant much more was walkable, I had the second-busiest transit system in the country at my disposal – and I moved determined to position myself to use it, especially for work, with a direct bus and rail connection basically at my doorstep.

Pretty quickly, the edge has come off my romantic visions. The buses were unpredictable at best, and often excruciatingly slow, making a 3.5 mile journey take over an hour sometimes. One afternoon, I was physically threatened by an unstable man (handled well, I should add, by the driver). The rail is usually better, at least during rush hours, but often enough, there are maddeningly pointless delays at other times. Notorious “single-tracking” should be pretty easy to manage on a dedicated set of tracks, yet not infrequently, two or three trains get stacked up in either direction, even though trains aren’t running frequently. I think my worst story was this past Tuesday evening, around 9pm, at the busy Dupont Circle station: I needed to go two stops to get home after a lecture, and I (and many others) stood on the platform for over 50 minutes, wondering where the train was that was (according to the sign) a stop away. The station manager could not give us any information. Eventually, I bailed (yes, I was charged for the trip) and dashed a couple blocks hoping to catch a bus – which eventually came and was itself overstuffed with others forced to get around the delay. Later, it was reported that a track switch had failed, and then when the train got stuck, two (unauthorized) passengers eventually decided to exit a train in the tunnel, thus prompting a series of safety checks that further exacerbated the delay. Did I mention the cooling system at Dupont has been broken all summer? The next morning, I had to drive my car for the first time in a couple weeks… and it felt so, so good.

I’ve taken to naming my previous life with the term “fossil fuel privilege.” Because that’s what it is: a liberation from reliance on the commons, from interaction with the poor, from all the things that come with relying on a community-wide transportation system. But it’s a liberation that awfully hard to see when (as is the case in most of the United States) the daily driving dependence is functionally seen as normal. I don’t mean here to get into a debate about the quality of Metro – which can be a delight sometimes – or place blame – it seems to me that everyone contributes to the problems at transit in different ways – customers, for example, seem unable to follow Metro’s admirable rules about not eating or drinking, with the result that cars are dirty and littered all too often, and I’m sure Metro workers would prefer to be fixing track switches than cleaning up after passengers. What fossil fuel privilege does is liberate me from all of that. I can do my own thing, set my own schedule, manage my own vehicle, and (preferably) park as close to the door as possible. But the privilege goes deeper than that: transit means thinking about the commons and (because it is fixed) living in the commons. For fossil fuel privilege is also a matter of being able to live in communities that are reasonably “inaccessible,” especially to the poor. Again, don’t get me wrong: I’m suddenly in a superZip here in DC, but it’s a superZip with beggars and a homeless shelter coming and… well, it’s just a matter of being required to live with a whole lot of other people. Of course, what I’ve had to wrestle with is the basic fact that I want my privilege back.

There are a number of different ways – not just shared transit – that might enable us to change our energy consumption on transportation sufficiently to meet the stringent requirements of the planet. (Self-driving cars are not among them, but that is for another post…) Curtailing unnecessary long-distance travel, living closer to the workplace, carpooling – these can all make a dent. But the 80% cut needed is hard to imagine apart from collective systems for routine transportation, which are a big part of why Europeans have about half the carbon footprints of Americans. As long as we say to ourselves, “the present is normal, we only need to make tiny changes,” we are suffering from the blindness characteristic of privilege.

Claims about privilege are not easy ones to swallow. First, it should be clear this isn’t simply a matter of people needing to feel guilty: as I pointed out, for over a decade, I didn’t really have a ton of options, and I tried to do what I could incrementally… but I wasn’t fanatical about it. Systems of privilege are just that – systems – and addressing them requires attention not simply to individual behaviors, but to structures. Yet structural change does require individuals to change. And at the very least, we cannot imagine a planet where everyone aspires to live the fossil fuel lifestyle to which we are accustomed.

But second, claims about privilege are really important for Christians, because they are the places where the renunciatory commands of the Gospel can really hit home. I didn’t understand what Jesus meant when he said, “Those who try to save their life will lose it, but…” But my dissertation was about how those sayings pointed us to structures in our society – structures especially of money, sex, and power – which the Gospels allows us to renounce in order for us to be agents of the reconciliation God has promised in Christ. Right now, such a renunciation is just annoying me – which is to say, I’ve lost some of the power to order my life to my own ends. But if we don’t keep at it, we just reproduce the existing structures… and the conflicts built into those structures.

An Idea Whose Time Came a Long, Long Time Ago…