Is there a war on women?   And as much as it pains me to say, it is very difficult to conclude that women and girls are not under attack in the United States of America in 2013. Upon graduation, 1 in 4 women will have been a victim of sexual assault. And if by chance they do report it AND their assailants are convicted….the mainstream media will focus on the “promising futures” of her attackers that are now ruined. And feminism is passé? What about the promising future of the young woman whose life is forever changed by being the victim not only of sexual assault but continually victimized by the pervasive images of her attack on social media?

Justice for rape victims is a fickle thing. Beginning with the maddening reality that only 5% of sexual assault victims report the attack- Why?

First, because rape that does not come with significant and appealing physical evidence is discounted as if it is not real and the implication is that it won’t be tried. My uncle is a retired NYPD special victims unit detective. When I was a young teenager, I remember him sitting me down and emphasizing if I ever found myself in a situation where I was sexually assaulted that it was imperative that I fight back. If there was a weapon, like a gun, this changed things…but in general, I was instructed you must have physical evidence of “fighting back,” if there was to be serious hope of conviction. He admitted that this is wrong, but as I went off to college, he wanted me to understand the ways the law was applied. Clearly, every element of our society is permeated with this ridiculous notion that if it isn’t violent, it isn’t rape. (Behind this assumption of course is the reality that the testimony of women as victims will not be considered credible enough to warrant trial and conviction, once again, we’re not really fully equal).

Second, because after they are victimized by their assailant, they continue to be shamed, criticized and traumatized when they do come forward.  The Oscar-nominated documentary Invisible War powerfully documented the silencing of rape victims within the US Military. Last year, a series of exposés  in National Catholic Reporter highlighted similar treatment of rape and assault victims at the University of Notre Dame. In her articles for NCR and NY Magazine, Melinda Hennenberger places a horrific irony in front of us – there is greater interest in a fake dead girlfriend than actual dead rape victims (and forget about interest in living rape victims…..).

That the “hook up culture” is dangerous and destructive is clear and investigated by theologians like Donna Freitas. It is not simply a matter of trivializing sex, however, as Freitas and others note in their work, this cultural attitude leads to violence. And the threat does not begin when girls leave for college, rape and sexual assault is endemic in our high schools as well, as the Steubenville case hopefully will force us to face.

In a case that every news outlet claims is “captivating a nation,” two high school football players were found guilty yesterday for raping a 16 year old girl who was passed out. Without rehashing the entire case – I find it personally sickening to read and watch coverage of this case. First, the actual events are horrifying. But, what has captured everyone’s attention isn’t the rape it is the use of social media (an important aspect, but still the use of social media is only relevant with respect to the HUMAN PERSON who has been victimized). Now that these boys have been found guilty, I am terrified that WE HAVE MISSED THE POINT.

Why? Just look at CNN’s coverage of the verdict: 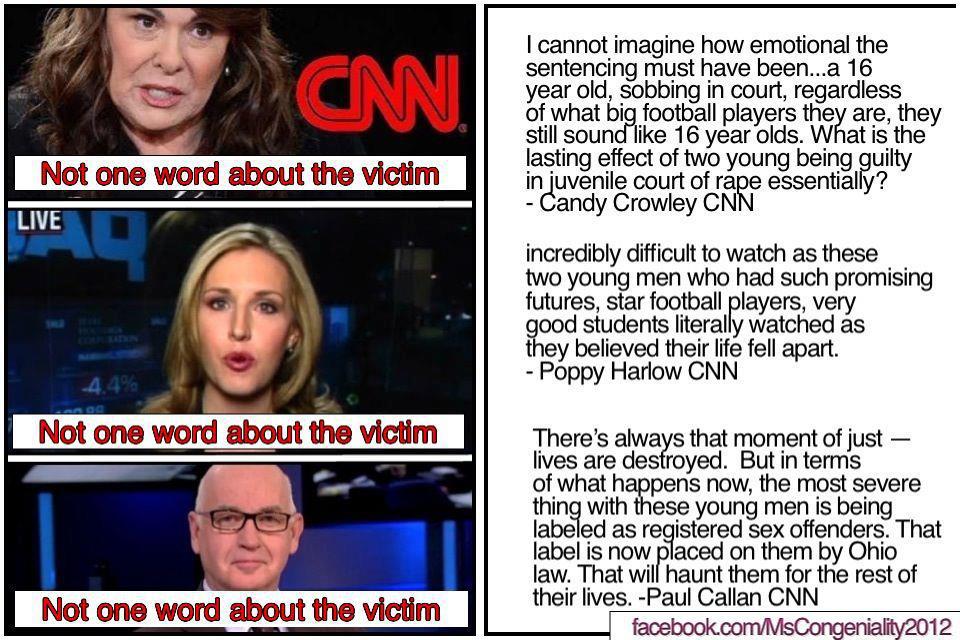 CNN appears to have missed the point. They are rapists. Our culture surrounding sex is violent, exploitative and destructive to the dignity of women. Rape is Rape.

Part of the problem is found in a recent online article entitled, “Nice Guys Commit Rape Too,” which details the context of a “nice guy” who apparently doesn’t realize he has in fact committed rape. In the story, which of course did involve drugs and alcohol, the two people passed out in bed and she woke up to his penetrating her. How is it that a nice guy is unclear that sex with an asleep or passed out woman is RAPE?

This problem is emphasized in some of the testimony from Steubinville:

Evan Westlake, 18, a Steubenville football and baseball player, told the judge on Friday that he saw Richmond digitally penetrate the girl in the basement.

When asked by prosecutors why he didn’t stop the incident, he said, “It wasn’t violent. I didn’t  know exactly what rape was. I thought it was forcing yourself on someone.”

…
Anthony Craig, 18, also testified Friday that he saw Richmond digitally penetrate the girl in    the basement.

Craig also admitted taking a nude cell phone picture of the girl while she was in the   basement and showing it to friends.

Our media, legal, political, and sports culture all seem to miss one basic fact. My human dignity means that the need for my expressed consent is NEVER EVER removed. Not by alcohol, not by marriage vows, not by how I dress, not by what music I listen to, not by poverty, not by anything. Every single instance of sexual interaction requires my free consent and I always have the right to refuse it. Nothing a woman does, no matter how imprudent, can ever be interpreted as “asking” for sexual assault. Rape can never be explained away.  At the Steubinville trial, the defense tried to blame the victim. However, as the media has noted, social media made that attempt futile. It was visible that she was not a willing participant.

Unfortunately, as the offensive CNN response indicates – the media focus on this case is likely to miss the point. Social media may make it easier to get a conviction (thus, boys beware – by documenting your crimes you may be forced to actually be held accountable!) but it also creates the conditions whereby a victim gets perennially revictimized and traumatized by the pervasiveness of their vulnerability and injury.

The full dignity of women DEMANDS that we educate our girls to be strong enough to demand an end to this violence (and there do not have to be bruises for it to be a violent act. The girl in Steubenville was a victim of violence!). And we need to have a real education of boys as to the comprehensive reality of sexual assault. As a Catholic feminist, I find it alarming that the “we spoke to the boys,” attitude that belittles sexual assault and perpetuates the silencing of victims is alive and well in Catholic schools (if you haven’t read Hennenberger’s Notre Dame articles – you should) as well as high schools, colleges and universities at large. And I fear, this marginalization will continue until a major NCAA school loses Title IX status (which is what should happen given the trivialization of sexual assault and the silencing of victims.)

As a moral theologian, the structural violence evident here is one that I find personally overwhelming. “rape is rape” sounds trite. It seems so obvious that one doesn’t know how else to say it. The Didache speaks of the way of death and John Paul II the culture of death, and for me, one clear example of this is the pervasive acceptance of sexual violence against women and girls. When we participate in and allow the persistence of the culture of rape exposed by this case through our complicity (and the complicity of so many others beginning that night but continuing through the trial is striking) we are facilitating the culture of death, we are following the way of death. We are not, to quote the new pope, living as disciples of the Lord. No one can coherently claim to be prolife without fighting sexual violence as a priority.

Every woman and girl is fully created in the image and likeness of God. This means we lament the effects this incident had on the “promising future” of this girl, not her attackers. I pray for their conversion and as Pope Francis reminded us this weekend, we all throw ourselves on the mercy of God. But I do not lament the adverse affects on their “promising futures,” I lament the marginalization of the victims of sexual violence.