Can we really not afford to help the poor?

The fiasco that is political negotiations on the  debt ceiling boiled over today with both President Obama and Speaker Boehner holding press conferences. The mantra of Boehner, House Republicans generally and the Tea Party more specifically has been “we have a spending problem” and “we cannot afford _________ (insert your favorite social program here).”

In his press conference, even President Obama seems to accept the “we can’t afford” the level of social support we have now premise:

We have agreed to a series of spending cuts that will make the government leaner, meaner, more effective, more efficient, and give taxpayers a greater bang for their buck. That includes defense spending. That includes health spending. It includes some programs that I like very much, and we — be nice to have, but that we can’t afford right now.

Now, is the vote to raise the debt ceiling important? yes, it must happen. And, should we seek to eradicate government waste? OF COURSE.  Is a more effective and efficient government for the common good? YES; however, the question of the common good appears to be an afterthought to what House Republicans have determined “we can afford” (or at least any definition of the common good is redefined based upon that).  For the moment, I simply want to raise the question: Is it really about what we can afford? Or about what we are CHOOSING to make a priority?

Voters deserve to be treated like adults, not children, and this means that politicians shouldn’t say “we can’t” when they really just mean “we don’t want to.” If some members of the House and Senate don’t think the federal government should take care of those who aren’t fully able to take care of themselves—if, say, they believe it’s up to the states or private charity to do this—then let them say so openly instead of presenting their policy preference as a matter of fiscal necessity. Small-government conservatives are now using the national debt as an excuse to cut programs they’ve long wanted to cut, even when the government was running a surplus. When the economy is in good shape, the programs are said to be unnecessary and wasteful: let the thriving private sector take care of whatever problems the public programs were designed to address. And when the economy declines, the same people tell us we can no longer afford such a generous safety net. Whatever ails us, the cure is smaller government.

The biggest economic problems the United States now faces are unemployment, income inequality, and the fact that much of the financial sector still operates like a casino. If the country could solve these problems, the gap between government outlays and government spending would immediately shrink, if not disappear. By instead focusing attention on the country’s debt, politicians are getting it backwards. Contrary to the claim of many leading Republicans on Capitol Hill, there is no reason to think that immediate cuts to government spending will help the economy—or that spending cuts can’t wait until the economy improves. Behind the confusion on these points are four myths about national debt that have somehow become conventional wisdom in Washington and in most of the media.

Instead of trying to cut out segments of the article, I highly recommend a trip to Commonweal.org.

For Christians, the fundamental question is how are we treating the poor and oppressed among us? Thus, Clark concludes:

How do we help the poor and oppressed in a twenty-first-century economy? Policies that promoted social justice in the eighteenth century might not promote it today. Before modern advances in medical knowledge, there was not much need for universal health care. Before people started to live longer lives, there was not much need for social security. Before the development of modern technology, there was little need for government-supported education. Before we allow representatives of the Tea Party to slash government spending on programs for the elderly, the sick, and the unemployed—modern programs that were designed to meet modern needs that neither Adam Smith nor our Founding Fathers could have anticipated—we should demand solid evidence that the richest country in the history of the world really cannot afford to take care of its most vulnerable citizens. We should make sure we are not reducing our commitment to the least of our brethren so that the richest 5 percent can grab an even larger share of the country’s wealth. The urgent danger facing us now is not that America is about to drown in debt, but that discredited, ahistorical economic theories will scare us into abandoning our most important values.

Good News and the News Cycle: The Sermon that Shook the Internet 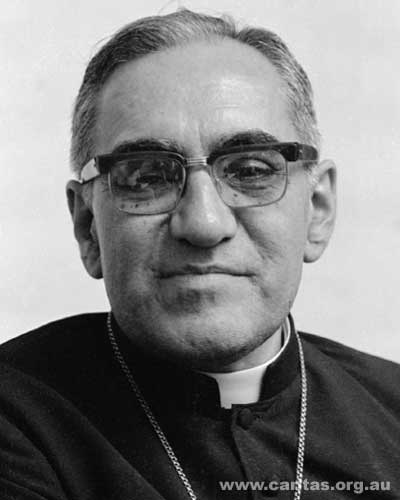 Archbishop Romero is now a martyr.