The following is a guest post from Paul Gondreau, Professor of Theology at Providence College.  Paul is serving as the Faculty Resident Director at PC/CEA’s Center for Theology and Religious Studies in Rome this semester, joined by his wife Christiana and their 5 kids.  After Easter Mass in St. Peter’s Square yesterday, Pope Francis hugged their son Dominic. You can see video of the encounter at this link and can read a brief news piece here, and you can see CNN’s interview of Christiana Gondreau and Dominic here.  We are grateful that Dr. Gondreau agreed to share his reflections on that event with us. “Small acts with great love,” Mother Teresa was fond of saying. Yesterday, Pope Francis bestowed an extraordinary Easter blessing upon my family when he performed such an act in embracing my son, Dominic, who has cerebral palsy. The embrace occurred when the Pope spied my son while touring the Square, packed with a quarter million pilgrims, in the “pope mobile” after Mass. This tender moment, an encounter of a modern Francis with a modern Dominic (as most know, tradition holds that St. Francis and St. Dominic enjoyed an historic encounter), moved not only my family (we were all moved to tears), not only those in the immediate vicinity (many of whom were also brought to tears by it), not only by thousands who were watching on the big screens in the Square, but by the entire world. Images of this embrace quickly went viral, and by Easter Sunday afternoon it was the lead picture on the Drudge Report, with the caption, “Change Hatred into Love” (a paraphrase of Pope Francis’ Urbi et Orbi message that followed shortly thereafter), where it remains even as I write this. Fox News, NBC Nightly News, ABC Nightly News, and CNN all showed clips of it. Lead pictures of it were found in Le Figaro, the New York Post, The Wall Street Journal, the Philadelphia Inquirer, inter alia.

It is often difficult to try to express to people who do not have special needs children what kind of untold sacrifices are demanded of us each and every day. And as for Dominic, he has already shared in Christ’s Cross more than I have throughout my entire life multiplied a thousand times over. What is the purpose in all this, I ask? Furthermore, I often tend to see my relationship with Dominic in a one-sided manner. Yes, he suffers more than me, but it’s constantly ME who must help HIM. Which is how our culture often looks upon the disabled: as weak, needy individuals who depend so much upon others, and who contribute little, if anything, to those around them.

Pope Francis’ embrace of my son yesterday turns this logic completely on its head and, in its own small yet powerful way, shows once again how the wisdom of the Cross confounds human wisdom. Why is the whole world so moved by images of this embrace? A woman in the Square, moved to tears by the embrace, perhaps answered it best when she to my wife afterward, “You know, your son is here to show people how to love.” To show people how to love. This remark hit my wife as a gentle heaven-sent confirmation of what she has long suspected: that Dominic’s special vocation in the world is to move people to love, to show people how to love. We human beings are made to love, and we depend upon examples to show us how to do this.

This lesson, to repeat, confounds the wisdom of the world. Heck, it confounds me when I, as his parent, so often fail to see my son’s condition for what it is. The lesson my disabled son gives stands as a powerful testament to the dignity and infinite value of every human person, especially of those the world deems the weakest and most “useless.” Through their sharing in the “folly” of the  Cross, the disabled are, in truth, the most powerful and the most productive among us.

One more thing. Pope Francis’ embrace of my son, Dominic, indicates that we should not interpret the new Pontiff’s expressed devotion to the poor, already a cornerstone of his pontificate, in facile, purely material (let alone political) categories. His Easter embrace of my son stands out as a compelling witness to the kind of “poverty” that he urges us to adopt, the poverty that he pointed to in the opening line of his Urbi et Orbi message yesterday: “I would like [the message of Christ’s resurrection] to go out to every house and every family, especially where the suffering is greatest…” Parents of disabled children, stand up and find solace and encouragement in these simple yet profound words. 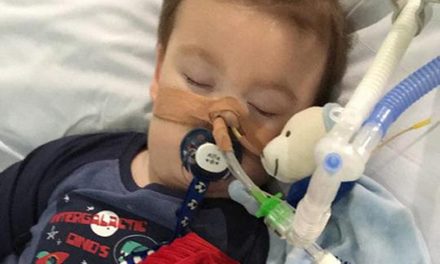