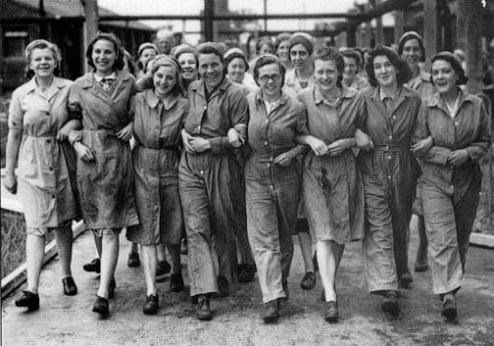 “Oh yeah, that will work out great,” I thought to myself. “I’ll stay home from work and catch up on laundry. Oh, wait…”

As it turns out, today’s A Day Without a Woman is not supposed to be my day to catch up on laundry at home. The organizers call this a “one day demonstration of economic solidarity” and call on supporters to do what they can of the following three agenda items:

Critics like Maureen Shaw argue that the protest favors privileged women who can afford to take a day off. (Count me in this group, folks!) She also describes why it is hard for women to “take off” from unpaid labor like parenting:

Even the idea of refusing to participate in unpaid labor is unfeasible for many women, especially those without limitless resources. Unpaid labor is, still, labor. Those of us who shoulder caregiving responsibilities cannot just up and leave children, elderly family members, and others without a support network in place willing to pick up our slack. As a mother whose husband works long hours away from home, how am I supposed to stop taking care of my very young children? My closest family members live hours away, and my friends have children of their own to care for.

Believe me, I’d love nothing more than to abdicate my parenting responsibilities in solidarity with the strike. But in order for me to strike at home, I would have to hire help—which is itself antithetical to the premise of “A Day Without A Woman,” given that my babysitters are female. (And I suspect this holds true for many other families). At the very least, I suppose, I could order dinner that night instead of cooking and refuse to clean up after the kids. But that would only result in fewer dollars in my pocket and heart palpitations from the mess.

This is true of my experience as well. Even while the official website tells male allies to “lean in” and adopt greater child care responsibilities, which is a great idea, not every working mother has a male ally who can help her out at home today. Even so, it does help me feel supported when I know that the organizers of the protest have thought through these issues. They write:

Care work is work, whether paid or unpaid, and the burden of care falls disproportionately on the shoulders of women, particularly women of color. Whether it’s child care, elder care, self-care, emotional care, caregiving plays a central role in keeping America’s economy going. Women make up the bulk of minimum wage earners and caregivers are often at the bottom of this and are most often women of color.  We must repair and replace the systemic disparities that permeate caregiving at every level of society.  We stand for the rights, dignity, and fair treatment of all unpaid and paid caregivers.

In an effort to build on the success of the Women’s March on Washington, which I blogged about here, the organizers of A Day Without a Woman have chosen this form of protest to highlight the gender gap in pay, gender discrimination in the workplace, and the lack of family friendly policies. Today’s protest serves “to highlight the economic power and significance that women have in the US and global economies, while calling attention to the economic injustices women and gender nonconforming people continue to face.” They also advocate for paid family leave, affordable childcare, policies to give workers time off when sick, affordable healthcare, fair pay, vacation time, and healthy work environments. These are real and pressing issues that impact women of diverse backgrounds and socio-economic statuses. And they have support in the documents of the Catholic tradition, especially as church teaching affirms the “subjective” and “social” dimensions of work (although, it is regrettable that the documents fail to use inclusive language, which can give the impression that “work is for man,” meaning men).

I admire the work that is being done to continue to keep these issues on the national agenda. It is important to continue to raise awareness of these issues and to build strong coalitions among groups who can continue to work on changing policies on various levels. It reminds me of a powerful quote by Dorothy Q. Thomas:

The power of human rights is the idea that all people are born equal in dignity and rights. But it’s an idea that doesn’t have an enormous army behind it. It’s an idea whose effectiveness depends on people themselves believing in it, taking it up, and being willing to defend it.

We have to be willing to take a stand on these issues when we can. Not everyone will be able to wear red today. Some women will have to go to work. I will probably do that laundry, unless you want to come over and do it for me. But in the big scheme of things, a day of protest like today can have a positive impact if it empowers women to stand up for their human dignity, nurtures solidarity among participants, and reminds everyone how valuable women really are.

Which brings me to my final thought experiment. If today is a day to honor women’s contributions in the workplace, what can we say about women in the Catholic Church? The cynic in me says that for the Curia, #ADayWithoutaWoman is just another ordinary day. An NCR article from 2015 says that 1/5 of the Vatican workforce is female. In the article, this is described as “a fresh wind blowing,” but unless my math is wrong, 1/5 is less than half of half, so I don’t really see that as something to celebrate. In our parishes and Catholic organizations in the US, we know that women are contributing to the church’s mission in many different kinds of roles, including lay ministry, teaching, administration, social services, and other positions. But is the church a just employer? Does the church pay a living wage, offer family leave benefits, and opportunities for professional development? How many parish offices will close today in honor of #ADayWithoutaWoman?

What would the church look like without women? Well, it would look like a bunch of men. Which is not what our church is about, really. So let’s also take this opportunity to celebrate the women who felt called to serve the church and who work hard in their jobs –often underpaid and underappreciated– and perhaps even take the time today to thank them. (And if you really mean it, join them in organizing for better benefits!)