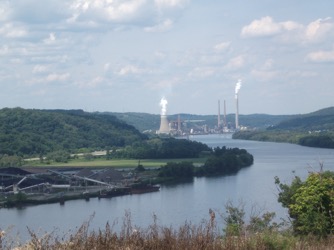 On Friday, October 21, 2016, the Theology Department at Saint Vincent College hosted the conference “Laudato Si’ and Northern Appalachia.”  While every experience of a conference is a bit individualistic, there were three themes that emerged for me over the course of the day.

Too often, environmentalism is thought of as an issue among several other issues. In Appalachia though, it is difficult to view it this way.  The damage done to the environment by mining and timber was not something apart from people but went hand in hand with financial exploitation, violations of human dignity, and damaging of communities.  It was part of what I thought of as an “integral suffering”.

Joel Shuman discussed this interrelated suffering in his brief overview of the West Virginia Coal Wars.  Mining companies went well beyond financial exploitation of the miners to spiritual exploitation in order to get them to cooperate with the work.  Shuman notes there were “company” churches in the “company” towns that preached the promises of heaven if people quietly endured the suffering (i.e., that which was inflicted by the mining companies) here on this earth.

In his talk “Discerning a Catholic Environmental Ethos,” Dr. Tim Kelly spoke of several events that indicated the connections between people and the environment.  The most striking of these was the Donora Smog Disaster.  On October 27, 1948, the smog from the surrounding mills—including a zinc mine—was trapped by a hot air inversion and built up over three days.  People assumed that it was run-of-the-mill fog, but, on that Friday evening, people starting dying at the local football game.  Three days later, around 20 people had died.

In response to the connection between abuse of the environment and human suffering, the importance of an “integral ecology” came up repeatedly.

It emerged at the beginning of the day with the plenary talk from Sr. Anne Clifford. She noted that the connection between poverty and environmental degradation could clearly be seen in Appalachia.  Thus, the solution was not just to solve poverty or fix environmental problems.  The challenge was to do both, do develop a truly “integral ecology.” She ended with a call to Catholic colleges and universities to develop centers to bring several academic disciplines together to do just that.

In in her “Schoharie County and the Constitution Pipeline,” Dr. Nancy Rourke discussed the connection between environmentalism and spirituality.  She noted how her grandfather and his friends, all farmers or former farmers, fought the installment of a pipeline across their properties.  Through this work, they developed a sense of purpose, a sense that they were called by God to protect the land.  In short, integral ecology entails politics and economics bust also spirituality.

3) The Need for a Multifaceted Approach

As the environment is connected to people and communities, damage to one part damages all the parts, and care for one part entails caring for all.  Thus, any solution must come not from just the political realm or the scientific realm or the religious realm but all of these (and more).

In “Sustainable Communities and Eucharistic Communities,” Lucas Briola talked how a narrow vision of the world leads to people blaming the 2016 floods in West Virginia on the natural terrain, all the while neglecting the fact that many of the mountains had been strip mined and so robbed of their ability to absorb rain water and prevent floods.  Instead, Briola spoke of the need for a more expansive vision that united vital, social, cultural, personal, and religious values for the redemptive recovery of environment.  He gave the example of how the Priest Field Pastoral Center in Kearneysville, WV, had highlighted the value of the environment simply by the way they had constructed the worship space.  (See the picture below.) 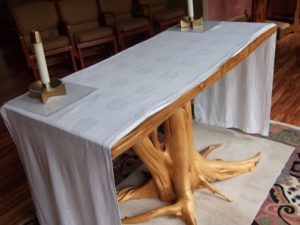 Perhaps, nowhere was the need for a multifaceted solution more pronounced than with Jessica Wroblowski’s discussion of  “The Telling Takes us Home”.  This “Peopleʼs Pastoral from the Catholic Committee of Appalachia” quotes Pope Francis saying that,

A strategy for real change calls for rethinking processes in their entirety, for it is not enough to includes few superficial ecological considerations while failing to question the logic which underlies present-day culture.

The problem is so complex that a new and comprehensive vision is needed, one that the relies on all the disciplines.  Thus, the pastoral documents calls for

What one sees in this solution is not environmentalism as one cause among many.  Instead, what is needed is a rethinking of our way of living that includes the environment but also work, life, and relationships, and that the interconnection between these means they all have to be addressed together.

This is perhaps a daunting challenge, but, somehow, at the conference, the challenge did not feel so insurmountable.  I felt like everyone was thinking and working together to do something to make it better.  Perhaps this is the real fruit of a conference:  not just the ideas but the gathering of people together to strengthen the bonds of caring.