Women in the Church

Over at America magazine, Sidney Callahan has a great article, “Feminism at Fifty: A Catholic Woman Looks Back at ‘The Feminine Mystique.'” She describes how popular ideas about women in the 1950s, “served as a more subtle form of ensuring women’s subordination to male privilege.” Then she poses a question:

Was it really that bad? the young may ask. Yes, it was. In the 1950s my father, who told me I was intelligent enough to be a doctor, also warned, “Don’t be too smart or no one will marry you.” Women were not welcome in graduate and professional schools, and the glass ceiling was universally in place. Married women could hardly aspire to combine work and family. Women were considered too different from men to expect fulfillment in anything other than marriage, children and the domestic arts.

Callahan goes on to describe how she was often paired with Friedan on the lecture circuit, because while she agreed with much of Friedan’s social critique, this mother of seven also celebrated marriage and children and found inspiration for her commitment to feminism in the Catholic tradition.

From this vantage point, she questions recent interest in “a theology of women,” and cautions against the revival of “a Catholic feminine mystique.” Instead, she asks,

Should there not be a theology of the human person? Christianity has a great and liberating revelation for creation. Humans, made in the image of God, are called to love, serve, reason, create and transform themselves and the world.

Callahan’s piece comes just a few weeks after America magazine devoted a whole issue to women in the church. As as online subscriber, I opened the email containing the table contents without looking at the title. I noticed that the first article was written by a woman, and so was the second. That’s strange, I thought. Then I saw the third and the fourth. Something was going on. I glanced down the whole page: Helen Alvare, cmt.com’s own Nichole Flores, Eve Tushnet, Diana Hayes, Sr. Helen Prejean, Maureen O’Connell, Brenna Moore, Anna Nussbaum Keating.

Every single feature was written by a woman. I can’t describe the feeling of seeing women inhabiting the familiar features of a beloved magazine that usually includes only one or two female voices. I can only say that I will remember this moment, as I remember when I first saw altar girls, when I first received Communion from an Episcopal woman priest, and when I took my first course from a theologian who was also a mother (Lisa Sowle Cahill).

America‘s editors confessed their failures in inclusivity and pledged to do better:

America needs the voices and gifts of women to fulfill our mission of “interpreting the church for the world and the world for the church.” As increasing numbers of women lead Catholic institutions and serve in parish leadership and theology departments, for example, we invite these women to share with us their thoughts and ideas on all topics, and we pledge to seek out their perspectives. It is important for America to add more women to its roster of contributors and to increase our coverage of issues that affect women in the church.

Yes, it is. Not because women will always want to talk about mothering (though sometimes they will and that’s a good thing), but because they will bring concerns and perspectives that would be missing if their voices were absent. Flores’ piece on the sexual harassment of women migrant laborers is a case in point.

As a theologian, I am particularly grateful to see the inclusion of other women in my field. Recently, I did an informal study of women in theology departments at Catholic universities. I simply counted the number of full-time women faculty listed on departmental web pages. The 30 schools I included were diverse in selectivity, location, and size. Some are small undergraduate colleges, while others have large graduate programs. I found that the percentages of women on the faculties ranged from a low of 10% to a high of 42%.  Schools at the top (Loyola New Orleans, Fordham, Loyola Chicago, and Seattle) are closing in on parity, while others lag far behind. I hope that, like the editors of America, those of us in the academic world can recognize our failures and strive for more inclusivity.

After all, women have been playing important roles in the church, serving, speaking and writing, for a very long time. America‘s editors note that Dorothy Day wrote for their magazine back in the 1930s. Today, I visited the Crypt of the National Basilica in Washington, D.C. because it has an important place in Day’s story. Day had been a convert for several years but struggled to figure out what sort of work she could do as a Catholic. While in D.C. to cover a protest, she went into the lower church of the Basilica and prayed that she would find a vocation that allowed her to harmonize her faith and her commitment to justice. When she returned home to New York, Peter Maurin was waiting for her and together they started the Catholic Worker movement.

Though the story is well-known, I saw no sign commemorating it. I paused for a moment in the Our Lady of Lourdes chapel where, a guide told me, Day probably would have prayed. I thought about Day’s courage in daring to hope that she could be a mother, a journalist, and an important force in the church. She must have believed that both women and men “are called to love, serve, reason, create and transform themselves and the world.” May we, too, have the courage to believe this and act on it, so that the church will better reflect the gifts of all its people. 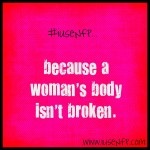