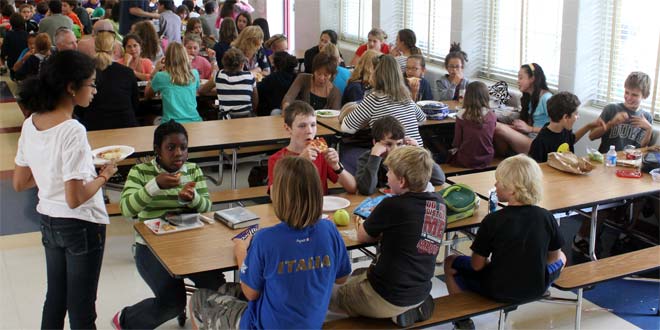 Two posts got me thinking about the value of public schools.  First was the release of a more detailed version of Trump’s budget which proposed to “cut federal education programs by more than $10 billion . . . . and spending on secondary-education programs would be redirected to school-choice initiatives — the chief policy goal of Betsy DeVos, the education secretary.”   Second is the recent post by Beth Haile on the changing face and value of homeschooling. While these posts address two very different thoughts about education, they both have an implied critique against public education.  As both my wife and I went to public schools and all three of our children go to public schools, I feel the need to speak about its value.  While I think we should be wary of a blanket assumption that public schools are academically inferior, here I would like to argue for public schools because they foster two central principles of Catholic social teaching:  the common good and solidarity.

First, public education is a common good. It is meant to advance the well-being of all kids in society, provide an opportunity for rich and poor to do well.  For this to work though, it needs both the rich and the poor. If the wealthy pull their kids out to provide them with a better education, the education of everyone else suffers.  Robert Putnam notes that, as we segregate by wealth, public schools lose resources that are extremely valuable for helping kids to thrive.  Band, sports, and every extra-curricular activity becomes pay-to-play, a situation that excludes the poor and accrues advantages to the rich.  In an interview on Fresh Air, journalist Nikole Hannah-Jones pushes it even further, talking about how school-choice often sustains segregation, a situation that is all too real.  If we lose site of education as a common good, as a good for each and for all, it becomes a system that primarily secures the privileges of the wealthy.

Second, public schools foster solidarity.  As Hannah-Jones continued her Fresh Air interview, she noted that keeping kids in public school seems tantamount to not caring for them.

And I say this — and it always feels weird when I say it as a parent, because a lot of other parents look at you a little like you’re maybe not as good of a parent — I don’t think she’s deserving of more than other kids. I just don’t. I think that we can’t say “This school is not good enough for my child” and then sustain that system. I think that that’s just morally wrong. If it’s not good enough for my child, then why are we putting any children in those schools?

As Hannah-Jones sees it, public schools are about putting the fate of one’s own kids in with the kids of others.  That is the challenge of solidarity, to say “I don’t think she’s deserving of more than other kids.”  And it is a tough decision.  In public school, my kids are exposed to drug sniffing dogs and fights.  They risk being socially marginalized and picked on.  Yet, it is also in this environment that they have made friends across economic and racial lines.  Their friends have siblings with mental challenges and parents who are in jail.  Through their friendships, I’ve been drawn into relationships with these kids and their parents, drawn into these bonds of solidarity.  If I care about my kids, I end up caring about all the other kids at the school.

A Janus Post: 2014 Highlights in Moral Theology and 2015 Expectations