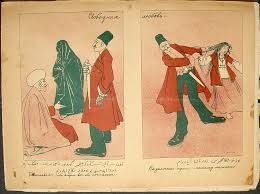 I posted an initial take on some of the themes coming out of the Synod of the Family over at dotcommonweal on Monday. I want to expand on a couple issues here this week. Today, it’s the divorce culture.

Characterizing “the divorce culture” papers over the actual complexity of so many divorce stories. Even the overall statistics are complicated. Whatever might be the practice of celebrities, the vast majority of couples seeking to marry still aspire to lifelong marriage… even though a significant number fail. Avoiding divorce seems to correlate much more heavily with higher income and education than with conservative political views or religiosity – a fact that makes its presence in the culture wars awkward. Divorce remains a major life disruption for most who experience it, often enough including infidelity, betrayal, and potentially nasty fights over possessions and children. Yet plenty of divorces also happen in so-called “low tension” marriages – where no factor like infidelity, abuse, or drugs come into play.

Most people who go through divorce don’t need the Church to tell them that divorce is a bad thing. Yet the persistence of divorce raises the question of what needs to be done to strengthen marriages that, for the most part, aspire to longevity. Barbara Dafoe Whitehead characterized the divorce culture as arising from a shift to “expressive marriage,” akin to what Andrew Cherlin identified as “individualistic marriage.” In these cases, there is a tendency to view the marriage as ultimately instrumental, in service of the flourishing (especially emotional flourishing) of the spouses.

Given this context, it is fascinating to note an overlooked paragraph at the beginning of the Synod’s initial  relatio, issued this past Monday:

Faced with the social framework [of wounded marriage] outlined above, a greater need is encountered among individuals to take care of themselves, to know their inner being, and to live in greater harmony with their emotions and sentiments, seeking a relational quality in emotional life. In the same way, it is possible to encounter a widespread desire for family accompanied by the search for oneself. But how can this attention to the care for oneself be cultivated and maintained, alongside this desire for family? This is a great challenge for the Church too. The danger of individualism and the risk of living selfishly are significant.

Today’s world appears to promote limitless affectivity, seeking to explore all its aspects, including the most complex. Indeed, the question of emotional fragility is very current: a narcissistic, unstable or changeable affectivity do not always help greater maturity to be reached. In this context, couples are often uncertain and hesitant, struggling to find ways to grow. Many tend to remain in the early stages of emotional and sexual life. The crisis in the couple destabilizes the family and may lead, through separations and divorce, to serious consequences for adults, children and society as a whole, weakening the individual and social bonds.

The nuance of these paragraphs is quite striking. As opposed to the tendency to caricature contemporary relationships as “selfish” instead of “self-giving,” the relatio insists on a more subtle distinction. It shows an appreciation for the “relational quality in emotional life” that might be said to be characteristic of expressive marriage, even affirming that family and “the search for oneself” can accompany one another. But here the document seeks to distinguish this proper self-care from a “limitless” or “narcissistic, unstable or changeable affectivity” which can signal not maturity, but immaturity.

This appreciation can be paired with Pope Francis’ well-known metaphor of the church as “field hospital.” The metaphor is sometimes understood incompletely: if the metaphor works, the world must be at war! In this case, the Church appears to be developing an appreciation for the fragile, vulnerable complexity that affects contemporary sexual life. Shorn of firm guidelines and culturally-predictable structures, many people embark on a lengthy and improvised search for intimacy and fulfillment, sometimes starting from a broken family situation, and nearly always encountering heartbreak (at best) or even unexpected violence and abuse (at worst). The central problem then becomes how to shift from this uncertain, sometimes exciting, sometimes painful exploration into a settled and mature relationship. As the document rightly summarizes it, couples find themselves “struggling to find ways to grow.”

In one sense, this is where our popular culture fails us woefully. Music, movies, and even books are overwhelmingly preoccupied with the period of exploration; if these narratives shape the desires and aspirations of exploration, they too often disappear when the demand is no longer exploration but mature growth. Additionally, as my colleague David McCarthy put it in the opening chapter of his Sex and Love in the Home, the narratives offered by Glamour magazine don’t often make for Good Housekeeping life together. Couples may ignore more obvious, mature signs of compatibility in favor of those that more successfully bring enjoyment and bonding in the early stages. It is not only the relationship dynamics that become overly driven by the period of exploration, but also the very principles of mate selection. Worse, given the economic demands of work outside the home, especially for lower income couples, growth in the relationship ends up demanding more than emotional resources they haven’t developed – it demands time and money they don’t have, either.

The relatio thus invites us to imagine what a field hospital church amidst a divorce culture might look like: a school for emotional maturity in the demanding yet rewarding tasks of life together. This is Francis’ “accompaniment” at its best, for it asks the Church to address the divorce culture not through condemnations of selfishness, but through processes that invite people to learn the practices of growing together. Does this involve sacrifice and moments of “hard work”? Yes – but quite honestly, there is hardly a student I teach who disagrees with this and expects relationships to be “easy” all the time. The problem is that they often have very little sense of how to deal with these challenges in constructive ways. If the Church were to be the place they know they could turn, that would do wonders for them – and for forming a culture of marriage and family that does not pit being self-giving against self-growth.