Solemnity of the Nativity of Saint John the Baptist

As a child, when I heard the story of the birth of John the Baptist, I imagined it as the beginning of a hero story, like Bruce Wayne losing his parents and Clark Kent (Kal-El) being sent away from Krypton.  It seemed the beginning of something amazing.

Of course it is, but, now as a parent, the story is more shocking.  This promising son will grow up, become homeless, eat out of trash cans, preach the end of time on street corners, eventually be imprisoned for challenging authority, and gruesomely killed without good reason.  It is many parents’ nightmare.  We want our kids to grow up and be successful, maybe not as a vigilante crime fighter, but happily married with kids, in a safe neighborhood and with an engaging job.  One can only image the stress of Elizabeth and Zechariah even though they were committed to God’s way, giving the infant not a family name, “There is no one among your relatives who has this name”, but rather the name God indicated.

John’s path is that of all Christian disciples, not to seek out glory for self or family, not to pursue success measured by fame, fortune, or power, but to find our true selves through our love of God and neighbor.  Because so much of life directs us to lesser goods, to a less fulfilling life, perhaps we often feel like Isaiah, “Though I thought I had toiled in vain, and for nothing, uselessly, spent my strength” and have to reminder ourselves constantly that “my reward is with the Lord, my recompense is with my God.”

Thus we are reminded that our dignity and value as a person is not tied to whether or not we fulfill the plans and expectations of others or ourselves. Our dignity comes from God and is given to all, even those whose value we might not recognize, to the unborn and aged, to those who are sick and imprisoned, to the successful and impoverished, to those with the “wrong” gender, race, or creed.  “The Lord called me from birth, from my mother’s womb he gave me my name,” says Isaiah.  “Truly you have formed my inmost being; you knit me in my mother’s womb,” the psalmist sings.

There is a great movie starring Kenneth Branagh and Colin Firth called A Month in the Country (1987).  It is about a painter who spends a month at a country church restoring a painting that had been whitewashed.  His work is a delicate balance of removing the covering paint while not damaging the artwork underneath. The process is similar to our life of discipleship, slowing discovering the richness of God’s creation in ourselves by removing the blandness of sin that so often covers it up.

This is what John did.  He found his role in salvation history not through power or even his own greatness but by calling people to repent, live their lives more faithful to God, and pointing them to Christ.  This is what Jesus did.  He became God’s messiah and not the one people expected.

This seems like an easy choice—God not fame, fortune, power—but the choice is usually not this stark. One can imagine John’s parents wanting to intervene in their son’s life to protect him from being mocked or arrested, desiring to bring him home to comfort and protect him, yet this sheltering would have thwarted his calling.  Similarly, we might be concerned about money, especially in the current economic conditions, and make small choices to prepare for retirement, to save for a rainy day, to take care of our children.  Nothing is wrong with these, but we can also, over the slow passing of time, find ourselves so focused on these goods that we loose sight of the needs of the neighbor and the stranger and to the God that appears in their form. 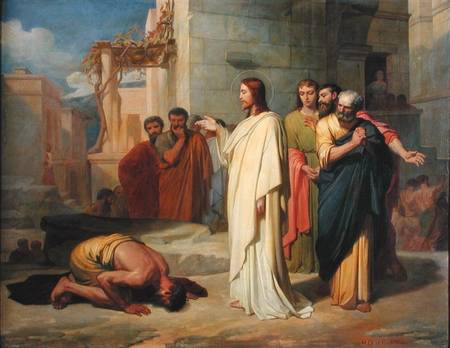 Lectionary: God of the Broken-hearted