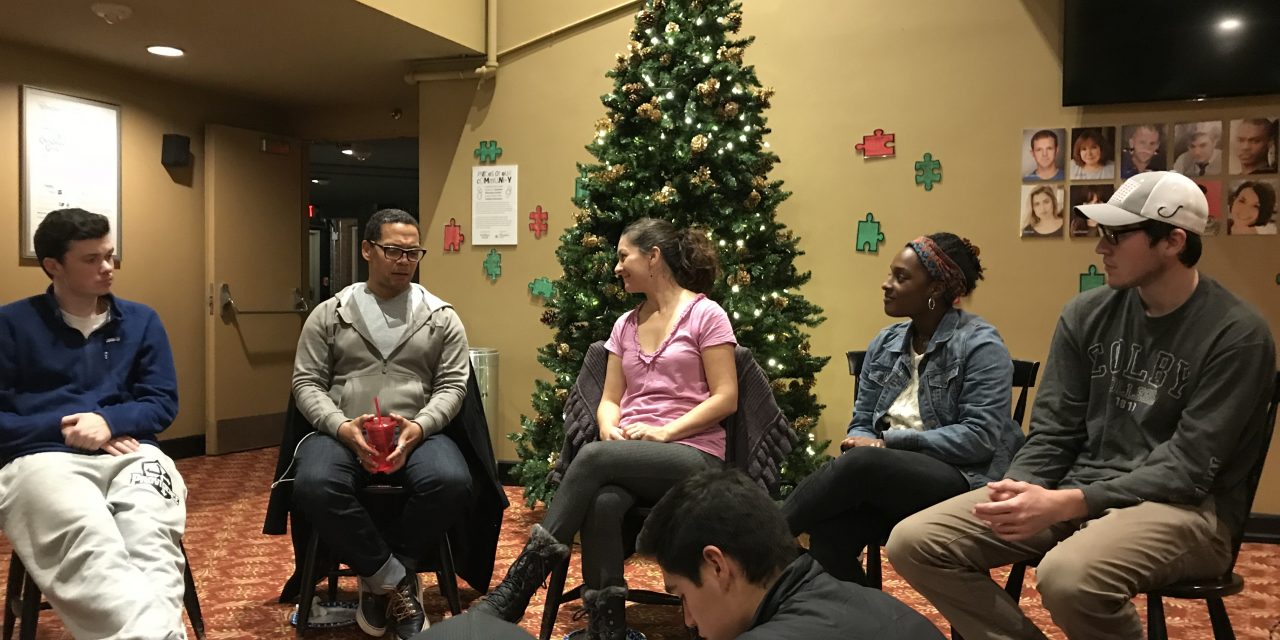 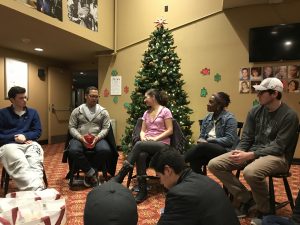 I’ve been thinking about Ebenezer Scrooge a lot this Advent. I took students in my “Introduction to Service in Democratic Communities” course to see a production of “A Christmas Carol” at Trinity Repertory Theater in Providence. My community partner co-instructor for the course, Joe Wilson, Jr., was playing Scrooge. We thought the story would be relevant and rich to help us think about the themes of the course, which include not only service but also questions about communities and what we want them to be, as well as the kind of people we need to be to accomplish this. And we loved the idea of getting them off campus, into the community and the theater.

In our students’ final papers, Scrooge loomed large for many of them. Some of them were brilliant applications (my favorite: how would Scrooge have helped people differently at the end of the play had he read some of our course materials on assets-based community development?). But I noticed that many of them just didn’t quite believe that Scrooge had really changed. They had a sense that he threw a bit of money at the Cratchits and others, but that he would most likely return to his miserly ways soon enough. It occurs to me that my students aren’t alone in this. When we hear or use the name “Scrooge,” it’s generally being used to in reference to miserly, greedy, selfish behavior, or some basic “bah humbug” grumpiness in the face of Christmas festivities. It is rarely (if ever!) used to remind us of what the story is really about: the possibility of conversion and the necessity of care for our fellow human beings.

Ebenezer Scrooge is a man who has turned in on himself. As she breaks things off with him, his (soon-to-be former) fiancé puts it this way:

“You fear the world too much…. All your other hopes have merged into the hope of being beyond the chance of its sordid reproach. I have seen your nobler aspirations fall off one by one, until the master-passion, Gain, engrosses you.”

Scrooge, who grew up without much, just wants security, at least at first. The fear of poverty has driven him to the pursuit of wealth. And the pain of loss—the deaths of his mother and his sister, the departure of his fiancé—has driven him to shut out people. It is a common story. We just want to feel safe enough, secure enough. But our sense of what we need for that security grows. And the less love we have in our lives, the less we feel connected to those around us, the more we let ourselves be driven by fear instead of love and hope and joy.

Jacob Marley’s ghost offers Scrooge a very interesting picture of our life and afterlife, saying that it is required of everyone that we “walk abroad” among our fellow humans to try to do them good. If we fail to do so in our lifetime, we (like Marley) will be condemned to walk among them after we die, feeling this yearning to do them good and yet no longer being capable of it. Hell, indeed. By contrast, we are offered such good and kind characters as Scrooge’s nephew Fred, who swears he will keep inviting Scrooge in, especially at Christmas, no matter how Scrooge responds. And, of course, we get Tiny Tim, who tells his father that he hopes it will be pleasant for people to see him in church on Christmas day, to help them recall the one who made cripples like him walk. Tim’s love and joy in the face of suffering are exemplary, and they call Scrooge (and us) both to relieve that suffering if we can and to emulate that love and joy, both that of Tiny Tim and that of the One who, Incarnate among us on the Feast of the Nativity, made the lame to walk, the blind to see, and preached the Good News to the poor. “A Christmas Carol” is a serious invitation to participate in the corporal works of mercy: to feed the hungry, give drink to the thirsty, shelter the harborless, clothe the naked, care for the sick, visit those in prison, and bury the dead. And of course, engaging in these works is an invitation to encounter Christ incarnate (again, still), because He said, “Whatsoever you do to these least ones, you do to me.”

After the production of “A Christmas Carol” at Trinity Rep, audiences are invited to donate to the Rhode Island Food Bank, in case Scrooge’s change of heart has awakened their desire to feed the hungry. And this year’s directors, Angela Brazil and Stephen Thorne, decided to include eighteen different community groups as extras in the production (one group in any given performance), as a way of highlighting some local groups who do such good work all year round. (NAMI of Rhode Island, which offers education and support to those living with mental illness and their families and where I volunteer, was one such group.)

Too often, the stories and rituals, the connections and relationships that we celebrate at Christmas are just so many good times. Afterwards, we repack the decorations and move on unchanged. But I will continue to think about Scrooge in the coming days (especially since I will return with friends to see Trinity Rep’s production again before the end of the run). After he has had the encounter with Marley’s spirit and the Ghosts of Christmas Past, Present, and future, he says, “I will honor Christmas in my heart, and try to keep it all the year. I will live in the Past, the Present, and the Future…. I will not shut out the lessons that they teach.”

To honor Christmas is to honor the Incarnation, to honor the fact of God made flesh in one particular person, wrapped in swaddling clothes and laid in a manger. But it is also to honor the privilege we have been given of enfleshing him anew in our own works of mercy. One other interesting thing about my students’ final essays: many of them, skeptical at Scrooge’s change, wanted to convey their conviction that this course had changed them. In particular, they wanted me to know that the service among some vulnerable populations had been an extraordinary experience, introducing some of them to pockets of the world (here in Providence) that they had not known existed.

How often do we say this sort of thing—that a course, a conversation, a relationship, a work of art, a book, or another experience—has changed us profoundly, and that our lives will never be quite the same? And yet we fall back into our ordinary lives. Dickens says that Scrooge was “better than his word”; he kept every promise he made “and infinitely more.” May we all be like Scrooge this Christmas and let Christmas change us into people who live as though we believe in a God who so loved the world that he became flesh, walked among us, and died for us, that he might send us the Spirit who empowers us to live and sons and daughters of God, as brothers and sisters to all.

And may God bless us all, every one! Merry Christmas!

Identity, Life, Love: Reflecting on Foundations of the Moral Life in Light of Rocketman & Educated﻿