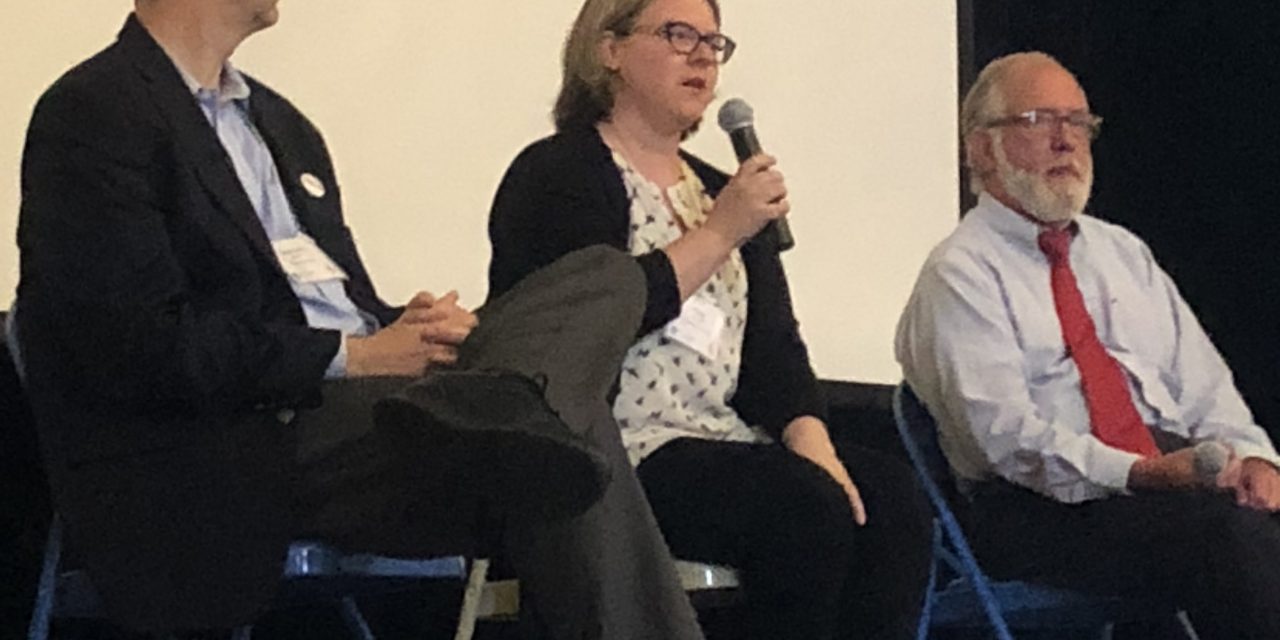 At this year’s College Theology Society annual meeting, Steve Werner (on the far right of the picture) was part of a plenary session reflecting on contingent faculty in Catholic higher education.  What follows is a portion of his talk.

I am an adjunct in the Midwest.  Since I began teaching college in 1990, I have taught the equivalent of 527 3-credit classes. I have taught at seven different universities/colleges in fourteen different programs.  My record is thirteen courses in one semester, although I could not do that now.

The biggest problem I face is that things are constantly changing, and nothing is secure. An adjunct can be teaching the same courses successfully for several years with positive course evaluations. Then, something changes, and the adjunct loses the courses. This has happened to me some fifteen times. An adjunct can lose courses because a program changes or a program is cut.  Some adjuncts lose courses when full-timers are given their courses.

New bosses are a constant worry.  Since they sometimes do not take the time to understand what has been done in the past, adjuncts can lose courses.  One key to surviving as an adjunct is building a relationship with the chair.  A new chair can mean starting all over.  At one university, a new chair set up the schedule without bothering to look at how it was done in the past. As a result, for the next year, I was cut $25,000 worth of courses—by accident.  I had built up a large repertoire of courses over many years, and I was never able to recover from the loss.  Several times I have lost courses that I had taught for many years because they wanted to make less use of adjuncts only to discover in time they did not have enough full-timers to cover the courses.

My contribution to these universities is significant, yet I am still at the bottom.  I do introductory courses with almost never a chance for consideration for advanced courses.  I have met many full-timers. Many are more knowledgeable than me in their areas since they have been supported in focusing their efforts, but they are not fundamentally in a different class than me.  Yes, many full-timers are ahead in research, but they get support for that. How much research could they accomplish teaching five or more courses a semester?  In the past years, I have worked hard at my research, despite the lack of support. I care about my research, but also I want to prove that my ability is equal to that of any full-timer. (I will concede that many full-timers have “out-meetinged” me. There is one benefit of being an adjunct: no meetings.) But in the end, the current system is two-tiered, with vast differences in pay and benefits for doing the same work in the class room.

At the two universities where I currently teach, I have taught over 220 courses at each school, which is more than the vast majority of full-time faculty.  At one university, since I have taught so many introductory students with large numbers, very likely I have gotten to know more students in the classroom than any other faculty member. At the other university where my courses have included over a hundred one-credit seminars and large lecture hall courses are not used, I am fairly sure I have taught more different students from the university than any other faculty member, by a large margin. However, none of this counts for anything except to emphasize the significant contribution of adjuncts.

I have had my horror stories.

Many years ago, at one university I had built up a large following of students taking my courses in Christianity. (Thirty students took my elective Medieval Christianity course one semester.)  I was banned from teaching Christianity because I did not agree with the chairman who insisted that Jesus was gay.  I worked in another interdisciplinary program for twelve years and led in the creation of new courses and attracting students to take the courses. The program was canceled, and no one even bothered to tell us teachers.  I found out — by accident — seven months after the decision, by which time I had lost a semester to line up new courses elsewhere.  I had $10,000 of courses a year in that program that was ended.

At one university, they recognize service years for both full-timers and part-timers.  This is nice. They give awards for every five years of service in a presentation with small gifts. When I told my chairmen that I was up for the 20 year award with a fellow adjunct in the department, he said, “and nobody cares.” I have had two chairs who never answered emails.

The fundamental reality underlying the adjunct situation is that there is a huge oversupply of people who want to teach college.  Universities use adjuncts because they can.  Any adjunct who gives up is easily replaced.  If the adjunct who quits was a great teacher, often no one notices or cares.  I joke that there is an “oversupply of saps.” Perhaps, I am the biggest sap of all.

Many adjuncts face the problem of their courses being cancelled at the last minute, even after they have done extensive class preparation.  A few places give some amount for a cancellation.  Most do not.  Luckily, today with online course registration, most teachers can monitor enrollments in the weeks before a class starts, so there are fewer surprises.  Yet it is still difficult when a class is cancelled due to low enrollments, over which an adjunct often has little control.  In one program where I taught, the email announcing a course cancellation always included the line, “We apologize for the inconvenience.”  Not so comforting when I lost the course that would cover my modest apartment rent for the semester.  When a course is cancelled, it is usually impossible to replace that income for that semester.  What is ironic is that at colleges and universities with massive budgets, we adjuncts at the very bottom have to bear the financial risk of courses that do not fill.

Those adjuncts, such as me, who want to do research are totally on their own.  Most adjuncts receive no support for research.  Making it worse is that the numerous grants out there typically are only for full-time teachers.  I have only found two grant institutions that would allow me to apply.  Ironically, for those universities that emphasize research, if modest support for adjunct research projects in the $2,000 – $5,000 range were provided, such universities could both provide better support for adjunct careers and have more articles published more cheaply than the cost to support full-timers writing articles.

I want to do more than just teach.  I have attended some thirty academic conferences.  However, with only one exception, I have had to pay all my expenses.  My conference name badge does not state where I teach.

I continue as an adjunct, in part, due to necessity.  My occasional attempts to find other work with more security have been unsuccessful.  Also, I have been able to do extensive writing in between classes, although I now face the difficulty of getting work published.  I love teaching most of the time; I am just worn out by the constant uncertainty and stress over whether I will have enough courses the next semester and make enough money.  Also, I am frustrated by the lack of opportunities to create new and even better classes.  I often refer to the financial uncertainty as “The Nightmare.”  Words from the Bhagavad Gita sometimes come to mind; “You have the right to work, but never to the fruit of work.”  However, this is just about money.

I am a teacher because I believe in the value of being a good teacher. Teaching is a most noble profession. There is a great purpose to what we teachers do.  I believe I have done very good work in the classroom over these many years and that students appreciate good teachers.  Hopefully, for most of the students in my classes, I have stirred their imaginations, encouraged them to think, and got them interested in exploring the world around them.  That is what we teachers do.