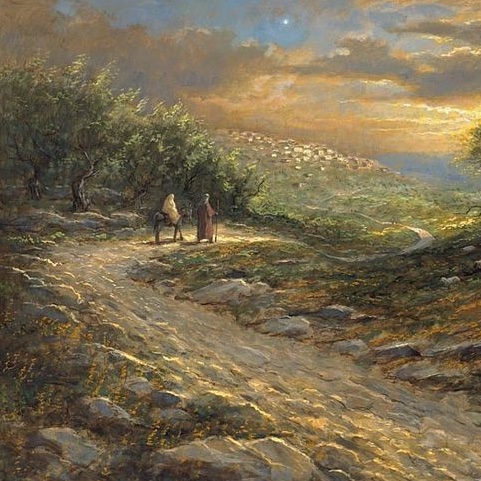 This is a guest post by Brendan Murphy, a theologian, homeschooler, artist, beekeeper, and farmer who lives with his wife, Heather, and their five children in northeast Pennsylvania. He holds degrees in Theology from The University of Scranton and Fordham University. Over the past 20 years, he has taught Theology in a variety of contexts from the parish to the university level.

All the readings for the Second Sunday of Advent may be found here on the USCCB website.

In 1965, inspired by Martin Luther King, Jr.’s march on Washington, D.C., Curtis Mayfield wrote the Gospel-infused classic, “People Get Ready.” For the non-traditionalist, it could very well be seen as a theme song for Advent, and for this week’s readings in particular. The term “Advent” (coming) possesses a double meaning for Catholic Christians. The most obvious refers to the approaching celebration of the first coming of Christ in the musty environs of a stable. The oft-forgotten secondary meaning is connected to Christ’s second coming in glory. This second coming will take one of two shapes, depending on the individual. The first is more common, yet no less dramatic—our personal encounter with, and judgment by, the risen Christ at our death. The other, of course, is the more public and final Second Coming at the end of time.

Advent has traditionally been seen as possessing a penitential aspect, though this is rarely (if ever) highlighted, in my experience. It is not an accident, however, that the liturgical colors for Advent and Lent are identical. It can be spiritually profitable to recover this aspect of the season, using it to root out vice and cultivate virtue in anticipation of both Christmas and the culmination of our life. To that end, this week’s readings provide us with a helpful two-step approach to meaningful spiritual growth: (1) Recognizing and accepting our true identity, and (2) Doing the work necessary to prepare the way of the Lord.

In the first reading, taken from Baruch, a dramatic change is taking place. The exiled Israelites are shedding their garments of mourning and misery for new apparel more in line with who they are in relation to God. They put on the “splendor of glory” (5:1); they wrap themselves in the “cloak of justice” (5:2); they wear “the mitre that displays the glory of the eternal name” (5:2); and they return on “royal thrones” (5:6). What do such accoutrements indicate about the people’s identity? They are royalty—sons and daughters of the King of Kings. Due to their experience of exile, both physically and spiritually, the people have forgotten who they are. In “remembering” them, God is actually reminding them of who they truly are.

How often we need the same reminder! “Royal” is not synonymous with “perfect,” but it does imply a certain ingrained dignity that exists independent of specific behaviors. How would your perception of yourself change if you found out tomorrow that you are descended from kings? Well, you are: as sons and daughters of God, we are all royalty. The challenge is to live up to the dignity inherent to that identity. And the even greater challenge is to remember that others—including those we despise—are also part of the same royal family. Simply being aware of this dignity can be spiritually profitable for those, like myself, who need to control their tongue. If you wouldn’t use that tone with the Queen of England, then you shouldn’t use it with your difficult co-worker.

Returning to Baruch, we are told that God Himself will bring the people out of exile. Here he refers to a common practice of ancient kings whenever they were about to undertake a tour of their kingdom—highway construction. It was common for potholes to be filled in, debris cleared away, damaged roads repaired, and inefficient paths improved, all in order to increase the ease of the king’s journey to his destination.

In this week’s Gospel, John the Baptist is presented as the foreman of just such a construction project. His mission—which he encourages all who hear him to embrace—is to prepare the way for the King. This task, predictably, includes making paths straight, rough ways smooth, and filling in valleys. Yet this time, the valleys to be filled and roads to be straightened are internal and not external, for the destination of the Lord is the heart. And how is this work accomplished?  Luke tells us precisely what John’s tools of choice are: repentance and baptism for the forgiveness of sins.

Repentance is turning away from sin and towards God. It is never a one-time act. Most of us live in a cycle of sin—repentance—sin—repentance. While such a situation can seem unbearable, and many of us are tempted to despair of ever breaking free, this cycle itself can often be a vehicle for God’s grace. For one thing, moral failure keeps us humble and is good insurance against the trap of self-idolatry, to which our society seems especially prone in an age of carefully crafted social media accounts. Likewise, the fact that it is a cycle and not a straight line (sin—sin—sin—sin) is in and of itself a sign of spiritual maturity. It is a cycle precisely because we are aware of our need to repent and start anew.

For those of us already baptized, the forgiveness of sins is achieved in a number of ways. For example, sacramental reconciliation, a daily examination of conscience/act of contrition, and (in the case of venial sin) frequent reception of the Eucharist. It could be argued, however, that when we forgive those who have sinned against us, we do the most to repair the most “road” for the Lord’s coming. This strikes me as particularly true in a cultural environment where inciting, feeding, and promoting a constant state of rage against “the other” (whomever they may be) is both socially acceptable and commercially profitable. An Advent focused on remembering Jesus’ explicit teachings that the measure we give will be the measure we get (Lk. 6:38), and that we can only ask our Father to forgive us “as we forgive those who trespass against us” (Mt. 6:12), will be an Advent well spent.

The acts of repentance, which include both seeking and receiving forgiveness from others, as well as granting forgiveness to others— these require hard work. They can often seem impossible. In our second reading, St. Paul offers us good news in this regard: We are not laboring on our own. He writes, “I am confident of this, that the one who began a good work in you will continue to complete it until the day of Christ Jesus” (Phil 1:6). In essence, God not only desires the rough roads in our souls to be made smooth, but He works alongside us to accomplish this goal. He is a Servant King—not a distant dictator—who freely offers to share His “yoke” with us so that we may learn from Him (Mt. 11:29). Cooperating in this work is the surest way to “be pure and blameless for the day of Christ” (Phil. 1:10). Maranatha; come, Lord Jesus.

Repent! The Third Sunday of Lent