As I walked off the plane and into Khartoum Airport, I looked around to see if the other women were covering their heads. I had a scarf ready; I did not want to stand out any more than I automatically did. From Ireland and Costa Rica to the Philippines, I was no stranger to waiting on passport control lines – but this was the first time I held my breath and said a prayer – Please Lord, let this go smoothly. This was the first time I was anxious – would I be allowed in or would my hosts have to come to my aid? It was the first time I was traveling to a country which required an American to get a visa and one where obtaining a visa as an American was difficult.

Technically, I had all of the proper paperwork – visa, letters of invitation, etc. But – there had been a mix up in the visa process and mine had been “corrected and extended” by the Embassy in Washington, DC.  I knew the rest of the doctors and nurses had arrived the day before without incidence – but chances were that whoever was working today would not know or remember that.  It was not the first time I traveled alone, but it was the first time I felt alone.

At passport control, the woman hesitated, looked at everything at least twice…then stamped my passport and let me through. At each of four checkpoints before I got to the area where a driver was waiting, the process repeated itself. They looked at my passport, looked 2x at my visa, asked me questions, paused – as if deciding whether or not they believed me – then waived me through. No one actively hassled me but at each of the points that suspicion and pause were clear before waiving me through.

I had arrived in Khartoum, Sudan and upon seeing the driver holding a sign with my name breathed a sigh of relief. (Later I learned everyone breathed a sigh of relief when the driver called to say we were on the way to the hotel).  In the car, I observed a bustling city of Khartoum in almost disbelief – finally, I was here. My first research project in Africa and here I was safe and sound in Khartoum.  (It was I hope the first of many such trips….). The airport process was one where I felt particularly vulnerable.  At that point, I thought that vulnerability was over – until I arrived at the hotel and the desk clerk asked me to leave my passport.

“I need you to leave me your passport and the two photos.” He said quite reasonably. I knew that I needed to bring 4 passport size photos with me and I knew that there was a “registration process” once I arrived in Khartoum. Yet, knowing all of that – I still was not prepared for just how difficult it would be to surrender my passport. I looked at him perplexed as he assured me that he had the others passports and had been waiting for mine – the hotel would take care of the registration process and securing our exit visas for us. All of this I knew was proper protocol, and yet, in that moment I felt vulnerability I had never felt before.

I had photocopies of everything – my visa, my passport, my letters of invitation, etc. I had no doubts at all about my safety being secured by our wonderful hosts (whom I now call friends).   I was excited to be in Sudan. Yet, for the first time in my life, in handing over my passport I felt exposed and vulnerable in a way that is difficult to communicate.

Despite the security of my group, as an ethicist, I was still acutely cognizant of what it meant to be without that documentation, a reality quite foreign to most Americans. We have the luxury and privilege of easy access to much of the world. Short term freedom of movement with an American passport is easy and that passport affords us significant protection.  It is a privilege that I cherish – but one that I have by the accident of birth, not choice or accomplishment.

Yesterday, Dr. Kristin Heyer,   from Santa Clara, a colleague I greatly admire, gave a talk offering some touch points for a Christian ethic of immigration. She recounted a story of Santa Clara alumnus who is undocumented and the vulnerability this young man constantly experienced driving cross country.  As I was listening to audio of his story, my mind began to wander to that hotel lobby.

“I need you to leave me your passport.”  Within a few days, I would have my documentation back, but for those days – I was very conscious of its absence.

As we head into a long overdue national conversation on immigration, I think conversations on “documentation” are often obscured because the vulnerability of the undocumented population is so alien to the experience of a natural born American citizen.  In a conversation dominated by “illegal” versus “legal” what is often obscured, forgotten, or ignored is that we are talking about human persons whose dignity is not contingent upon documentation.

Once I arrived in Sudan, I experienced nothing but overwhelming hospitality from the Sudanese people I met –yet, I felt the extent of my vulnerability in that hotel lobby.  It was the particular awareness of the contingency with which I had been granted access, permission limited to the city of Khartoum.

I had no rational fear that I would not get it back in a few days – as promised. (Yet, exit visas are often withheld to make life difficult for Catholic priests and nuns working at missions. Even as I felt exposed, I was also aware that I was not being subject to assertion of power that often accompanies the documentation process for others. Unlike some of the sisters I met, I was not worried that “paperwork” would cause me to miss my flight at the end of the week.)

For many people coming to the United States, with holding of their papers – passports is a primary tactic of human traffickers to control and enslave workers.  Theirs is a violence and fear that I cannot begin to imagine. I did not have to worry about spending months or years in the shadows paralyzed by that vulnerability and fear. And yet, for millions of men, women, and children who are my neighbors, that is their reality.

As I left Khartoum, once again passing through 4 checkpoints where they repeatedly checked my “papers,” I gained a new perspective on a reality my American “papers” usually shield me from. At the foot of the airplane, the 4th time my exit documents would be checked, it began to wear on me – could I really have gotten to that point without proper paperwork? The point is to assert power over others. I did not have the power to get on the plane unless they, even at the foot of the steps, granted me access – finding my documentation sufficient.

There is a fear that becomes habituated in the repetitive “show me your papers,” which reiterates power and vulnerability.  It is why many, me included, so strongly oppose the rash of legislation in states like Arizona which place and make this even more of a daily fear for the undocumented as well as those whose “belonging” get called into question because of their ethnicity.  For me, my experience in Khartoum reminds me that answering the Gospel requires that I step out from behind the comforts of my US Passport and see the humanity of those a lack of documentation hides in the shadows. 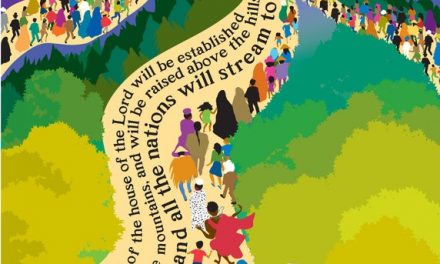