In Luke’s gospel, Jesus tells the story of the poor man Lazarus.  Lazarus lived on the door step of a “rich man who dressed in purple garments and fine linen and dined sumptuously each day.”  Daily, this rich man had to walk out of his door and step over Lazarus who was “covered with sores” and “would gladly have eaten his fill of the scraps that fell from the rich man’s table” but, instead, had only dogs pay attention to him.  They came and licked his sores.  Lazarus’ and the rich man’s fates are well known, but, at the end of the story, Abraham reminds the rich man that he had the law, the prophets, and even one who rose from the dead to realize that this blatant disregard of a person in need is wrong.

The recent reports on the economy seem hauntingly similar. The rich man dresses in fine stock prices—“The Dow past 14,000 to within 75 points of a record high last week”—and dines sumptuously on profits—“Corporate earnings have risen at an annualized rate of 20.1 percent since the end of 2008”.  Meanwhile, on the door step, sits poor Lazarus who would have eaten of the scraps of the rich man’s table but instead has had his “disposable income inched ahead by 1.4 percent annually” since 2008.  Lazarus’ only companions are the dogs of sequestration that come and lick his sores:  The economy is estimated to loose about 700,000 jobs without substantially affecting profits or stock prices.   Unemployment, Medicare, SNAP, WIC, Head Start, Public Housing, and Special Education are all cut.

There is at least one difference between Jesus’ parable and our situatioin:  In our situation, many of the Lazaruses are working.  Salary growth is anemic even though worker productivity has soared since 2008 (although it may have peaked as the last quarter of 2012 saw a drop in productivity).   Either corporations want to hold onto their profits because they can, not needing to hire more workers or pay workers more to make money, or corporations are fearful about the future as ongoing political intransigence means economic instability.  Jesus seemed, at least in this parable, to be pessimistic about a change from above.  He concluded his story with a lack of repentance for the rich man in hell as well as the rich still on earth.

Whatever the cause, Lazarus on the doorstep is being ignored.  As Christians, we disregard the law, the prophets, and the one who rose from the dead to our ruin.  Perhaps this Lenten season of fasting, almsgiving, and prayer, provides us with some direction from the bottom up.  For fasting, maybe we should be eating less and donating more to the local food banks.  For almsgiving, maybe we should be donating more to Catholic Charities and their work of meeting both short term and long term needs of people.  Finally, we should be both praying desperately to God to help us find a way forward and praying by visiting neighbors to commiserate or see if any help is needed. 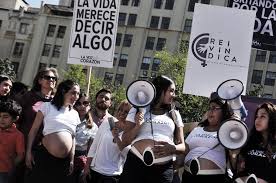 “The Voice of the Heart”: Chilean Women Give Voices to their Prenatal Children