Last week, I participated in a couple of online discussions on why people attend church.  Most church goers suggested that it was about “being renewed” and “getting filled up again” for the week.  These aren’t wrong answers about worship or church, but I find myself wondering if going to church “to be filled” is a strong enough answer, especially in an age like our own.

Most of my students (and at one point in my life, I counted myself this way too) consider themselves “spiritual but not religious” and would say that a prayer like the “Our Father” or a “Hail Mary” or the Eucharistic Prayer is just a rote prayer that doesn’t mean anything.  Most of the time at Mass, people don’t look like they’re getting anything out of it, and in fact a lot of them look downright bored or angry.  My students know, themselves, that they only reason they’re at Mass a lot of times is because they felt coerced into it.  On their view – religion is mostly trappings – and my students and others feel trapped by those trappings – unable to see or experience God, and not liking what they perceive as the rules and regulations that coming with the trappings.

Moral theology, on their view, is simply a reiteration of the rules and regulations.  By contrast, they know they can go for a run through the woods behind campus and “feel” free, have energy, and some semblance of joy.  They might hear about joy in a Sunday’s hymns and scriptures, but they won’t feel it there, and they’ll think, “This isn’t at all authentic.”  What do you do, but go where you do see that joy and that truth?  Yeah, in light of that, I can see why my students would think that I, and anyone else saying they go to church to be “filled” must either be wacko, or an old fuddy-duddy.  (Or both?)

One of those joyful scriptures is this morning’s gospel: the Transfiguration (Luke 9:28b-36).  The story features Jesus ascending a mountain and being transfigured so that glory shines around him.  Peter, John, and James are with him and can scarcely believe their eyes.  “It is good that we are here,” Peter proclaims.  He wants to stay and be surrounded by the glory he sees and experiences.  And then from a cloud, God speaks a near-reiteration of the words he spoke at Jesus’ baptism: “This is my chosen Son; listen to him.”  They see God and hear God, and it is glorious.

The Roman Catholic lectionary doesn’t continue through the next few verses (though other churches using the Revised Common Lectionary will read Luke 9:28-43 on the Sunday BEFORE Lent).  But it is those next few verses that maybe help put the Transfiguration into some perspective.  The day after the Transfiguration, the disciples and Jesus come down from the mountain.  Immediately, they encounter a man who begs Jesus, “Look at my son.”  Using words almost identical to God’s own words about Jesus on the mountain top,  the man protests that Jesus’ disciples could not heal the man’s son.

Jesus sighs – rebukes his disciples (or us, it is hard to tell) and proceeds to heal the boy, all while saying that his disciples are a “perverse” generation that doesn’t understand.  A preacher friend of mine, Erin Martin, says, “It’s like the disciples couldn’t see the small changes that Jesus was bringing to their lives.  They can heal and they do, later on.  But here, they are powerless because they don’t see that Jesus really makes a change.”  The Transfiguration – that was a Big Change, but despite the Big Change, the disciples still couldn’t see how they’d changed enough to be able to heal, and do many other things besides.

The mountain top experience of the Transfiguration was obvious and mind-blowing change; the change down at the bottom of the mountain was far less obvious.

I worry sometimes that ethics and worship get discussed only in terms of Big Decisions and the Obvious, much like the Transfiguration, where the answer is “supposed to be” Yes or No.  Of course we want to stay on the mountain top of the Obvious – it’s easier to figure things out, easier to see the forest for the trees.  But as a moral theologian, I have to say that if anything is clear after all these years, it’s that when we’re off the mountain top things don’t look all that clear, even and especially when we encounter the supposedly Big Obvious Issues.

Torture, for example, is what I’d name as a Big, Obvious Issue, usually categorized as an intrinsically evil act.   The Catechism of the Catholic Church suggests: “Torture which uses physical or moral violence to extract confessions, punish the guilty, frighten opponents, or satisfy hatred is contrary to respect for the person and for human dignity.”  (2297b)

But perhaps to underscore the way in which we just don’t often have the eyes to see even this Big Obvious Issue, the Catechism continues:

In times past, cruel practices were commonly used by legitimate governments to maintain law and order, often without protest from the Pastors of the Church, who themselves adopted in their own tribunals the prescriptions of Roman law concerning torture. Regrettable as these facts are, the Church always taught the duty of clemency and mercy. She forbade clerics to shed blood. In recent times it has become evident that these cruel practices were neither necessary for public order, nor in conformity with the legitimate rights of the human person. On the contrary, these practices led to ones even more degrading. It is necessary to work for their abolition. We must pray for the victims and their tormentors. (2298)

Members of the Church, no less than non-members, are unable to see grave sins and evils.  Indeed, the thrust of the Transfiguration passage is entirely on the disciples and their utter inability to see.  We, too, as a Church, have been unable to see – astoundingly, and maddeningly unable.

We have been made very, very aware, recently, of the ways in which the Church has perpetuated torture and other acts that are “contrary to respect for the person and for human dignity.”  The clergy sex abuse crisis is one of these, as is the story in NPR this morning on the Irish laundry women who were forced to work without wages for the church in Ireland.  How is it, we wonder and cry, that things this terrible could go on for decades?

This is grave, unconscionable evil.  It is evil that makes many Catholics I know want to weep, if not throw things; want to demand justice; want to leave the Church entirely.  It is our fault.  There is no scapegoat we can (nor should we) blame.

So where do we go from here?  For many, it is indeed tempting to leave.  I suggest that the ones who don’t leave do so for one main (obvious?) reason: “This is my chosen Son. Listen to him.”  If you don’t believe in Jesus, it makes absolutely no sense to stay.  The world outside the Church is by no means perfect; all the problems that the Church encounters are human problems – adding in religious pomp and circumstance to that madness makes no sense at all.

But if you do believe, it is just as important to learn to recognize the Big Obvious Mountaintop events as much as the little, less obvious everyday off-the-mountain events.  Indeed, it is probably more important.  Jesus is also there in the apparently “rote” prayers and the daily grind (and bread).  We might not see him initially, but just as years of walking up steps wears a path in stone, so too do years of prayer form us. I don’t usually write lectionary posts for this blog (and this isn’t really a lectionary post either), but this morning’s mass’s gospel lesson is sticking in my mind, even as I am reading a story called “Torture at Guantanamo” online this afternoon.  The torture story discusses Lt. Col. Stuart Couch’s decision not to prosecute a Guantanamo Bay prisoner who had been tortured.  Lt. Col. Couch had returned to military duty after the death of his friend Michael Horrocks in the September 11th terrorist attacks, and was the prosecuting attorney of several terrorist suspects.  When he went to have meetings at Guantanamo Bay about prosecuting prisoners there, he began to unearth several activities that could be considered coerced interrogation (strobe lights, poundingly loud music, sleep deprivation, sexual humiliation, and on and on).

The interview reveals Lt. Col. Couch’s concerns, but more than that, it ties the everydayness of Christian liturgy to a realization about the sin of torture.  He says:

I was wrestling with these—with this legal issue and with this ethical issue. And then, ultimately, you know, one Sunday when I was in church, it all kind of came together. I describe myself as an evangelical Christian. I was attending a church service in the Anglican tradition, and it was a baptism of a child. And anybody who’s ever been to one of these services knows that at the end of the baptism all of the congregants in the church stand up, and the pastor goes back and forth with basically the tenets of the Christian faith. And one of those tenets was that we would respect the dignity of every human being. And it was at that time, when I was professing that on Sunday, begged the question to me, if this is what you believe as a Christian, then how does that inform how you’re going to act the other six days of the week? And that really, for me, was the moral point that I came to of what I had to do next.

The baptismal liturgy (similar, in many ways to Roman Catholic baptismal liturgy) became, for him, a way of seeing the world, and thus it became “ethics.”  But more than that, he realized that, after all this time – this is who he is.  He was always in the process of becoming what he was learning in the liturgy: a person who respects the dignity of all human beings and thus a person who rejected torture to his employers, and refused to prosecute prisoners whose confessions had been wrought by suspected torture.  The prayers are formative – Jesus speaks to us – even and in spite of and because of the evil in our midst.  We become conformed to Christ in spite of ourselves.

I wonder if Lt. Col. Couch could have gotten to the point he did on torture if he hadn’t been going to worship week after week, and known that this is what always happens at a baptism.  If it was just a one-off, would he have been able to see Jesus?  I suggest that it is because the liturgy became ordinary, even rote – and because it was forming and shaping who he was as a member of the Body of Christ – that he was able to take a stand on how baptism informs not just what he does at church but “how you’re going to act the other six days of the week”.  In that way, ethics is not primarily about the Big Moments or the don’ts, the rules and the regulations. 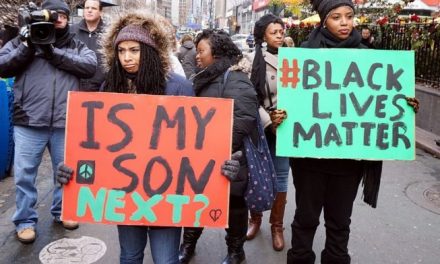 CTS Board Statement on US Racism