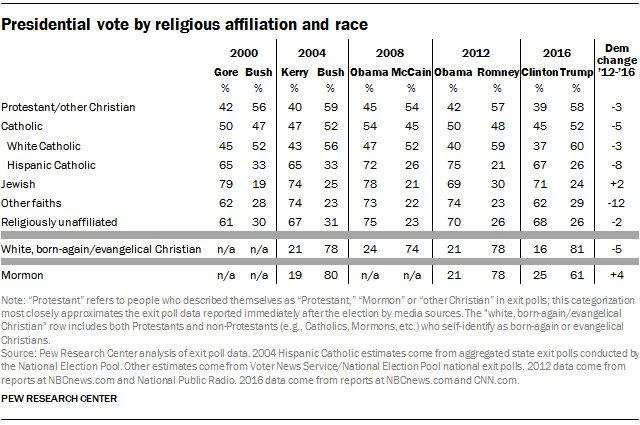 We have been talking all week about healing and unity and reconciliation after a very surprising election. But I want to take a moment while our feelings are still raw to look at the numbers. Exit polls showed a strong showing among Evangelicals (81% voting for Trump). Some pollsters wondered if Trump, whose moral character is obviously completely at odds with the worldview of the so-called “moral majority,” would show a strong support on election day. They did, with a slightly higher percentage voting for Trump than did for Romney in 2012. Catholics too showed a slight increase in support for the Republican Party from 2012, with 52% voting for Trump compared to 48% for Romney in 2012. The Catholic vote is deeply divided not only on itself, but also shows a deep division when you look at white Catholics versus Hispanic Catholics, where the numbers are basically reversed. 60% of white Catholics voted for Trump; 67% of Hispanic Catholics voted for Clinton.

This surprises me, and I am curious if it surprises other readers. As a Catholic who reads and takes seriously Faithful Citizenship, I saw little that a Trump candidacy had to offer (I didn’t vote for Clinton, either, exclusively because of her stance on abortion. I chose the independent Evan McMullin instead). I expected to see some Catholics and Evangelicals choosing Trump as a lesser of two evils kind of candidate, but to see virtually no change in the data from 2012 to 2016 is, quite frankly, ponderous. Donald Trump has had multiple marriages, a very public recent scandal involving allegations of sexual assault, a recorded admittance to engaging in sexual assault, open support for gay marriage, and complete silence on other so-called “non-negotiables” like assisted suicide (which was on the ballot in one state this year, and passed). He paid lip service to the pro-life constituency but had very little concrete to offer, besides an opinion that Roe would be overturned automatically after his appointment of Supreme Court justices. Among Trump supporters, over 60% don’t think he is fit for office.

First, what I want to know is what would change these numbers? Personally, if Clinton had been operating under pro-life assumptions, even if her stance didn’t exactly align with my own, I would have voted for her in a heartbeat. I saw a lot of Catholic media trying to persuade Catholics that nothing positive in Clinton’s campaign offers a proportionate reason for voting for her because of her pro-abortion position. Is it possible that Democrats could shore up the Catholic vote if they adopted a pro-life stance? Would we see 75, even 85% of Catholics turning out for a pro-life Democratic platform?

Second, I want to know why we don’t see more third-party support among those with strong Christian religious affiliations. It is clear to me that neither party aligns with Christian values, especially when it comes to Catholics who have explicit principles guiding political participation, as we see in Faithful Citizenship. Yet, I continue to see Christians generally and Catholics specifically choosing one of the two parties to throw their support behind. I spoke to a Catholic this week who said basically that her vote will always be a vote against Democrats so long as they continue to support abortion rights. She doesn’t think of herself as Republican, but she votes down ballot Republican simply to undermine Democrats. This is interesting because, while abortion is obviously an important political issue (the most important, I’ll grant), I don’t think the church’s guidance supports making this the only issue that motivates political participation, much less supports turning a vote into anything to undermine the other pro-abortion party. I wonder how Catholics will have any influence on public life so long as their vote is so tied up in the two-party system.

Catholics and Evangelicals have so much to bring to the public square, and while I can’t speak for Evangelicals, I do think Church leaders do a good job guiding the faithful to recognize their political responsibility to promote the common good in more ways than simply opposing abortion. So why don’t Catholics show a stronger showing in voting for a third party?

Finally, I want to know why there is such a radically different political stance between white and Hispanic Catholics and what can be done about it. Last year, I lived in Austin TX in a community almost exclusively consisting of Catholics in this country illegally. These people live in constant fear of deportation for themselves or their family members. It makes sense to me that Hispanic Catholics would oppose Trump (though a quarter of them still voting for him boggles my mind), but I don’t understand white Catholics who worship in an increasingly Hispanic Church not also shifting away from Trump in solidarity with our Hispanic sisters and brothers.

So, contributors and readers, help me make sense of the data. What is it going to take to change the Catholic vote?