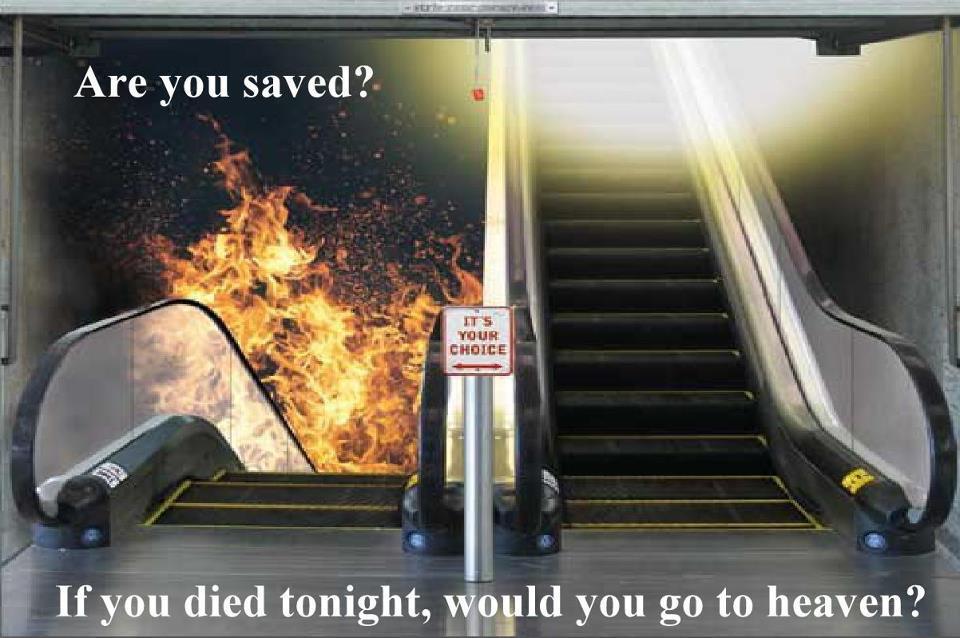 Beth Haile always writes excellent posts, and I benefit a great deal from reading them. I particularly enjoy her commentaries on the lectionary. In her most recent commentary, Haile recounts a story that her priest told during his homily. The story involves an encounter with an “Evangelical” Christian. Haile describes her reaction to the story as follows:

It was an uncomfortable story for me, and I imagine many others in the congregation. In Texas, there is a lot of evangelizing going on, and while the conversations can be pleasant, more often than not they end as this priest’s did, with the evangelizer asking if the person was “saved.” The priest related the man’s words, “Unless you have a personal relationship with Jesus, you are going to burn in hell!”

Haile proceeds to contrast the just mentioned view with the Catholic view, noting that, from the Catholic standpoint, “the question about whether a person is saved or not is really not a good question” and this for the very sensible reason that Catholics do not presume to know “who, if anyone is in hell.”

One implication that could be drawn from Haile’s argument, then, is that the source of discomfort and unpleasantness in encounters wherein Evangelicals seek to evangelize Catholics is profound theological disagreement with regard to the nature of salvation, and I think that there may indeed be numerous instances in which such is the case. The Catholic and the Evangelical simply believe fundamentally different things about what salvation is and how it works. However, in this post I wish to draw attention to an alternative set of cases. I think that it often happens that Catholics and Evangelicals agree with each other far more than the meanings they respectively assign to words allows them to recognize.

Notice the potential for misunderstanding and miscommunication here. To the Evangelical mind, the Catholic who states that he or she does not know whether he or she is saved is saying that he or she does not know whether or not he or she has a relationship with God. The Evangelical, then, is understandably perplexed by what he or she interprets as the Catholic’s total misunderstanding of the nature of God’s grace and love. But this is not what the Catholic who properly understands his or her own doctrines intends to say. As Haile rightly observes, the Catholic “emphasis on good actions is not about earning God’s grace, but rather, accepting God’s grace as merciful love and offering that same merciful love to those around us.” The Catholic, on the other hand, thinks that when the Evangelical confidently proclaims his or her salvation he or she is attesting to a capped off level of moral perfection and holiness he or she has already, and rather easily, attained in this life. But the Evangelical who properly understands his or her own doctrines does not intend to say that. Rather, the Evangelical understands holiness as a legal fiction God imputes to us through faith in the Blood of the Lamb. Whether this initial fiction must become a reality through the appropriation of Christ’s grace in order for salvation to be complete is the real point of disagreement. However, the discussion rarely makes it that far, because the two sides have not understood each other well enough to properly understand the nature of their disagreements. Sometimes I wonder whether they really care to understand.

This being stated, I do not think that there is anything wrong with the question “are you saved” just like I do not think there is anything wrong with the question “are you married.” They are both perfectly reasonable questions to ask someone and they both request simple yes or no answers. I don’t think Catholics should hesitate about saying “yes, I am saved” when that means incorporated into the Body of Christ through the superabundant grace obtained on Calvary, forgiven for my sins, and returned to right relationship with God through Christ. However, Evangelicals should recognize that, just as “are you married” is a very different question than “are you a perfect spouse,” so “are you saved” is a very different question from “have you benefited from Christ’s grace as much as you should have? Have you attained holiness?” Perhaps from there the two could move to a more edifying conversation about their respective views regarding the role of good works and character in the Christian life.

One last point and I am finished. I think that Haile is absolutely correct to contrast the Catholic view of hope with the “Unless you have a personal relationship with Jesus, you are going to burn in hell” point of view. One of the recognitions that inspired my own transition from the Evangelical faith in which I was raised to the Catholic faith is that the Catholic is more interested in pursuing heaven than avoiding hell. Intentional or not, the import of statements like the one recounted by Haile’s priest is that Heaven is desirable mainly as an alternative to damnation. This is an inversion. In truth, heaven is a reality so pulsating and actual that it demands the lion’s share of our attention. Heaven is the object of our journey. As a shadow is to a person, so hell is only intelligible as the deprivation of that joy for which we were created and to which all are called.