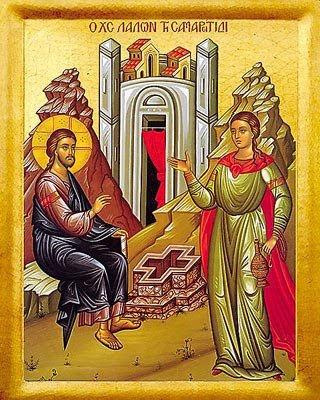 The readings for this third Sunday of Lent remind me quite vividly of the story which Pope Francis has told on many occasions regarding the event which initially led him to consider his vocation to the priesthood. It was such a formative experience for him that it became the inspiration for his episcopal motto, miserando atque eligendo. As the Vatican website explains it, the motto comes from the venerable Bede’s commentary on the calling of St. Matthew:

Vidit ergo Jesus publicanum, et quia miserando atque eligendo vidit, ait illi, ‘Sequere me’. [Jesus therefore sees the tax collector, and since he sees by having mercy and by choosing, he says to him, ‘follow me’.]

The literal translation of the motto is thus “by having mercy and by choosing.” Bede’s homily still appears in the Liturgy of the Hours on St. Matthew’s feast day. The Vatican description then goes on to explain the particular place of this feast in the life and thought of Pope Francis:

In fact, on the Feast of St Matthew in 1953, the young Jorge Bergoglio experienced, at the age of 17, in a very special way, the loving presence of God in his life. Following confession, he felt his heart touched and he sensed the descent of the Mercy of God, who with a gaze of tender love, called him to religious life, following the example of St Ignatius of Loyola.

Pope Francis described the same incident in more detail in an interview he gave while was the Archbishop of Buenos Aires,

‘Something strange happened to me in that confession. I don’t know what it was, but it changed my life. I think it surprised me, caught me with my guard down,’ he recalls more than a half century later. Bergoglio now has his own theory about that mystery: ‘It was the surprise, the astonishment of a chance encounter,’ he says. ‘I realized that they were waiting for me. That is the religious experience: the astonishment of meeting someone who has been waiting for you all along. From that moment on, for me, God is the One who te primerea—“springs it on you.” You search for Him, but He searches for you first.’

Is that not exactly the sort of experience we hear about in the Gospel for this week?

The declaration of the Samaritan woman that she “sees” that Jesus is a prophet is immediately followed by a question about right worship: should we worship here, as Samaritans believe, or in Jerusalem. Clearly she had wondered about the true answer to that question. Clearly she had done some “searching” of her own. Would it perhaps be so outlandish to speculate that she might have even prayed directly about it? All the same, it seems very unlikely she would have asked anyone in authority about it. In John’s rendering, it certainly comes out as a question she had been dying to ask for a long time.

It is Jesus’ revelation of the state of her earthly relationships that gives her the courage to ask him the question. How astounding that she is now able to address it not only to a Jewish man, but to one who is clearly a prophet!

She has been married five times, and the man with whom she now lives is not her husband. How many wounds, how much brokenness are disclosed in those lines! To what depths must she have sunk within her community and in her own self-understanding! And yet it is on her routine trip to the well, undertaken at mid-day doubtless in order to avoid the disapproving gaze of others, that she finds someone waiting for her.

How many broken resolutions, how many abandoned intentions must have lain in her past! How many plans of escape ruled out or foiled! And yet it is precisely when she least expects it that God “springs” His mercy upon her. A stupendous surprise, the astonishment of a chance encounter that was anything but chance—that is the experience of the one who truly encounters the Divine Mercy.

This mercy is always waiting for us, always “going ahead,” always anticipating. If God is the te primerea, God is also the magis: the always-greater, the always-beyond, the always-more-generous. Yet such a vision of God is often also beyond our ability to embrace and accept. How could it be that God is waiting for me? Doesn’t he have more important things he could be doing?

“How can you ask me for a drink?” she says. In the story of the Israelites at Massah-Meribah, God is the one who provides water for the thirsty people. Now it is God who asks for a drink, and the forbidding “rock” he encounters is the heart of the Samaritan woman, which is the heart of us all. God is always knocking, always asking, but it is we who are unyielding—unwilling to abandon the atrophied worlds to which we have become so accustomed.

We are so thirsty! And yet we do not realize it. We have become numb and desensitized. It is God’s thirst for us that awakens how thirsty we truly are for His mercy. God only asks that approach him, that we encounter him. He only asks that we stop and wait and see Him “already there.”

“If you only knew who was asking… you would ask him for living water.” May we thirst for the living water of God’s mercy this Lenten season, and discover anew the Grace which is always going ahead of us, always waiting for us around every bend.

Twenty-Third Sunday in Ordinary Time: Foundations of the Moral Life

Repent! The Third Sunday of Lent