22nd Sunday in Ordinary Time- Laws and the Household of God

The readings at their core deal with the notorious tension between law and grace in Christian faith, a tension that has been present since its earliest days. The first reading expresses the deep delight which the Jewish people have taken (and continue to take) in the law they have received from God. It is for them a sign of God’s preferential love and covenantal bond with them; to keep it is to have life, and to acknowledge God’s unfailing promises to them. The gospel reading, however, seems to cut against this celebration of the law by pointing to the way in which it can foster duplicity, pride and insensitivity. In the one case it is an instrument of life and a sign of God’s intimacy with his people, while in the other case it is an instrument of sin and death that alienates us from God’s justice. So which is it?

No doubt many will place this tension in very different contexts, but in my case I cannot help but hear the dissonance between these passages in a familial, domestic key. Like any parent, I tell my kids to do things all the time. In fact, I tell them to wash their hands several times a day. One might even say that there is a kind of “law” in our household that one needs to wash their hands before sitting down to a meal. (I can only wonder, with some apprehension, how my children might relate this passage to our normal routine!) This domestic “law” has in miniature all the features of law which are at issue in this week’s readings: it is a specific precept given by a legitimate and loving authority, it is intended to protect and cultivate the well-being of those to whom it is given, and it can nevertheless be the occasion for alienation, strife, injustice and even personal harm (when the sink and stool get too slippery from too many hands around the faucet).

One may imagine or even remember the familiar exchange that often takes place: “OK, go wash your hands; it’s almost dinnertime” followed by “I don’t want to wash my hands! They’re not dirty!” followed by “yes they are, now go wash your hands… with soap this time!” followed by “I can’t even see any dirt, though! Why do I have to wash my hands?” Even the best of parents—the ones who can patiently and deftly explain germ theory to their children at this moment when they are hungry and ill-tempered—can find themselves descending to the basest imposition of raw power, that very act of oppressive domination which we ourselves swore in their childhood we would never inflict upon our own children: yes, I mean the utterance of those four vicious words— “because I said so.”

With those words, the patina of tranquil friendship between parent and child falls away, and the manipulative power games begin. The child who has just suffered this raw imposition of power and complied to its dictates sees another child who hasn’t, and so of course takes the opportunity to impose this power on them in a similar way. One can easily imagine where it goes from there. No theft, murder or adultery are usually involved here, but as the situation descends there can very easily be instances of malice, deceit, envy and even blasphemy if the parent gets sufficiently frustrated by it all. Yes, Jesus’ words ring all too true.

So should I abolish my hand-washing “law,” as Jesus apparently did? Should I teach my children that it is not really important whether they actually wash their hands, but only that they maintain their purity of heart? Even should there be a miraculous conversion of heart in the face of the various ways we misuse this hand-washing “law” in my household, the exigency of basic hygiene remains; and that opens up to us a glimpse of a vitally important, yet too often forgotten aspect of law: there is something about the world that makes sense of the imposition of law by a rightful authority. Law, at least in the Judeo-Christian worldview, is not wholly reducible to power. As Aquinas famously put it, law is fundamentally an ordinance of reason, meaning that it is ultimately grounded in some truth about the world which is acknowledged by our intellect and not merely the product of our will. Law is thus not merely an arbitrary test or safeguard of compliance; it is rather the sign of an intellect intervening on behalf of another. In the case of parents, this intellect relates both to the children as well as to the world which they share in common. (Namely, there are germs in it and I don’t want them to make you sick.) Though it is true that God creates the world to which he relates us, it is clear from the scriptural testimony that this same triad is at work in the law which he bestows upon his people.

We see here perhaps the key to maintaining the proper tension between law and grace in the life of faith. God’s law is not merely an alternative description of himself, not at least as it is presented to Israel. It is distinct from himself; it is meant to be conceived as a gift which mediates and binds others to himself. It is an occasion for a mode of relationality that is not wholly external (like the physical “laws” governing germ theory), but rather draws rational creatures in their entirety to a lawgiver. In other words, the legal dimension of God’s covenant with Israel is, always has been, and always will be ordered to the personal dimension which is its fulfillment.  To put it in domestic terms: the washroom leads to the dining room, where (ideally) the persons of a family can share, enjoy and celebrate one another’s company around a common table and in a common world.

Usually in my own household the pathologies surrounding the “law” governing hand-washing usually dissolve once everyone has gotten some food in their stomachs, but all too often we come to the table flustered and resentful, and even ask the Lord’s blessing on the meal in that state as well. That is a shame and a loss, since the parent-child relation and the common meal are two of the most popular images that Scripture uses to describe what God’s relationship to us and His kingdom among us looks like.

Lest this reading sounds all too domestic (and again, I apologize for its overly autobiographical tone), we should recall that these readings make clear that the fundamental link between the gratuitous quality of the law and the personal quality of our response to it is the relationship it establishes and maintains with respect to the poor. This criterion for the authentic practice of God’s law is by no means unique to the New Testament, and so it would be a fatal mistake to try to pit these readings against one another. While the ultimate goal of the law is to unite us to God, the readings clearly indicate that the principal measure of this union is our solidarity with the poor. For Christians, the ruling image and effective catalyst of this solidarity with the poor is the cross, which represents the fulfillment of the law on our behalf only to the extent that we embrace it and make it the pattern of our own lives and of our every action—even the most tedious of them, such as making sure the kids wash their hands before dinner. 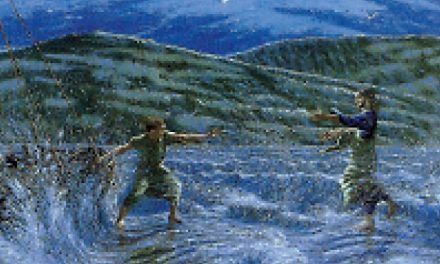