A recent study of the psychology of ritual behaviors yields some interesting insights. The authors argue that:

Our framework focuses on three primary regulatory functions of rituals: regulation of (a) emotions, (b) performance goal states, and (c) social connection.

According to the APA dictionary, a “performance goal” was defined by American psychologist Carol Dweck as the

goal of demonstrating to others who may be evaluating one’s performance that one possesses a particular ability or other attribute.

The way that characistics (b) and (c) are about relations with others sheds light on one of the two seemingly damning charges Jesus lodges against the Pharisees in the gospel this week. Trying to understand what is really going on in this reading is crucial, for it is easy to be misled. The other charge of which the Pharisees are guilty is upholding merely human traditions. This is one of those charges that can easily be hurled in all directions, leaving no one standing. One might (wrongly!) criticize rituals of indigenous cultures or certain aspects of inculturated Catholicism – say, in Latinx Catholicism or African-American Catholicism – as venerating “human tradition” excessively. Obviously, keeping human traditions is a valuable part of our human make-up, connecting us across time. So, as with many other aspects of the Gospel, Jesus should not be understood as offering a simple, detachable aphorism (“dump human traditions”), but an insight embedded in a narrative. Detach the aphorism, and destruction ensues.

How is the insight embedded in a larger narrative? It seems to me it is crucial to connect the critique of human tradition back to the critique of specifically ritual behavior. The two should belong together. The ritual behavior of the Pharisees that is criticized here is their attention to ritual purification before meals. The insight from the psychologists helps us see that such behavior makes one feels “successful,” especially in the eyes of others. We might call to mind another story of Christ, that Pharisee and the publican (Luke 18:9-14). The Pharisee in that story thanks God for his great “accomplishments.” Moreover, it visibly bonds together all the “successful” performers. This is a powerful social bond – and, quite obviously, an excluding one. One must see this critique from within Jesus’ well-known practice of table fellowship with various “sinners.”

Again, the insight here is not a detachable one, “let’s get rid of ritual.” Rather, we need to be alert to what is going on with our relations to our neighbors when we stress rituals. One might think about how, as we experience “masking 2.0,” the mask has become a kind of ritual symbol that now seems to go far beyond prudential decisions about different sorts of social situations with strangers and the possibility of contamination. Some aspect of masking has become a way of “separating” us from others, and depicting a certain kind performance goal. And indeed, Jesus’s words in the Gospel also note that the focus on external behavior actually masks (pun intended) the real “threat” to us, which is malice, envy, arrogance, and the like, all of which are far too prevalent in hearts as masking debates proceed.

I’m not writing against masks. I’m pointing out the problems of relying on ritual behavior as a key to the moral sifting of society into good people and bad people. The Pharisees’ rituals surrounding meals have that effect. Jesus’ is warning them: the real contamination comes from within, and that is always what the commandments of God have aimed at. They aim at the ways our hearts turn on the neighbor and (ultimately) on God.

Who would not wash their hands before eating these days? The real issue here is not the handwashing. It is to some extent the connecting of the ritual to a source of authority that might not be the right one (this is the problem with the “human tradition”), and more pointedly, using that authority to visibly sift others around us into good people and bad people. That sorting of our neighbors, inevitably placing us on the side of the good and righteous, is what defiles. 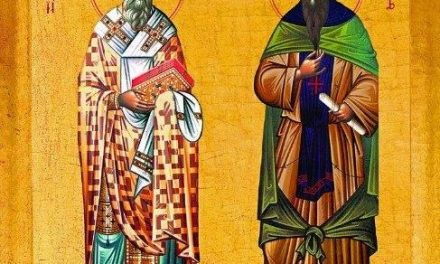