When I was in college, the Jesuit who was in charge of the Sunday liturgies decided that lectors would no longer say “The Word of the Lord” at the conclusion of readings.  Instead, we would say, “The Word of God.”  We were told that “Lord” was too hierarchical – a term that was incompatible with the equality and fraternity that Jesus proclaimed and modeled.  To put it kindly, I would say that policy was ill-advised.  To fail to refer to Jesus (or God) as “Lord” is to fail to recognize that although Jesus was born of the flesh and became one of us, he was also radically unlike us.  He was also Divine – someone who was “tested in every way” just like us “yet without sin.”  Rather than abolish the term “Lord” a Christian must redefine it based upon the words and example of Jesus.

In this Sunday’s Gospel, the disciples are given a lesson in what it means to lead.  If we go way back to the first chapter of Mark’s Gospel we find a very brief account of the moment when the first disciples were called from their lives as fishermen to become “fishers of men” (Mk. 1:17).  When they were called by Jesus, James and John “left their father Zebedee in the boat along with the hired men and followed him” (Mk. 1:20).   Today’s Gospel suggests that James and John may have been under the impression that they had been called not only to seek out the lost, but also to have a share in power and glory.  No wonder they ditched their father and followed Jesus so readily!  This Gospel also suggests that James and John believed that to lead is to be “the boss” or to give orders; “we want you to do for us whatever we ask of you.” But Jesus is not that kind of Lord, and that anyone who would aim to sit at his right hand or at his left must be willing to serve and even to suffer.

Jesus models a form of Lordship that is marked by compassion and service to others.  He does not hesitate to speak with authority or to ask a great deal of those who call him Lord.  Indeed, for the last two Sundays we have heard just how much Jesus demands of those who would follow him.   Even obeying all of God’s commandments is not enough!  We must also be willing to sell all that we have and give it to the poor.  In today’s Gospel there is also an allusion to the need for Christians to be willing to give up their very lives for Jesus and God’s kingdom: “Can you drink the cup that I drink or be baptized with the baptism with which I am baptized?”  In his ability to follow the commandments, show generosity to the poor, and enter into suffering for the sake of others, Jesus towers over his disciples, and yet Jesus does not “Lord it over” them.  He stands alongside them as a brother.

For those who exercise leadership in any capacity, there are many lessons to be learned here.   Of course the central message is that “whoever wishes to be great among you will be your servant.”  But what does this mean?  How can one lead and be a servant at the same time?  Although it is easy to spot faux leaders who are more concerned with glorifying themselves than in exercising leadership, it is considerably harder to articulate what real leadership looks like.   But these readings suggest two important ingredients: a true leader must be motivated by genuine concern and compassion for those she would lead.  It is love that drives Jesus “to serve” and even “to give his life as a ransom for many.”  Second, we must think about purpose or teleology.  Leadership is not exercised to amass power for its own sake, but in order to move people and organizations toward a better, more proper goal or end.  In this Gospel, Jesus says that “the baptism with which I am baptized, you will be baptized.”  We share an identity, as well as a vocation and a purpose.  A leader brings people along toward a shared goal.

Finally, we must remember that Jesus is not merely a model of leadership.  He also is truly Lord here and now.  He remains our companion and our true leader.  Hence, when faced with the daunting challenges before us, we should also call upon him for strength and for the grace to find our way.  For human beings alone, some things are impossible, but with God all things are possible. 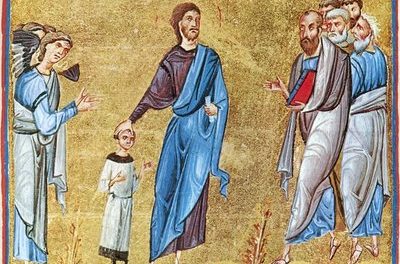