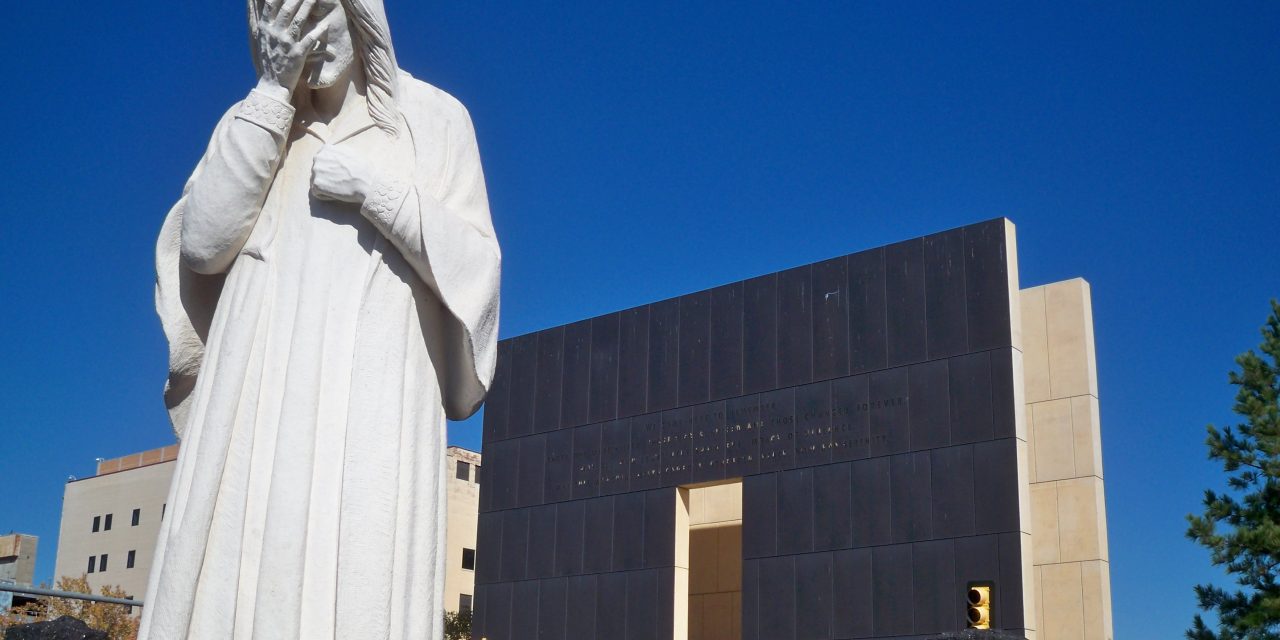 “Do you also want to leave?”

Stanley Hauerwas has a well-known saying that “liberalism is the story that you have no story except the story you chose when you had no story.” (Yes, you might have to read that again slowly!) By “liberalism,” Hauerwas does not mean the left or the Democratic party – he means classical political liberalism, where “freedom” names an absolute value of choice for the individual about any and every relationship they have. It’s equally embodied by consumer capitalism and by sexual libertarianism. It means ultimately we are self-defining individuals.

Hauerwas calls it “a story” in part simply to point out that this view is one among many worldviews – not a fixed fact about the world. But mostly, he wants you to recognize it for what it is: a fictional story, being peddled as the truth about the human person. The fact is, you do have lots of stories that you are playing a role in continuing that you didn’t choose; a reality that is more important than the idea of liberalism is that we emerge, for good and ill, from stories we didn’t and could never choose. When not recognized as such, this fiction that creates all sorts of problems. For example, it’s a fiction that precludes frank and sufficient acknowledgement that whites and African-Americans do inherit a story, certainly in the American context, that we have even if we didn’t choose it.

Hauerwas is most concerned to push back against the tendency – a particularly American one – to believe that relationship with God is a voluntaristic choice – your religion is the religion you chose for yourself when you had no religion. And of course that means if it isn’t working – or more seriously, if you feel the sting of betrayal from the religion – you can find another.

But the Christian story, like and in relation to the story of Israel, is explicitly a story about election – not our election of God, but God’s election of us. We do not choose; we are chosen. Even within this story, we have a kind of choice – but not really one that can be seen in voluntaristic terms. This Sunday’s reading do a great job of showing the relationship of God’s election and our choices. The choice is always God’s first. But nothing forcibly stops people from walking away. Joshua presents the people with a choice of gods, and says, well, my family will serve the Lord. This can look voluntaristic. But notice the people’s response: the primary reality to which they refer is the reality of God’s gracious action throughout their history. God has made them a people, so why would they go and serve other gods? What they are saying – in Hauerwas-speak –  is that God has already given them their story. Jesus gives his disciples an analogous choice – having chosen them, he wonders if they will also leave in the wake of his hard sayings about eating his flesh and drinking his blood (and really, let that sink in – wouldn’t YOU leave if someone started saying this?). Peter says “Lord, to whom shall we go?”

This is how I feel about Catholicism, a faith that I certainly never chose. When asked at difficult times, “Will you also leave?” I recall God’s work, I peer around at the other “gods” on offer, and I think, “Lord, to whom shall I go? You have the words of life.” This Word of God is the Word that is truly life. I’m still dazzled by receiving this gift of the Catholic faith. Because it is something received. I didn’t make it up or construct it. I came to me from others, long before I could have even the illusion that I was “choosing” anything. I’m sometimes grateful not to be a convert, so that I never could even pretend to have “chosen a story when I had no story.” This story has always been there. I’ve lived into it, recognizing all the ways in which the tradition has made it possible for anything like “my” life story to emerge. It is bigger than me, bigger than a nation or a generation; I do not choose the people, I simply am in this people.

And probably first and foremost, if I were asked to concretize the “great works of God” in my life, I would point to the people and communities I’ve received on my Catholic journey. I’m tempted to start reeling off the list right now: my parents, teachers, clergy, so many fellow music ministers, authors who have opened up so much wisdom, etc. Isn’t Catholicism great?

Part of the agony of this moment in the Church’s life is how obvious it is that a different, much uglier litany of “works” and of people are part of others’ lives… and, if Hauerwas is right, ineliminably now part of mine. Cut the romantic visions of Catholicism, and instead recognize that “being Catholic” now also means all these horrible betrayals!

What to do with that? How to continue to confess that the Roman Catholic Church is still “my story”? It is entirely understandable that people will anxiously and honestly grapple with what this means for them and their children to even be associated with this body. These struggles should be heard; if our communities are not capable of bearing these conversations and struggles about the manifest corruption of the Church, then this reveals more fundamental flaws in our living out the Gospel. I honor this struggle, and I’m glad that others here at the blog have shared theirs.

My answer ends up having to be something about election: this is still my story because it is still God’s story. Which is a very hard thing. Making sense of it is not some apologetics puzzle; it’s a matter of struggling in faith. How could God be such a fool? I’ve thought about Herbert McCabe’s editorial against leaving the Church in a crisis in 1967. Fr. McCabe was a British Dominican who wrote a number of the best books of Catholic philosophy and theology of the twentieth century. His books on the sacraments and on Catholic ethics are essential reading. He was also the editor of the British theology journal, New Blackfriars, and as Matthew Boudway of Commonweal recalled a few years ago, McCabe wrote blisteringly:

What does not need to be endured indefinitely is the special irrelevance of so much of the behaviour of Church officials. Alongside the actual agony of growth in the Church there seem to be these men playing a private game amongst themselves in which the moves are directives and prohibitions and the players score points for formally going through the motions of docility or of repeating the orders correctly. It seems to me that we should treat this game as we do the phantasies of adolescence or any of the other ways in which men escape from reality; we should combine a firm determination to get rid of it eventually with a certain tolerance of it while it is being played. While Church authorities are occupied with these domination games they are neglecting their true role. It would be quite unrealistic to expect them to be sources of enthusiasm and original thought, but it is their basic task to be the link between such sources, the framework within which they are kept in balance. To maintain this balance they must, of course, speak with authority, the real authority that comes with understanding and concern and listening to others; the authority that sees itself not in terms of power but as a service to the community…

McCabe was nobody’s idea of an apologist! But then why endure these games? Why not follow his comrade of the time, Charles Davis, out of the Church? McCabe concludes:

It is because we believe that the hierarchical institutions of the Roman Catholic Church, with all their decadence, their corruption, and their silliness, do in fact link us to areas of Christian truth beyond our own particular experience and ultimately to truths beyond any experience, that we remain, and see our Christian lives in terms of remaining, members of this Church.

McCabe was famously (though temporarily) punished for this criticism by being removed as editor of New Blackfriars. In his first editorial after being restored, he began, “As I was saying before I was so rudely interrupted…” By contrast, at least we hear bishops finally chastising themselves, as in the official statement from the USCCB, describing the “root cause” of this “moral catastrophe” to be “the failure of episcopal leadership,” acknowledging how deeply trust has been betrayed and literally begging for forgiveness. Is this sufficient? Certainly not! This is no time for anything but serious reform in the Church. But at least editors are not being fired for pointing out this corruption; bishops themselves are pushed to acknowledge it. That is not nothing.

McCabe’s point is that the Church is still the “apostolic” Church, still the framework held together by the (sometimes failing) apostles. He uses the somewhat-impersonal word “truths” to define that connection, but what he means is that the hierarchical institutions still provide an embodied realization of the human relationships across time and space that are constitutive of (and not just instrumental for) our redemptive relationship to God. Because we have deemed it so? No, because God has.

In this unalloyed commitment by God to a genuine, embodied, failing people, Paul likens it to the ideal of marriage in this week’s second reading, saying, “I mean this in reference to Christ and the Church.” Ideally – and certainly for many painful and complex reasons, which Amoris Laetitia reminds us we must engage with compassion, we fail to live up to this in our lives – marriage is about entering into a story that can never any longer be a story that you choose. To quote another Hauerwas aphorism, “You always marry the wrong person” – meaning you can never really “know” or anticipate everything it is going to mean to give your life into the hands of someone else, and even less to the lives that may arise from it.

Both human marriage and this marriage of Christ and the Church can be rendered in absurdly romanticized terms. Better to see it in the terms offered by Dorothy Day, offering an unromantic yet gorgeous understanding of the Church in ways that so many, clergy and laity, have clearly failed to live out – indeed, in ways that I certainly continue to fail to live out. Yet she is right; this story is no fiction. This is the story of genuine fullness of life:

But leave? Choose another story? Have a private relationship with God unsullied by, in McCabe’s words, “corruption” and “domination games”? I am mourning and angry because it’s inconceivable for me do that. And, as a theologian, I recognize that’s because God doesn’t do that. God judges sin, but God never abandons the covenant. Instead we are to learn the slow, painful, grace-filled work of reconciliation. And if God doesn’t leave, well, to whom shall we go?