This Sunday’s lectionary readings are all about God hearing the cries of his creatures. In the first reading, the prophet Jeremiah conveys God’s reply to his people in exile. The Lord urges them urges them to shout, exult and praise because of the deliverance promised to them. The remnant of Israel will return from “the land of the north,” from “the ends of the world, with the blind and the lame in their midst.” Though “they departed in tears,” they shall return “on a level road, so that none shall stumble. For I am a father to Israel…” The psalm then beautifully echoes this last line, proclaiming that “although they go forth weeping/ carrying the seed to be sown/ they shall come back rejoicing/ carrying their sheaves.” The reading from the Letter to the Hebrews then prepares us for the Gospel by portraying Jesus as the new high priest, chosen from among our race to be our eternal representative before God. The sacred author reminds us that this honor is not reflexive, but rather serves the glorification of the one who has accepted the sacrifice of this high priest whom he also calls “Son.” By the time we reach the Gospel reading, then, we should attuned to the significance and magnitude of the encounter which is about to be depicted.

“As Jesus was leaving Jericho with his disciples and a sizable crowd, Bartimaeus, a blind man, the son of Timaeus, sat by the roadside begging.” This first sentence of the reading is perhaps the most moving. Just picture the scene: Jesus is on the move, leaving one of the most ancient and populous cities in the Near East—a “perennial city” if you will—where merchants and street entertainers and beggars abound. The teeming tumult is only exacerbated by the lack of underground sewage; the scene is hot and frantic. A beggar, rife with the insistent stench of urine and sweat, cries out: “Jesus, son of David, have mercy on me.”

Here is the vagrant, the wretched flotsam of history, crying out to the Most High. Here is the afflicted one—Lazarus by the door—crying out to heaven. Here we see not only the everyday schizophrenic and alcoholic on the pavement of Chicago with his cardboard sign; no, we see ourselves. We see ourselves here, as folded into the history of all those who have cried out for mercy. We see ourselves alongside the innumerable chorus of the poor who cry out to heaven: alongside the Israelite slaves in bronze-age Egypt, the chattel slaves of 19th-century Charleston and the sex slaves of modern-day Ukraine. This cry of the beggar on the outskirts of Jericho is, in a very important sense, the one cry of humanity to God: “Jesus, son of David, have mercy on me.”

The man cries out. He cries out to Jesus, the “son of David.” How much is packed into that name, “David”! Who was David, after all, but one who was in greatest need of mercy? A murderer, an adulterer, a saavy politician: David is the legacy of human weakness, a true heir of Cain. What was it then that set him apart, that made him “a man after God’s own heart,” a worthy recipient of the promise that his dynasty would be everlasting? It could only be the very same characteristic that marks this lowly beggar: the humility to cry out for mercy.

The eternal high priest, the one who came among us to be our representative before God, is also “the son of David,” the son of the one whose heart was broken by the parable of Nathan, and the death of Absalom. To be the “son of David” is to be one whose heart can be broken by that which breaks the heart of God. And Jesus’ heart is broken by this poor beggar. Many in the crowd (many like me, most likely) tried to silence and rebuke the beggar. Nevertheless, Jesus’ heart is broken by his insistent, tremulous cries. “Call him,” Jesus tells his disciples.

“Take courage,” they tell him, “get up, Jesus is calling you.” Can you imagine what that moment must have been like for this beggar? Take courage. Jesus is calling you. Can we extrapolate that moment? Can we hear the cries of the countless beggars among us and say “take courage; get up, Jesus is calling you”? So the beggar “threw aside his cloak, sprang up, and came to Jesus.” Here is the encounter: here is Israel before the Pharoah’s slavedrivers, Zedekiah watching his sons die, the mother beholding her martyred children in Maccabees, the prisoner of Dachau before the gallows. And the only important question at this moment is: does God hear? Will the cries of his people avail anything?

The resolution of the drama, of course, is already in the first sentence of the reading: we know his name. His name was Bartimaeus! How astonishing! The Gospel tells us the name of this nameless beggar! Even more moving is the fact that it tells us the name of his father, Timaeus. What are we to make of that? Yes, perhaps these two became iconic members of the early Christian community out of which this text was written. Even more significantly, though, the reading tells us that the beggar had a name.

Do we even think for one passing moment, as we pass the beggars in our midst, that they each have a name? Does it cross our minds that these wrecks of lives which we behold us on the street were once tenderly held in the arms of a mother or a father? That someone looked into their eyes and thought, at that moment, that they were the whole world? How wonderful that the Gospel gives the beggar a name! Is it not interesting and telling that we have no record of the name of the young man from Matthew who was so rich and so righteous, yet went away sad from his own encounter with Jesus? Yet we know the beggar’s name, and we know that he too was a son.

Jesus gives him not only the dignity of naming him across the generations, but of asking him what he wants. “What do you want me to do for you?” Jesus has pulled this strange stunt before, most notably with the man sent to the pool of Siloam and the man he heals at the pool of Bethsaida. Do you wish to be healed—what kind of question is that? It is the question presented to those with the incomparable dignity of freedom.

The God of Israel, the God who became flesh, hears the cry of the poor. Yes, but it bears asking: why does this God permit the poverty that causes the cry to arise in the first place? Suffice it to say for now that the cross of Christ reveals once and for all God’s opposition to and triumph over the evils of this world. But even here in this individual healing, we gain a glimpse of the healing which Christ bestows to the whole world.

Like the blind man, the crippled and the disciples in the storm-tossed boat, Jesus waits for us all to cry out to him. We must get to the point where we can longer blithely assume that everything “is in God’s hands” and will automatically turn out for the best. God desires that we cry out to him, that we tell him with desperate insistence what we need: “Lord, do you not care that we are perishing?”“Son of David, have mercy on me!” “Master, I want to see!” “Yes, I want to be made well!”  These phrases have served as aspirations throughout the history of Christian prayer, and entire traditions of spirituality have evolved around them, most notably the Orthodox practice of Hesychasm. So we too might do well to incorporate these phrases into our own daily lives as ready vehicles for placing our own ever-present needs and afflictions before the One who hears the cry of the poor, who gathers his people from the ends of the world, “with the blind and lame in their midst.” 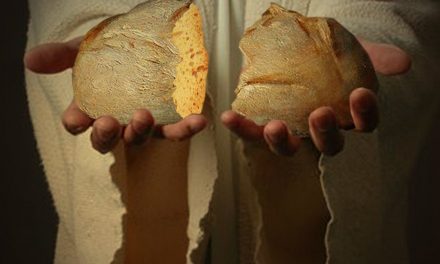 “Thy Kingdom Come” – The Seventeenth Sunday in Ordinary Time

Twenty-fifth Sunday in Ordinary Time: Which Master Do You Serve