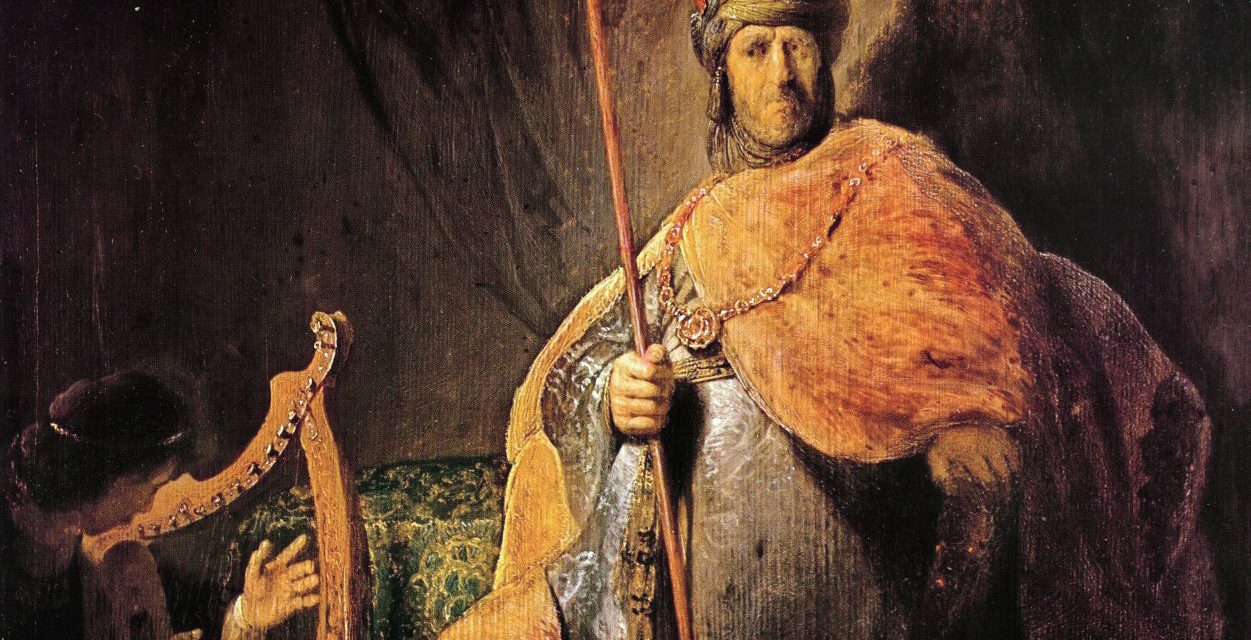 Today’s reading from 1 Samuel depicts David sneaking close enough to his enemy Saul – close enough to kill him – but making off with Saul’s spear and water jug. This is actually the second time David has sneaked close to Saul – the first time (1 Samuel 24:1-5), he cuts a piece of tunic off Saul’s robe. In both cases, David names Saul as the Lord’s anointed, and we get a sense of how God calls us to treat the Lord’s anointed.

In chapter 24, David is seriously worried because he believes that cutting the tunic of the Lord’s anointed is sure to bring retribution. So he goes to Saul, shows him cut tunic, and says:

See the end of your robe which I hold. I cut off an end of your robe and did not kill you. Now see and be convinced that I plan no harm and no rebellion. I have done you no wrong, though you are hunting me down to take my life. (v. 12)

Saul sees the end of the tunic and realizes David is treating him better than he, Saul, is treating David. And then Saul says:

For if someone comes upon an enemy, do they send them graciously on their way? So may the Lord reward you graciously for what you have done this day. (v. 20)

Today’s Old Testament reading is a reminder of that earlier interaction between David and Saul. Here again, David could kill Saul pretty easily – but he does not. Rather, David is trying to be scrupulously just to Saul, as well as faithful to God:

The LORD will reward each man for his justice and faithfulness.
Today, though the LORD delivered you into my grasp,
I would not harm the LORD’s anointed.

In so doing, David helps to further identify himself as a follower of God. He lives the virtues that enable him to love God and neighbor more and more – even though it would be easy to say both that:

But the significant fact is that David does not take this path; he does not narrate his relationship with Saul primarily as a set of events and circumstances in which can say: God providentially wants me to act against my enemy.

Rather, David is focused on the person of Saul. In fact, his story emphasizes that regardless, Saul is the Lord’s anointed. That names who he is – and therefore names how to treat him.

Of course David’s words about the Lord’s anointed follow us to the Gospel reading. Here is the famous passage where Jesus says: “Turn the other cheek.” “Give to everyone who asks of you.” “Love your enemies.”

Note that both the events and the person matter in Catholic moral theology. But the theological question is what gets prioritized in the narrative?

For Christians, it is no mistake that we worship a Person, who is God Incarnate, who helps us name who we are, and who our neighbors are. It is likewise no mistake that when we are baptized into the life, death, and resurrection of Jesus Christ, we are reborn, we become new creations.

And then – we are anointed to be the Lord’s.

In other words, we are asked to treat each other as the Lord’s anointed. We are asked to emphasize the person first. And, I think this baptismal shaping of our vision spreads to others, even those who are not yet baptized – for example, the unborn.

Person-first visions help us shape our moral vision of many hot button issues (yes – those issues that sometimes make Catholics out to be crazy….)

And more. Let us today seek to treat others as the Lord’s Anointed.