Marriage and Divorce, Burden and Liberation 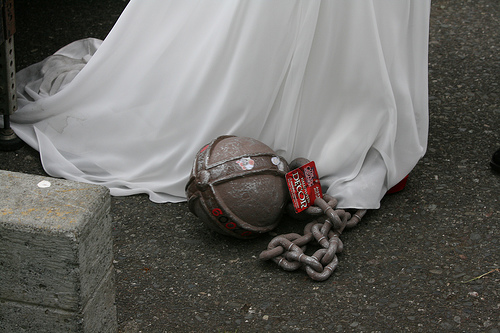 One of the most contentious issues at the recent Extraordinary Synod of Bishops on marriage and the family was the question of divorced Catholics who have re-married, and in particular whether they should be able to receive communion, but also whether, for example, the annulment process should be simplified to allow legally divorced Catholics to more easily enter into a sacramental marriage. This synod was only preparatory, and another gathering of bishops will take place later this year, an Ordinary Synod of Bishops, whose decisions will serve as the basis for pastoral directives issued afterwards by Pope Francis.

The period between the synod is intended as a time of reflection and discussion, but on this issue, the positions seem to be set: some argue that the current practices of forbidding communion are unmerciful, and that the divorced should, after a period of penance, be allowed a second marriage, although perhaps not a sacramental one; others argue that the teaching of Jesus is clear, that marriage is indissoluble, and that such a change risks undermining that teaching. It is entirely possible that, with this disagreement still in place, a decision could be made one way or the other through the sheer will of a majority of bishops, but the danger here is that the “losing” side will remain alienated from the decision, worsening the already-existing rifts in the Catholic Church. A much better approach would be to use this interim time to look at the question in new ways. Often, asking unexpected questions, looking at the problem from unusual angles, and thinking creatively can open up a space for compromises, or changes in heart and mind, leading to greater consensus. With that in mind, I offer the following reflections in the hopes of spurring fruitful discussion of the issue.

In an issue of the Jesuit magazine America several weeks ago, a reader wrote the following in a letter to the editor:

As a married woman for 50 years, a mother of six, grandmother of 14 and great-grandmother of three, I feel I am qualified to respond to “Remarriage, Mercy and Law” (Editorial, 9/22).

For over 40 years, I have taught religious education in various parishes and served several terms on democratically elected parish councils. This background has provided me with many occasions to deal with marriages not approved in our church. I have witnessed sorrow, pain and damage to families who struggle to remain faithful, absent full acceptance in our churches. There have been times I have remained in the pew at the Eucharist as I have felt unworthy to climb over a family banned from the sacrament.

In Shakespeare’s “The Merchant of Venice,” the woman Portia says: “The quality of mercy is not strained./ It droppeth as the gentle rain from heaven/ Upon the place beneath. It is twice blessed:/ It blesseth him that gives and him that takes.” Where in canon law is the voice of Portia, urging, “mercy seasons justice”?

I think this letter expresses the sentiment of many seeking significant changes in church practice: current church law, even if grounded in Jesus’ teaching, is overly burdensome for the divorced seeking to live a Christian life, and indeed provides an obstacle rather than an aid in living out their Christian vocation.

On reading this letter, however, it was immediately juxtaposed in my mind with one of Jesus’ key sayings on divorce, from the Sermon on the Mount in the Gospel of Matthew:

This passage follows the same pattern as several other sayings of Jesus in the same section of the Sermon on the Mount, in which a traditional teaching familiar to his listeners, in almost all cases based on Old Testament law, is contrasted with Jesus’ own teaching.

In their book Kingdom Ethics, Glen Stassen and David Gushee propose that each of these sayings consists in a triad, in which 1) the traditional teaching is 2) explained to result in a vicious cycle, and then 3) a “transformative initiative” that breaks the vicious cycle is proposed. For example, Jesus says to his listeners that they have heard, “You shall not kill; and whoever kills will be liable to judgment,” but Jesus warns that even those who become angry will be liable to judgment (5:21-22). The point here is not so much that there is no difference between killing someone and being angry at them, but rather, as Stassen and Gushee propose, that anger is the starting point of a vicious cycle, the end point of which is murder. The goal is not, then, to hold sin at bay by means of the law, but rather to escape the vicious cycle entirely through a transformative initiative (the pattern therefore echoes Paul’s teaching that we are saved by grace, not by the law). In this case the initiative is to “go first and be reconciled with your brother” (5:24); we can avoid the vicious cycle that leads from anger to murder by seeking reconciliation with those who have angered us.

Stassen and Gushee argue that while in many cases the full triad is present in Jesus’ teachings, in others one of the elements remains implicit, and unfortunately this is true in the above saying on marriage and divorce. The traditional teaching, obviously, is the Jewish law’s toleration of divorce, and, as Stassen and Gushee claim, Jesus’ linking of divorce and adultery is his description of the vicious cycle. What is missing is the transformative initiative to break out of the vicious cycle; Stassen and Gushee propose that we can fill in this gap by looking at Paul’s teaching in 1 Corinthians 7:11, where the apostle urges spouses to be reconciled rather than to divorce. This conclusion fits well with the transformative initiatives proposed in other passages of the Sermon on the Mount, most of which also focus on various forms of reconciliation.

So in Jesus’ teaching, it is the law permitting divorce which is in a sense burdensome; it traps married couples in a vicious cycle and keeps them from fully living out the beauty of their marriage. It is the permanence of marriage in Jesus’ teaching which is liberating, or rather it is the liberating power of the Gospel that enables Christians to engage in the transformative initiatives that make permanent marriage possible, that enable Christians to live out a marriage that reflects Christ’s love for the church.

My point here is not to play “Gotcha!” to the letter writer quoted above and those with similar sentiments; on the contrary. I think the juxtaposition of the letter and the above interpretation of Jesus’ teaching raises two challenging questions for all sides in the ongoing debate on divorce and remarriage.

1) How has the Catholic Church failed in its marriage preparation, pastoral guidance for married couples, ministry to divorced couples, and canon law, such that what Jesus proposes as a liberating teaching is now experienced by many as a burden imposed on them by the church?

Many might respond by saying that the church is not at fault, but rather the culture, which proposes that any obstacle to what we have decided will make us happy is an intolerable burden. Although this might be true for some cases, I think that the letter writer is correct that in many other cases, a man or woman has legitimately come to the conclusion that the sacrament of marriage is their vocation, their path to communion with God, but perhaps through little or no fault of their own, their marriage has fallen apart. In a situation like that, how can the church transform what to many is experienced as a burden into something liberating, as Jesus intended? And that leads to my second question:

2) What would it look like for the sacrament of marriage, as well as the Catholic Church’s marriage preparation, pastoral guidance for married couples, ministry to divorced couples, and canon law, to truly be the transformative initiatives Jesus calls them to be?

It seems that some of the defenders of the indissolubility of marriage who oppose changing the church’s practices think that simply re-affirming the church’s teaching is enough to unleash the liberating power of Jesus’ ideal for marriage, but the current crisis of marriage in the church is proof that this is not the case. We need more creative thinking on how married couples, and the church that provides them with support, can fully live out Jesus’ ideal.

My questions are posed not just to spur discussion, but as an attempt to seek common ground; all sides in the debate on divorce and remarried agree that the beauty of marriage is only fully expressed in permanence, that divine grace is needed to achieve that expression, and that in some sense divorce is linked with sin. I believe that a fruitful dialogue in response to these questions could build an even more solid common ground that could serve as a basis for the upcoming synod’s deliberations.