I submitted the following response letter to the New York Times regarding “The Good Pope and His Critics” by Ross Douthat (Mar 18, 2018, p. SR1). Although I have had good success in getting letters published there over the years, this one apparently did not make the cut—so I’m posting it here for the record:

Douthat worries about how the papacy of Francis is propelling “Catholicism’s transformation into a confederation of national churches.” However, Douthat himself already reflects such a nation-colored lens when he projects onto worldwide Catholicism “the culture war that everyone in Western society knows well.” The language of “culture war,” especially when it hinges primarily, as evident in Douthat’s piece, on sexual ethics is an obsession found mostly among neo-conservative U.S. Catholics.

Even if concerns about sexual morality are expressed also with Catholics who are “conservative in sub-Saharan Africa,” the “geographical divisions” Douthat flags are not so simple or sealed. After all, Catholics in the global south and so-called “liberalizing” Catholics in Europe and the U.S. agree with Francis’s amplification of his papal predecessors’ teachings about the environment, peacemaking, criminal justice, and the economy. As evinced by his encyclical on ecology, Pope Francis’s influence on many of these questions is complemented by, but not reduced to, his public gestures that imitate Christ.

In short, Douthat might find “in the [wider] mirror” there are many of us Catholics, in the U.S. and elsewhere, who find the “culture war” binary less reflective of who we are, and that the “conservative” or “liberal” labels are less descriptive and not very helpful. 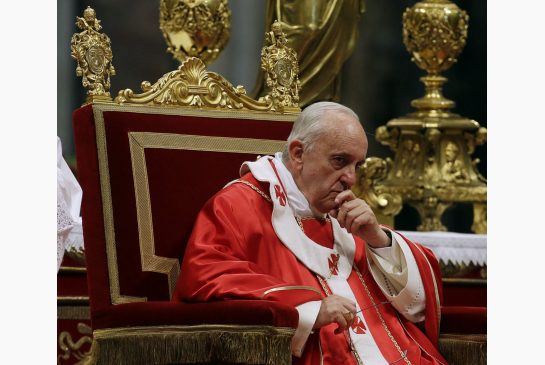